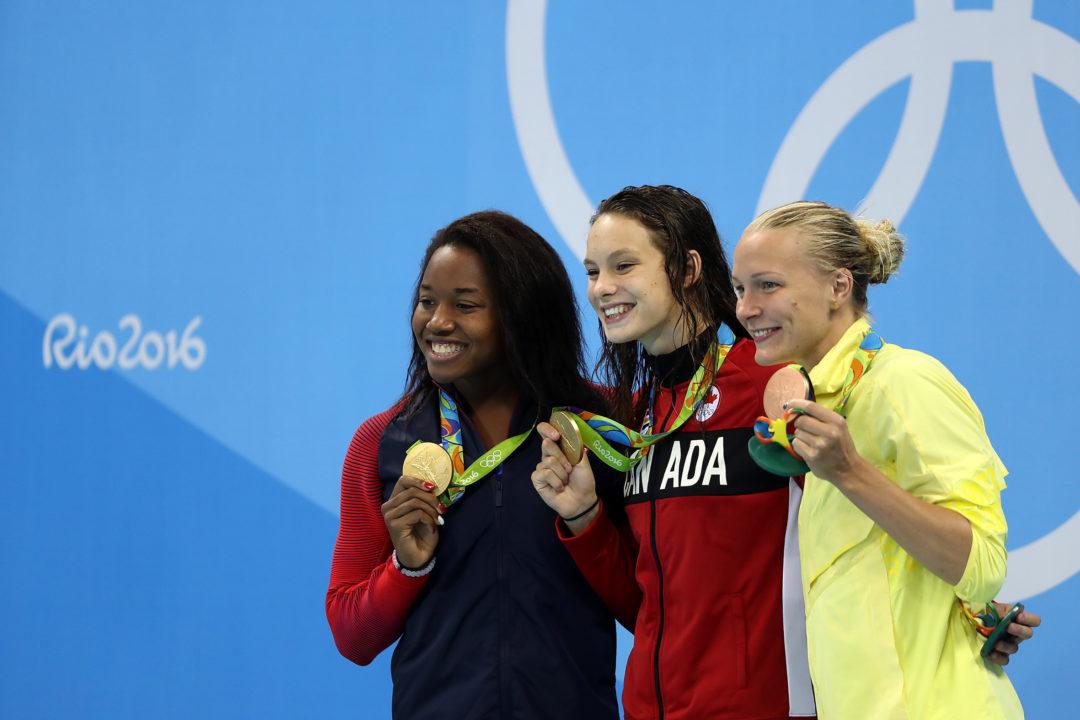 Young Canadian star Penny Oleksiak continues to reel in accolades after a stellar summer in Rio and continued success on the... Archive photo via Simone Castrovillari

Young Canadian star Penny Oleksiak continues to reel in accolades after a stellar summer in Rio and continued success on the international stage at the 2016 FINA World SC Championships. This week, she was voted the Female Athlete of the Year by the Canadian press in a landslide victory. According to an article from Canadian Broadcasting Corporation (CBC), Oleksiak took a whopping 94% of the votes in an annual survey given out to numerous news sources across Canada.

Oleksiak tied with American Simone Manuel for the 100m freestyle gold in Rio in a stunning upset over the Aussie Campbell sisters and Swedish star Sarah Sjöström. Additionally, Oleksiak was a key leg on Canada’s freestyle relays, where they earned bronzes in both. She continued to act as Canada’s sprint leader with a bronze medal in the 100m free and impressive relay showings at the 2016 FINA SC Worlds in Windsor this month.

At the start of the Olympics, when the Canadian women’s 4×100 free relay got a bronze, the Canadian networks went crazy.

They interviewed the bronze medal team like 3-4 times. Canada was so thrilled.

If Penny continues to swim well, she will be a Michael Phelps kind of swimming star in Canada.

It is hard to imagine Penny Oleksiak doing IM. Where do you think she will progress most?
100 free? There are good prospects keeping in mind that current leaders will be quite “old” in 2020.
Or she going to be a flyer. She may have tough competition in this area. I don’t think Sarah Sjostrom will be beaten up to her retirement.
200 free? It looks like the door is wide open and the only challenge is Katie Ledecky. But it looks that this distance is a little bit too much for Penny by far.
There is some concern that if she doesn’t specialize and does all of this stuff she will go nowhere. So far… Read more »

Lol she’s 16 years old, not to mention an international nobody until Canadian trials. Give it time. Ledecky comparatively had a worse Olympics in London and look at her now. Oleksiak in Tokyo could be incredibly dangerous.

@canadianshark: I’m glad to make you smiling and laughing on the New Year’s Eve 🙂
I agree that there are only two young bright stars in women swimming that we can expect to show much more outstanding results than they have already achieved: Katie Ledecky – 19yo and Penny Oleksiak – 16 yo.
But please, be more accurate with data. Ledecky was 15 in London. One year at this age is a huge difference. At 16 she had four world titles and two world records.
Also the success at young age is no guarantee of further progress. Missy Franklin was greater than Penny in 2012 Olympics at age of 17 (more medals, more golds and outstanding world… Read more »