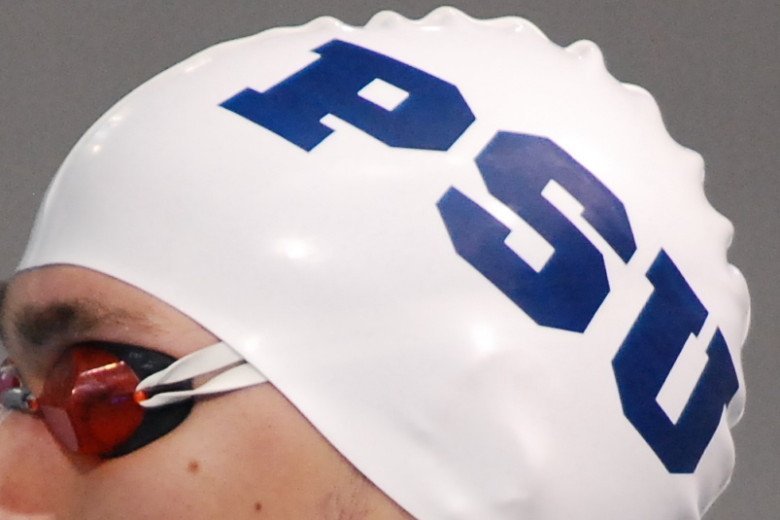 The Penn State Nittany Lions hit the road to face West Virginia Thursday night, coming out with a pair of wins by almost identical scores. Stock photo via Janna Schulze/SwimSwam.com

After demolishing the 400 IM 17-18 NAG record in October, what can Carson Foster do tonight in a match-up with older brother Jake?

The Penn State Nittany Lions hit the road to face West Virginia Thursday night, coming out with a pair of wins by almost identical scores. The men won 145-98 on a pair of distance wins from Matt Stasiunas, while the women took the “W” 144-99, keying on a 1-2 -3-4 finish in the 400 free relay.

Sophomore Matt Stasiunas led the way for Penn State, sweeping the distance races. He got the first individual win at 9:30.77 in the 1000 free, then doubled his total with a 4:35.31 in the 500. Both times gave him wins by over 8 seconds.

West Virginia countered with double wins from Nate Carr. The sophomore was just a few seconds off a pool record in the 400 IM, going 3:59.48. He also won the 200 breast to close out the individual portion of the meet, going 2:04.94 to run away with the win.

Savoy and Young bookended the winning 200 medley relay, with Savoy’s 22.73 being especially impressive. That staked his team to a big lead, and PSU went 1:33.39 to win by just .08 over West Virginia. The final relay wasn’t nearly as close, with Young leading off in 45.98 and Savoys going 44.95 to help Penn State win in 3:02.07, a margin of almost four seconds over West Virginia.

Penn State showed off its depth to win this one, as each team won 5 individual races in all. But Penn State dominated the relays to cruise to the 144-99 win.

The last winner for Penn State was Carolyn Fittin, who picked up the 100 fly title in a quick 55.98, and also swam on two winning relays.

Mountaineer diver Haily Vande Poel got two wins of her own, sweeping diving with 293.92 on 1-meter and 264.30 on the higher springboard.

Sprinter Jaimee Gillmore was the only woman under 24 seconds in the 50 free, going 23.84 to win. She beat out a whole host of Nittany Lions for that title. WVU’s other win came from Jenelle Zee in the 100 breast. Zee went 1:04.53.

And for the second weekend in a row, no Shane Ryan for PSU.

Hmm. Academic issues again? Would be a shame if he misses another Champs season. Dude needs more big meets.

Maybe just move to SwimMAC and focus on swimming (don’t want to get slaughtered for this, but sometimes people just aren’t built for school)? From a TeamUSA standpoint, I would hate to see his progress into the Uber Elite slowed because he’s missing time to catch up in class.

Probably academic although who knows… From a swimming standpoint some would have to agree with you Hulk, he could be a major player on the national team if he keeps competing, but if he doesn’t what’s the point of staying in school? Can always come back to get degree later, USA needs him now

Wondering where Shane Ryan is?? Is he injured??