Peaty Produces In-Season Sub-59, While Ikee Fires Off Another 1:56 2fr 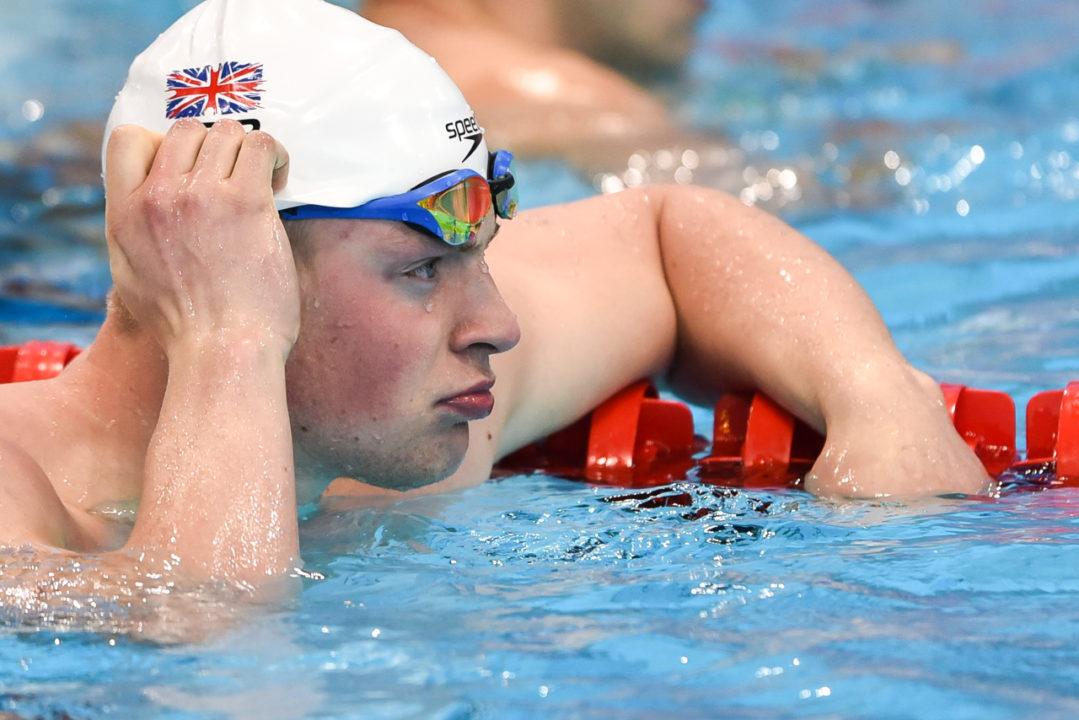 The in-season cross-continental battle between host Japan and visiting foreign talent from both Britain and Australian kicked off in Tokyo today with relatively quiet results. As expected in light of athletes in the midst of their pre-World Championships grind, several stars were well off their season bests, but there were a few head-turning swims nevertheless on day 1 at Tatsumi International Swimming Center.

The as-yet untouchable British world record holder Adam Peaty did his thing yet again in style, clocking the only sub-59 second 100m breaststroke outing of the evening. After touching in a time of 59.64 to Chinese swimmer Yan Zibei‘s 59.29 in this morning’s prelims, Peaty fired off a big 58.82 to win the event by over half of a second. Zibei finished in a very respectable 59.57, while 200m breaststroke world record holder Ippei Watanabe was the top Japanese finisher in 59.80 for bronze. The fact that a just-off-a-Thailand-training-camp Peaty can still manage to produce a time that beat Zibei’s 58.92 winning effort from Chinese Nationals is a testament to that man’s undeniable talent.

Australia’s young World Junior record holder Minna Atherton was the other visiting athlete to take the top prize on day 1, as the 17-year-old notched the women’s 100m backstroke win. Atherton was the only competitor to venture into sub-minute territory, stopping the clock in a time of 59.67 to check-in within the world’s top 10 times thus far this season. At the Aussie National Championships in April, Atherton finished in a subdued 6th with a time of 1:00.53 and out of Aussie World Championships roster contention in the event, relatively disappointing for a teen who has been in the 59-point range over a dozen times.

Finishing behind Atherton tonight was Scottish national record holder Kathleen Dawson of the University of Stirling. Dawson produced the silver medal-winning time of 1:00.22 to match the 6th fastest time of her budding career.

Teen phenom and promising Tokyo 2020 hero Rikako Ikee continued her speed escapade that has characterized her career over the past 2 years with another head-turning performance. Having clocked the women’s 200m freestyle Japanese national record of 1:56.33 just this past January competing at the Kosuke Kitajima Cup, the 16-year-old pint-sized powerhouse cranked out an effort tonight within .58 of that mark, touching in 1:56.91 for the win.

Against such stalwarts as Italy’s Federica Pellegrini and Sweden’s Sarah Sjostrom, Ikee’s time from January still holds the #5 position with the world rankings. The fact that the teen blasted the 2nd fastest time of her young career tonight and fell within striking distance of that January effort to boot is a sign of potential damage to be done come the World Championships in July. Ikee managed to qualify for 5 individual events for Budapest after becoming the first Japanese female ever to win 5 titles at a single Japanese Swimming Championships and has said publicly she’s looking to take down Canada’s sprint queen Penny Oleksiak.

The men’s 200m freestyle event took an unexpected turn of events with the top guns of Kosuke Hagino and Brit Duncan Scott finishing out of gold medal position. Hagino took things out quietly this morning in prelims, earning the 2nd seed behind teammate Daiya Seto with a modest 1:48.13. Seto’s top seeded time of 1:47.76 actually notched the Olympic medalist a personal best, indicative of the rarity in which the 22-year-old dabbles in the event. Scott, on the other hand, finished out of the A-final completely, notching a morning swim of 1:49.82 for 11th place.

Come tonight’s finals, it was Japan’s Naito Ehara who ultimately got the 200m freestyle job done, collecting a time of 1:47.04 to take gold. Hagino surpassed Seto with a time of 1:47.10 for silver, while Seto settled for bronze in 1:47.76. Scott won the B-final in a time of 1:48.37, but all the studs, not surprisingly, looked comparatively sluggish in this in-season contest.

Not competing in that 200m freestyle event was the reigning world champion James Guy of Britain, who instead chose to focus on the 200m butterfly event on day 1. A relatively newer race for the 21-year-old Guy’s been slowly making his way into the upper echelons of the 2fly club, clocking a personal best of 1:55.91 from his nation’s World Championship trials.

Tonight, Guy landed on the podium in 3rd place, matching that PB of 1:55.91. He was within a second of silver place finisher Yuuya Yajima who touched in 1:55.35, but it was the Olympic silver medalist Masato Sakai who proved he is on his own level, producing the only sub-1:55 mark of the night. Sakai holds the top time in the world with the 1:53.71  time he earned just last month and tonight he touched in 1:54.78 to comfortably notch the win.

With Japan’s 200m butterfly Olympic bronze medalist Natsumi Hoshi having retired post-Rio, the nation is looking for the next woman to fill her shoes. Enter Suzuka Hasegawa, who won the event tonight easily in a time of 2:08.10, a mark which checks-in as the 3rd fastest of Hasegawa’s career. Just 17 years of age, Hasegawa scored a personal best time of 2:07.33 at last summer’s Olympics, finishing just out of the final in 9th place.  We’ll look for Hasegawa to continue her 200m fly trajectory now with Tokyo 2020 looming in the background about 1100 days away.

59.67 is a good signal that Atherton is surpassing an uneasy period.

Four Japanese swimmers in the 1.47 range, but the 800 free relay won’t be swimming at Worlds. And also on the women’s side good results (Igarashi 1.57.10 behind Ikee and other two 1.58) but will be a no show in Budapest (really harsh the Japanese selection criteria).

Yes the usual Peaty, but pretty impressive also watching Yan Zibei in the 59.3-59.5 range a month after the Chinese Champs, when he dipped under 59″. The Chinese medley relay seems a real factor, even more serious if Ning Zetao will be in the team.

Ippei Watanabe 59.8 beat his time from Japanese nationals. Excited to see his 200

Imogen Clark only a 1:12.35 for 43th in the 100 breaststroke. Kanako Watanabe, SMH, and Ulyett no shows. Interseting