Ottesen Comes Up Short In 100 Fly Worlds Bid, But Still Has Stocklhom 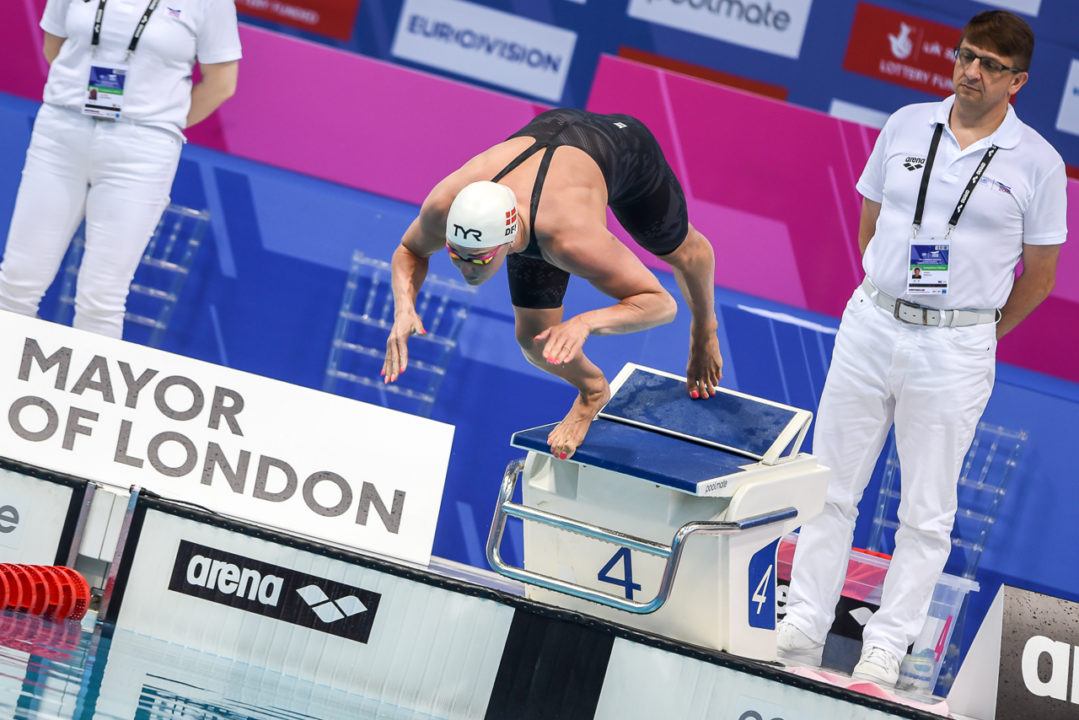 Jeanette Ottesen put up a speedy effort of 58.98 for 100m fly silver tonight behind winner Emilie Beckmann, but both women will need to try again to hit the World Championships qualifying time. Archive photo via Peter Sukenik/www.petersukenik.com

The morning session saw fireworks in the form of Tobias Bjerg‘s monster personal best and new Danish National Record mark of 59.17. That knocked more than 2 seconds off of Bjerg’s former lifetime best, making him the first Dane ever to dip under the minute threshold in the event. You can read more about his record-setting swim here.

Tonight, Bjerg was slightly slower, but still managed to fire off the 2nd fastest time ever performed by a Danish swimmer. He clocked a time of 59.46 to easily dip under the minute threshold once again, as well as clear the 59.95 qualifying standard needed to make the World Championships roster for Gwangju.

The other man to qualify for Worlds tonight was 24-year-old Anton Ipsen, who clinched the 800m freestyle win in a new Danish National Record of 7:49.64. That overtook the previous NR mark of 7:51.24 from the supersuited era, punched by Mads Glaesner back at the 2009 World Championships. You can read more about Ipsen’s historic swim here.

Signe Bro hit a qualifying mark in the women’s 100m free on night 1, but wasn’t able to remake the magic in tonight’s 200m free event. She hit a new personal best tonight, surpassing her former career-fastest mark of 1:59.08 from 2 years ago, but her winning mark of 1:58.73 fell painstakingly shy of the 1:58.66 QT for Gwangju.

Bro, along with all other swimmers, will have another shot at the Stockholm Open that kicks off on April 12th.

Alexander Gliese completed his backstroke trifecta by grabbing gold in the men’s 200m back tonight. His winning mark of 1:59.58 actually established a new Danish National Record, beating his own NR of 2:00.49 he knocked down this morning. However, even a PB couldn’t help him power past the 1:58.34 QT tonight. But, he does become the first-ever Dane under 2:00 in the 200m back, so that may be fuel to spur on a faster swim to qualify next weekend.

New mama Jeanette Ottesen put up a valiant effort in the women’s 100m fly, falling just .09 shy of gold with a nice 58.98, a very respectable effort given the fact she’s only just returned to international racing.

Topping the podium was teammate Emnilie Beckmann who touched in 58.90, while Amalie Mikkelsen rounded out the top 3 in 59.96. The women needed a 58.48 in order to take a roster spot for this summer’s World Championships.