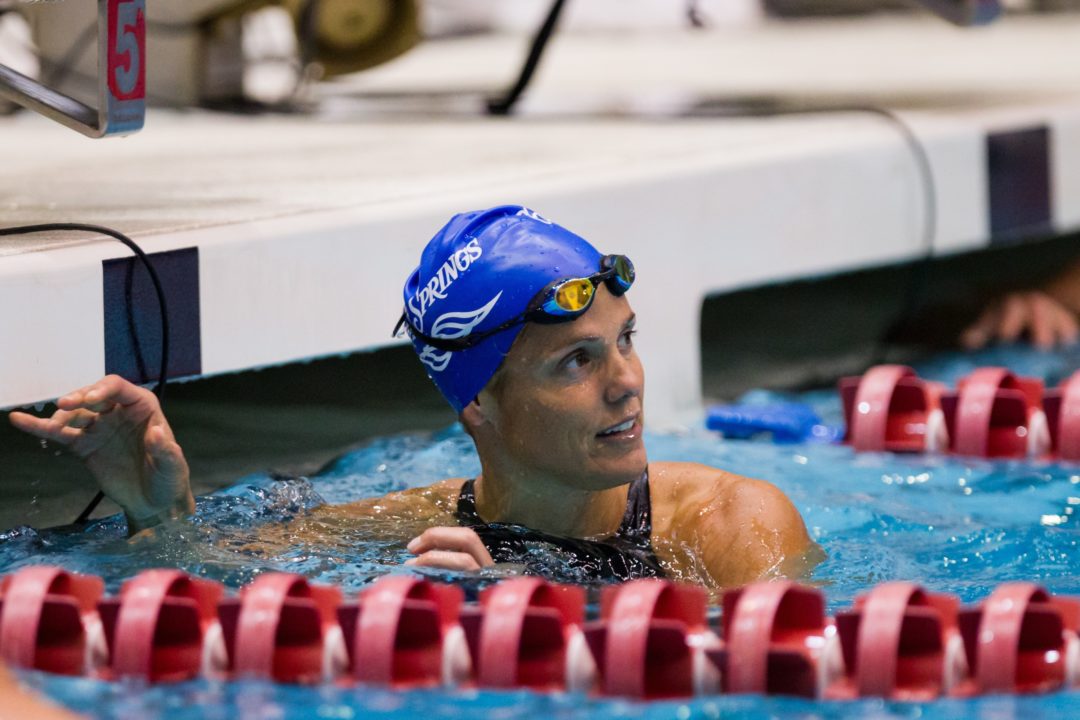 Torres pushed boundaries for gender and age, forging new paths for women. However, underneath the success was a mounting pressure to look a certain way Current photo via Tim Binning/TheSwimPictures.com

we discuss the likelihood that Caeleb Dressel’s NCAA records get broken,whereabouts failure suspensions, and ‘Rowdy’s Rule’ for getting back into swim shape.

Each athlete gives perspective on what they took away from their experience and what they would tell others that are still going through college recruitment.

SEC Network will debut its latest SEC Storied documentary “Once Upon a Comeback,” the story of swimming sensation Dara Torres, on Monday, Feb. 22 at 9 p.m. ET. The film’s debut coincides with the SEC Men’s and Women’s Swimming and Diving Championships, with the women’s airing Sunday, Feb. 21 at 8 p.m. and the men’s airing Saturday, Feb. 27 at 11 a.m.

Dara Torres pushed boundaries for both her gender and age, breaking records and forging new paths for women. However, underneath the success was a relentless mounting pressure to look a certain way. A star swimmer at the University of Florida, Torres won nine SEC individual championships, was named SEC Athlete of the Year in 1988 and earned 28 All-American swimming honors – the maximum possible during a college career – all while living with a severe eating disorder. Bulimic during her time at Florida, Torres speaks about this experience on-camera for the first time in-depth. Her journey is not uncommon, just rarely talked about, and highlights the dangers of competing at the highest levels and pushing the limits, both physically and psychologically.

Torres would go on to win 12 Olympic medals over a 25-year span, participating in five Olympic Games. As a veteran swimmer and mother, her 2008 Olympic comeback is legendary, when at age 41, she became the oldest swimmer to win an Olympic medal. Now, she is an important role model for all collegiate and Olympic athletes, having navigated the difficult transition from elite athlete to a successful life after sport.

The film was directed by filmmaking duo Lisa Lax and Nancy Stern Winters.

“We began our careers in sports television, Nancy at ABC Sports and me at NBC Sports, and followed Dara’s amazing journey through many National & World Swimming Championships and five Olympic games,” said Lax. “We are in awe of her accomplishments, especially in 2008 when she made her third Olympic comeback as a ‘working mom.’ She is a remarkable inspiration to all of us working moms. Being able to handle the pressure and juggle the responsibilities – and to do it all with such poise and perfection is fairytale-like.”

About SEC Storied
ESPN Films launched the SEC Storied documentary series in September 2011, presenting fans the opportunity to explore the rich athletic history of the Southeastern Conference. From extraordinary athletes and coaches to defining games and moments, the series has featured films that focus on the SEC’s recent and more distant past, including one of the most-viewed documentaries in ESPN history, The Book of Manning. In 2015, SEC Storied received its first two Sports Emmy nominations for both “Outstanding Sports Documentary” and “Outstanding Music Composition/Direction/Lyrics” with the film It’s Time: The Story of Brad Gaines and Chucky Mullins.

About SEC Network
The Southeastern Conference and ESPN launched SEC Network on August 14, 2014. The network televises hundreds of games across the SEC’s 21 sports annually. Programming includes in-depth analysis and storytelling in studio shows such as SEC Nation, Thinking Out Loud and Rally Cap, daily news and information with SEC Now, original content such as TrueSouth, SEC Storied and SEC Inside, and more. Hundreds of additional live events are available for streaming exclusively on SEC Network’s digital companion, SEC Network+, via the ESPN App and SECNetwork.com. The network is also available in more than 135 countries throughout Europe, Middle East, Africa and Asia via ESPN Player, ESPN’s sports streaming service in the region.

I really really enjoyed the documentary and I hope Dara will continue telling her story to young women in the swimming world across the country at both the club and college level. I think there is a need for swimmers to hear this because eating disorders are not a thing of the past in this sport.

There was one part of the film where I was taken aback and frankly, disappointed. When Dara brought up the fact that she beat Jenny Thompson, even though they tied for bronze at the 2000 Olympics in the 100 free, I thought that was very petty and not in the spirit of good will. The hard feelings and bad relations happened over 20… Read more »

This subject matter was probably one of the most difficult and perplexing that I ever encountered as a swimming coach . Dara is one of our most colorful and gifted athletes in the swimming world over the past three decades and it is great that she can highlight this for others dealing with the same issue . Whether you like her or not , she is an athlete with incredible staying power and resilience. She also showed me her softer side when at 2016 Omaha Trials , she saw a younger swimmer in her heat having goggle or suit problems and made the referee / starter stop the action so the kid could
fix the problem and continue to… Read more »

She did the same in Beijing. In either the prelims or semis of the 50, Therese Alshammar’s suit ripped behind the blocks right before the start and Dara made the refs wait until she could change suits.

Kudos for Dara for telling this story. We need to talk about eating disorders in the sport.

Crazy how many Olympians (including myself) suffered and still suffer with mental illnesses, guess glory comes at a high price.

Life is complicated. That much is for sure. I love how Dara owns her issues. That being said, one aspect of the podcast really bothered me. Both Mel and Dara go out of their way to say it isn’t Randy Reese’s fault at all. Gushing how great a guy he is. And I am sure to a large degree he was. However, part of the story is about his athletes starving themselves on Sunday / Monday when the weigh ins were predictable. And the punishment for not making weight caused them to be fearful of eating. Randy can be a great guy but also be at fault for this.

We tend to mythologize coaches and the best swimmers. If… Read more »

Agree. There are plenty of legendary coaches out there who have no clue how to address body weight and body issues with female swimmers. The 1980s and 1990s were rampant with weigh ins and “punishments” for not “looking like you should.” Eating disorders DO NOT end when your swimming career does. They follow you and are always there- decades later. Like alcoholism.Yes, these are very successful coaches but I really hope that there is more awareness today. Walking around in a suit that hides nothing can be very anxiety provoking. Weight is a very secondary factor in assessing performance or lack of. I swam faster heavier but was praised when I was too thin and always hungry. I am now… Read more »

I arrived in college so thin that I had stopped menstruating (for the first and only time in my life), and the first thing my coach told me was to lose another 8 lb. We had two girls on our team advised by medical personnel to quit because of their eating disorders, and others in therapy for years over eating issues. I pretty much stopped eating one year and swam like ass because I was so run down. I made the weight that year though. Hooray.

Looking “good” but swimming poorly is no way to live. It’s too hard of a sport to last doing that. You just don’t want your own kids and your swimmers going down that road.

I am so sorry for the two of you and the others this affected. (I am male and we really didn’t get the same treatment.) Swimming and training hard is part of the ritual but I am positive you were healthy and at your best without having to watch what you ate.

Dara has always been almost a mystical figure I our sport. She is a fabulous story of how we can remain flexible and healthy beyond our chronological years. A favorite as a television interviewer, one of my all time favorite athletes in any sport and truly an amazing person, not without her demons which make her more human. Dara if you are reading this please know that you still inspire many thousands of men, women and children. Your story of life continues – more to do. Godspeed to you and you family!!!

The longer I live some things never change…Dara loves her some attention.

Yeah. I was being a smartass about Dara, but I should have considered the sensitive subject of the documentary before posting. I wish I could take that comment back…

I’m surprised the SwimSwam censors let the comment through.

Unfortunately seems to be par for the course with you.

Regardless of the subject matter, what was the point of the comment?

“I realized as soon as I took my seat on that plane to Cancun that it was a mistake.”

Can’t think of many people that carve more attention than you.