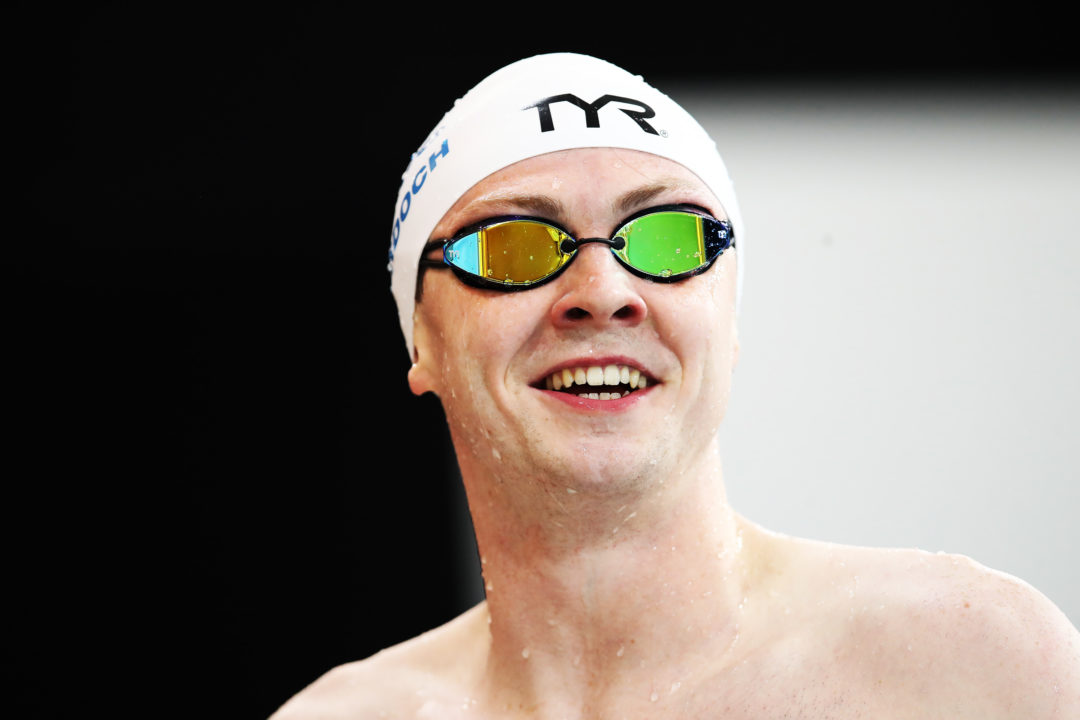 Scotland's Ross Murdoch didn't come away with the gold tonight in the men's 200m breast, but the former Commonwealth Games champion celebrated as if he had. Archive photo via Ian MacNicol for Scottish Swimming

Scotland’s Ross Murdoch didn’t come away with the gold tonight in the men’s 200m breast, but the 28-year-old former Commonwealth Games champion celebrated as if he had.

Capturing the 2breast bronze this evening in Birmingham behind reigning Olympic champion Zac Stubblety-Cook (2:08.01) of Australia and Englishman James Wilby (2:08.59), Murdoch clocked a time of 2:10.41 to stand on the podium once again 8 years after taking the gold in the same event.

The fact the University of Stirling athlete was even competing here, let alone medaling, is a triumph, considering Murdoch had retired in December of last year.

Reflecting on his initial decision to hang up his goggles, Murdoch said recently, “I was just really bummed out and ready for a break. I just needed to stop without the intention of coming back because I felt like it was my time and I had other priorities that were more important. (The National Scot)

“And I got probably four weeks down the line and said to myself, ‘I think I kind of miss it’ but not that much that I wanted to seriously think about it.

“Then probably a month later I was feeling it and after ten weeks I was like ‘oh god I’m in one of the worst spots of my life here’.

Deciding, with the help of his coach Steven Tigg, to give it another go with sights set on the Commonwealth Games, Murdoch nearly immediately looked differently at the sport which had consumed his life for so long.

“Swimming that first session [back from retirement] on my own, I was swimming a 600m Backstroke with paddles which is notoriously an awful thing to do.

“And there was a solitary tear of happiness in my goggles that it was the best and I knew then I had made the right decision to come back.”

And one could absorb Murdoch’s newfound enthusiasm simply by looking at their television screens this evening after the finish of the men’s 200m breast. Having secured the bronze, Murdoch launched himself onto the lane lines in celebration, enthusiastic about his gut-led decision to not quite give up yet paying off.

Murdoch still has the individual men’s 50m and 100m breaststroke events on his agenda here at the 2022 Commonwealth Games.

A really golden moment!!! Beautiful to see the Australian and the Englishman loving the Scotsman’s celebration. So joyful.