Olympic Trials Day Five Scratch Report: Lochte Out of the 200 Back 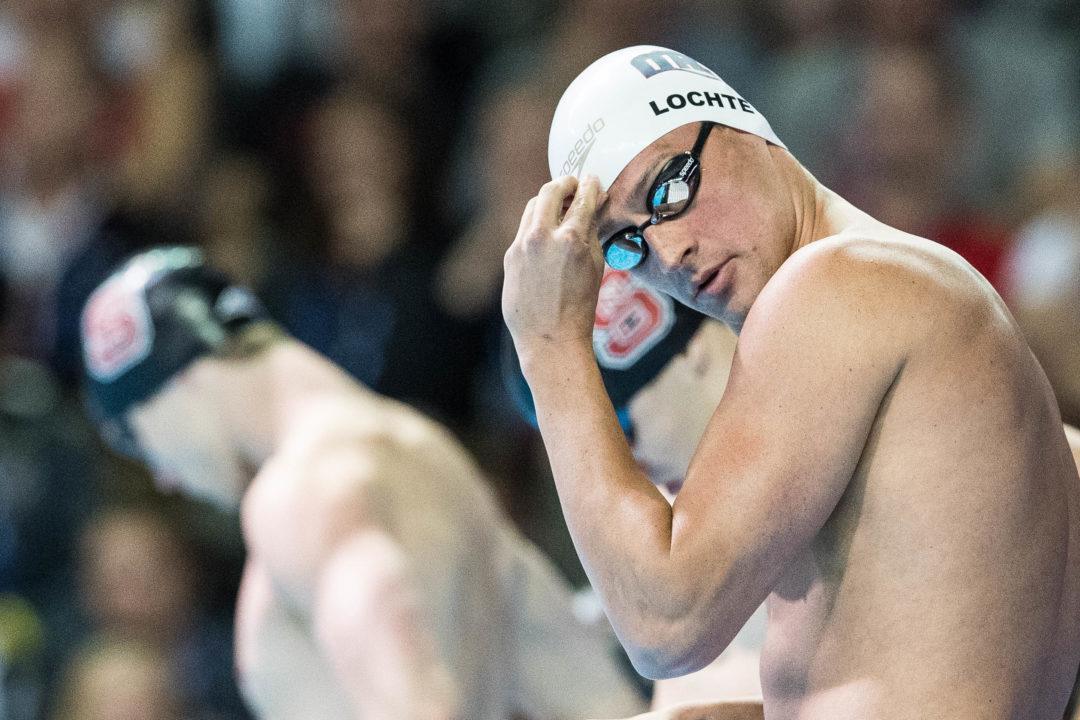 Ryan Lochte of SwimMAC, who has already made the U.S. Olympic team in the 200 free, has scratched out of the men’s 200 back this morning. He was the fourth seed. Instead, he will be putting his focus on the 200 IM, where he is seeded fourth with 1:55.81.

His 800 free relay teammate Jack Conger is also sitting the event out, after coming in seeded 13th with 1:58.54.

Third seed 2016 U.S. Olympic team member in the 400 free and the 200 free Conor Dwyer has dropped the 200 IM, where he was seeded third. Fourth seed Josh Prenot, who has the finals of the men’s 200 breast tonight, is out as well.

Walk in the park (literally) for lochte now to qualify without prenot and Dwyer.

Yeah he and Phelps should go 1-2. But its sad that Lochte gonna swim only in 1 event individual in Rio.

Yeah, and only 1 relay as well! He’s back to his 2004 Olympic event schedule, actually.

Don’t know if this is a joke or you’re just mistaken. Lochte will only be on the 4×200 free relay

It’s a joke. In the other article, the writer mentioned a 200 freestyle relay.

Ryan swam a top-6 100 free in Wednesday morning prelims. So he may be also on the 4 x 100 free relay in Rio, at least for the prelims (non-finals) relay. Prelims relay swimmers get medals, too. So Ryan could still end up with 3 medals in Rio.

Sad but beautiful, too. We can say aloud, ‘He’s almost 32’, but we forget, or at least ignore, that he’s almost 32. Timewise so far, only Plummer seems to have found a way to beat the BIG clock of the grizzled guard. How he can do a pb now is just beyond. Can anyone say ‘Weissmuller’s scy 48.5 in his late thirties’? Go get ’em, Ryan.

Don’t count out phelps yet. Wait until he’s fully rested in rio.

A 100% fit/healthy Lochte would have no competition except Phelps, but since he’s not 100%, it must help his confidence to know that Dwyer (who was 4th in this event in Kazan) and Prenot (whose breaststroke is on fire) have dropped the event. I guess his top competitor for the 2nd spot will be Kalisz, but this seems a bit short for him. Nolan is swimming best times in Omaha, I’m sure he’s going to be digging deep to pull out a special time.

Wow, thought Lochte might be in a bit of trouble in the 200IM but not anymore. (Still thought he would make it but it wasn’t quite the lock for me that I thought it would be before the meet.) Prenot really is putting all his eggs in one basket but think it might work out. Still think he could have made the 400IM, or at least been in the mix.

I don’t think he can count his chickens in the 200 IM yet. If he goes, say, low 1:57, that’s in shouting distance for Licon and maybe even Nolan or Kalisz if they swim out of their minds. I say 1:57 because Lochte was only 1:55.8 at WCs and his 200 free in Omaha was more than a second slower than his time in Kazan. And what do you think a 4:11 IM’er should do in the 200? Not to mention he has the groin issue.

Well well well..
This works out well for everyone… well.. almost
Lochte can focus on his 200 IM battle in Rio against Phelps and Hagino.
Lochte has given a slight chance to his teammate Clary to qualify in 200 back (although Murphy and Pebley will take the tickets thank you very much).

But why is Amy Bilquist scratching 100 free? Has she given up on qualifying? injured?

I think Clary could cancel Pebley out.

Really hope Prenot makes the team in the 2 breast considering his swim in the 1 breast earlier this week. Does anyone know why Bilquist dropped the 1 free? Her 3rd place in the 1 back was great — just wondering why she would scratch the 100.

Is Connor Green swimming? Scratching IM makes sense, but 2 back is weird.

Wish Amy Bilquist didn’t scratch 100 free. Her backstroke has improved tremendously and I am curious to see where her freestyle’s at.