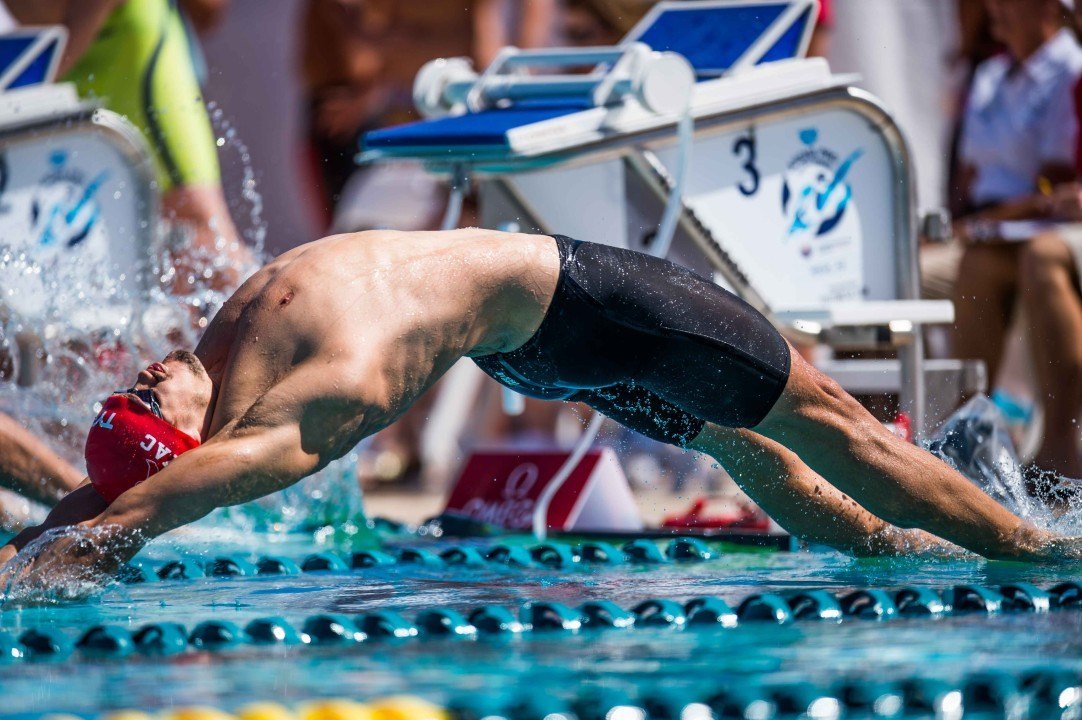 2008 Olympic bronze medalist Arkady Vyatchanin has formally retired from competitive swimming.  The 34 year-old had a long and somewhat nomadic career that highlighted some of the issues that pro swimmers still face, especially when it comes to international competition.

A native of Russia, Vyatchanin earned a silver medal in the 100 backstroke at the 2003 World Championships in Barcelona, and also earned medals at at the 2003, 2005, and 2007 World Championships as part of Russia’s 4×100 medley relay team.  He then earned bronze medals in both backstroke events at the 2008 Olympics in Beijing, as USA swimmers swept gold and silver medals in both events.

In the years that followed, Vyatchanin clashed with the Russian swimming federation over his decision to live and train in the United States under Gregg Troy, and what he calls “irreconcilable contradictions with the Federation’s officials.” Around 2013, Vyatchanin decided to try to swim for Serbia.  However, he encountered difficulties switching his sporting citizenship to Serbia as he was still training in the United States, representing the New York Athletic Club.

“Of all the things I could say or have said in the past the main line stays the same – I believe that sport can be doping and politics free,” Vyatchanin said upon retirement.

During his time in the United States, Vyatchanin became a fixture on the Pro Swim Series (formerly Grand Prix) circuit, and he won both backstroke events at the 2016 U.S. Open.   Vyatchanin eventually became a U.S. citizen last summer, and his times from the U.S. Open put him on the USA National Team, but he has now retired before ever getting a chance to represent the United States in international competition.

“I’m very excited for my future,” Vyatchanin concluded. “I definitely would like to share my knowledge and experience throughout the swimming community. I would like to thank Gregg Troy, his staff, NYAC and others who helped me stay on this level in sport in the last 6 and a half years.”

This guy was tough. To be honest I thought he was going to retire a long time ago. But he stuck with it year after year and never let up and man do I respect the hell out of this guy. Awesome career!

And how cool is this:
“He then earned bronze medals in both backstroke events at the 2008 Olympics in Beijing, as USA swimmers swept gold and silver medals in both events.

Man, this guy was my favorite backstroker after Krayzelburg. His stroke was so powerful, and him not wearing a cap in the Olympic finals seemed so awesome to me. Such a shame he had to deal with so much political turmoil. Spasibo Arkady!!

It wasn’t political but money . Russian Federation put their money behind Rylov & there was none left for Arkady . Russia did not object to him swimming for Serbia but he was blocked by FINA .

I have enjoyed watching him compete and wish him nothing but the best. He is a class act. Its a shame he couldn’t resolve his sports nationality and missed out on the chance to possibly compete in the 2016 Olympics.

A Great guy and a great determined talented swimmer .Always loved his mentality during the trials he went through with his Federation . U will be missed Arkady !!

If he ever writes a book about his journey I’ll be the first to buy it up. always admired his determination and love for the sport even in the face of politics and trying his best to follow his moral compass. I truly hope he stays in the sport as an ambassador or board member somewhere. we can all learn a lot from this guy.

NYAC is proud of Arkady! Very classy guy with ethics, personality and heart. Great things are expected when you wear the Winged Foot — and Arkady has made us all at NYAC and the sport of swimming proud! Three cheers for Arkady!

Nothing but class, congrats on a great career!