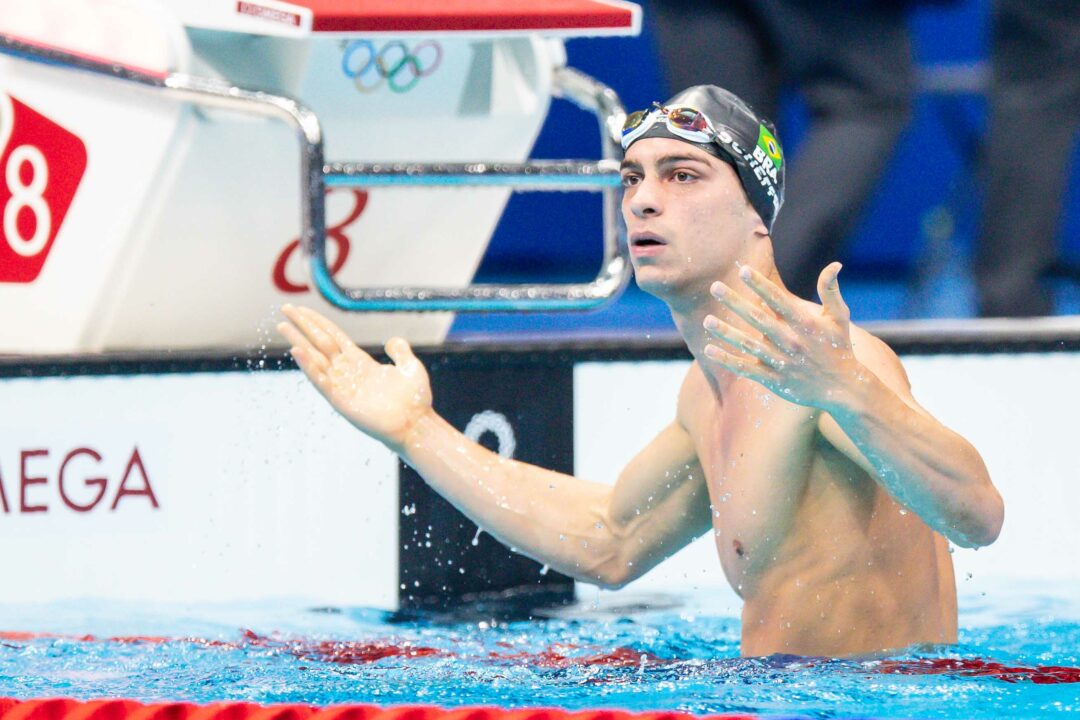 The best swimmers of Brazil will soon be descending upon Maria Lenk Water Park, vying for spots on their nation's World Championships roster. Archive photo via Jack Spitser/Spitser Photography

All told, over 360 athletes representing 48 clubs are expected to be in attendance with 23 of the 27 2020 Olympians making the trek. Among them include Fernando Scheffer, Ana Marcela Cunha, Leonardo de Deus and Guilherme Costa.

The qualification process for the 2022 World Championships is fairly straightforward, with the top 2 swimmers needing to meet or dip under the FINA ‘A’ time standards.

Plus, Olympians Bruno Fratus, Scheffer, De Deus and Costa have all been pre-qualified in specific events based on their performances at the 2020 Olympic Games. Fratus is pre-selected in the 50m free, Scheffer in the 200m free, De Deus in the 200m fly and Costa in the 800m free.

Now 42 years of age, Santos had a stellar end to 2021, winning the SC Worlds title in the 50 fly. With the performance, Santos broke his own record for the oldest swimmer to win a world title. Additionally, the medal made Santos the 2nd-most decorated Brazilian World Champs medalist, behind only Cesar Cielo.

Scheffer broke through big-time with a bronze medal in the men’s 200 free at the Tokyo 2020 Olympics. His time of 1:44.66 marked new Brazilian and South American Records in the event. His journey to the Olympic podium was a dramatic one, as he qualified 2nd in prelims, but narrowly made it out of semifinals, finishing 8th and earning himself an outside lane for the final. His 200 free Bronze marked Brazil’s first Olympic medal in the event since 1996.

Although Costa didn’t win any medals in Tokyo, the 23-year-old broke a pair of South American Records at the Olympics. Firstly, Costa swam prelims of the men’s 400 free, clocking a 3:45.99 for new Brazilian and SA Records. The swim placed 11th, meaning Costa just missed out on advancing to finals. It was a different story in the 800, where Costa blasted a new personal best, Brazilian, and South American Record of 7:46.08, placing 5th and advancing to finals. He would finish 8th in the final, but the prelims performance was one for the record books nonetheless.

On the women’s side, we’ll also be looking for top performers Julia Sebastien, Daynara Puala, Larissa Oliveira and Stephanie Balduccini

17-year-old Balduccini has been making major waves nearly every time she swims. The University of Michigan commit became the youngest Brazilian swimmer to compete at the Olympics in 41 years when she swam at the Tokyo 2020 Games on the women’s 4×100 free relay. Balduccini split 54.06 on the anchor, the fastest split of the 12th-place Brazilian quartet.

In November of 2021, Balduccini won a pair of individual gold medals at the inaugural Junior Pan American Games, helping Brazil win the overall medal table. She notched PBs in both events, winning the 50 free in 25.47 and the 100 free in 54.63. In December, she lowered her PB in the 100 free to 54.53 at the Brazilian Junior Summer Championships, the Julio de Lamare Trophy. There, she won 7 of her 9 events.

Of note, we reported how sprint dynamo Etiene Medeiros is out of this competition due to rehabbing an injury.