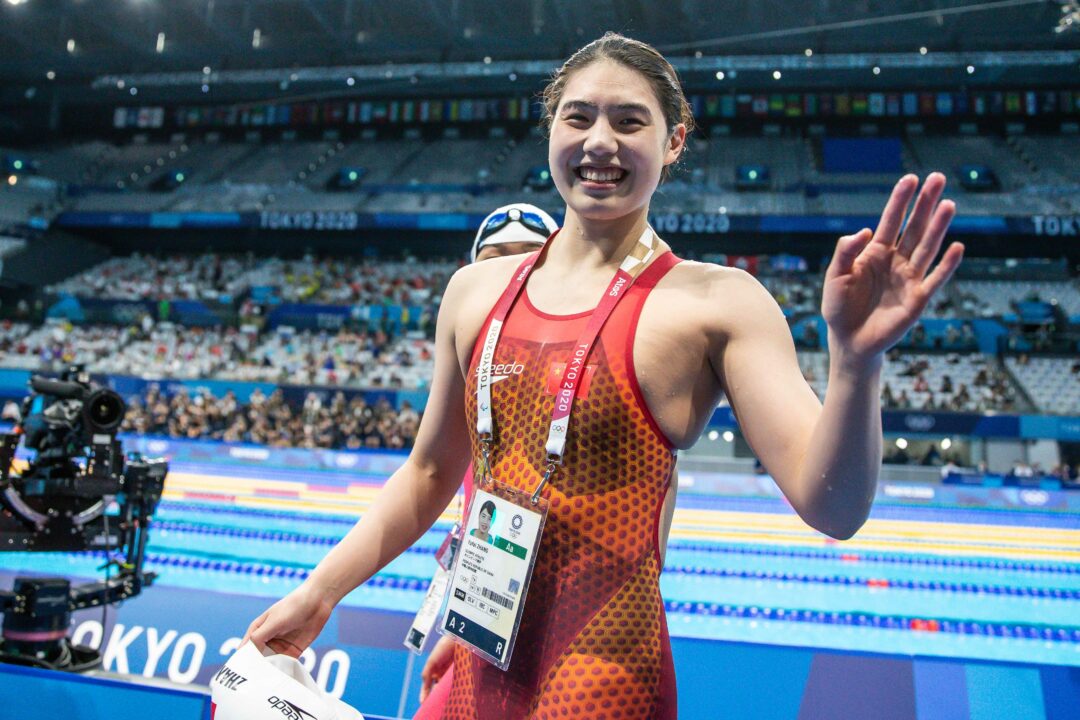 China's butterfly ace Zhang Yufei put on a show once again here at these 2021 National Games, this time tearing down the pool in the 200m distance. Archive photo via Jack Spitser/Spitser Photography

Posting a super quick time of 2:05.84, Zhang beat the field by well over a second en route to capturing another gold. She opened this race in 59.32 and closed in 1:06.52 to seal the deal in a time that would have just missed the podium at this summer’s Olympic Games.

There in Tokyo, Zhang grabbed gold in a new Olympic Record-setting swim of 2:03.86. As fast as that swim was, she’s still a ways away from the elusive World Record, a mark of 2:01.81 Liu Zige put on the books in the supersuit era.

Also in the water tonight was Wu Qingfeng, trying the women’s 100m freestyle semi-final on for size. Touching the wall in a time of 53.99, Wu looks to climb atop the podium in tomorrow night’s final, with today’s performance nearly matching her time of 53.87 prdouced in the heats of this 100m free in Tokyo. After a swim-off with American Erika Brown, Wu missed out on moving on to the semi-final.

Her swim at the Olympics basically felt like a World record. Not sure she has 2 more seconds in her, but I could see her having a Ledeckian effect in that she dominates so much she eventually pulls the field forward

That is a very good time. I assume from the name that this is a fairly big meet so she is at least partly tapered?

Yes in China these are huge games, they span across all sports as well and are once every 4 years (almost sounds like an event but can’t quite put my finger on it)!

Would absolutely be worth tapering for this