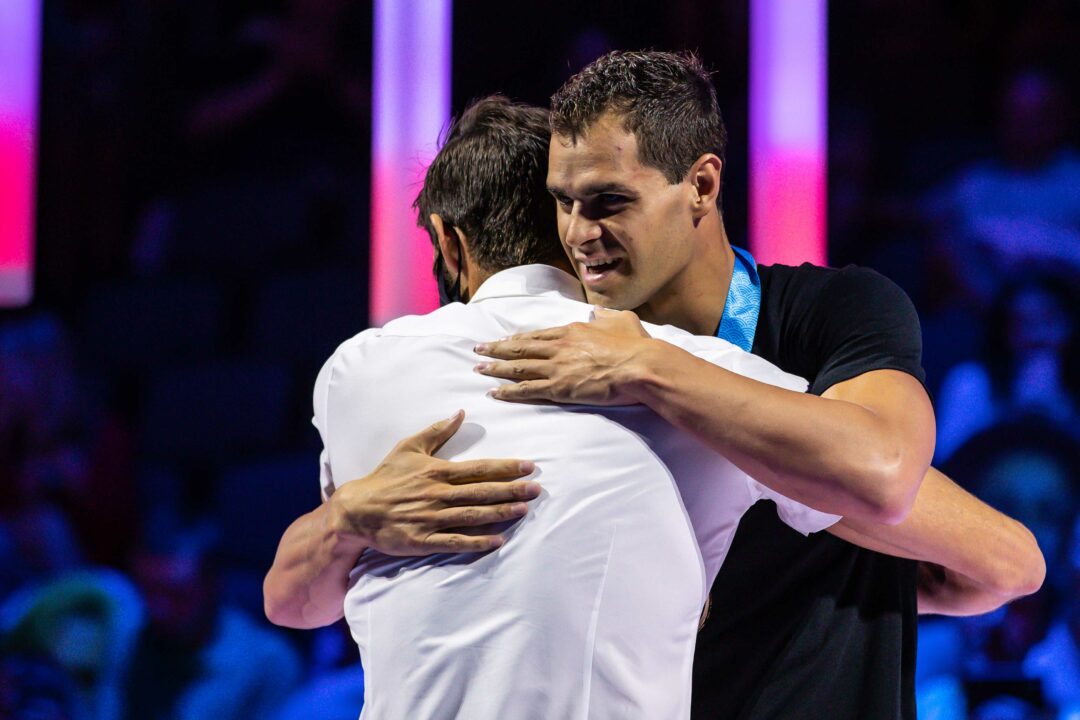 The Men's 200 IM at U.S. 2021 Trials was one of the fascinating races to watch. How does Michael Andrew compare to the GOAT Michael Phelps? Current photo via Jack Spitser/Spitser Photography

The TritonWear EAB is an exclusive group of leaders in swimming that will assist in driving the evolution of the sport in becoming truly data-driven.

Caeleb Dressel Winner Takes It All: What Lies in the 100 FL Tokyo Race Data?

The Men’s 200 IM at the US 2021 Trials was arguably one of the fascinating races to watch. GOAT Michael Phelps himself was at a loss of words after Andrew’s ground-breaking 23.77 FLY split with him later commenting that the last leg of Michael Andrews 200 IM ”shows training error”. Is Phelps right, or will Andrew’s all-out all-the-time race strategy stand the test and claim the throne as the best athlete in the 200IM 2021 Olympics?

We have pinned the two winners of the US Olympic Trials 2016 and 2021 against each other to find out. The 200 IM is an event with great history and some unforgettable battles between Michael Phelps and world record holder Ryan Lochte.

Undoubtedly when they are on the blocks, these guys are ready to swim fast, but we are about to look at their metrics and uncover how they are doing it. To do this, we used our TritonWear metrics to analyze these races and broke them down by phase (transitions, overwater, underwater) the same way it is done in the TritonWear app. Here is the epic showdown:

Andrew started the race with a Dive Block Time (a.k.a reaction time) of 0.68, slightly faster than Phelps 0.70. Unfortunately, the faster reaction time did not translate to a better dive time or distance gained from the start. On the other hand, despite Phelps being slightly slower on the reaction time, he still clocked the highest Dive Hang Time of 0.42 (stayed longer during flight and covered more distance) and Dive Time of 1.12 building his speed and distance advantage heading into the water. Both his Hang Time and Dive Time are the best among all the finalists from both Trials.

Andrew Time UW is nearly the lowest in the field, but his speed is the fastest by far while Phelps stays midrange on both.

Despite his great speed underwater, Andrew forfeits his advantage by surfacing too early.

Andrew set out in a ground-breaking 23.77 for his FLY split 1.12 seconds faster than the world record split but perhaps went a little too much on his legs to go that fast. We are definitely seeing a tradeoff in Andrew’s Backstroke Underwater Time ( 2.64) due to his Fly Overwater Speed. For the same comparison, Phelps split a 25.05 for his Fly with an Underwater Time in Backstroke of 4.82.

Andrew outperformed on Breaststroke Distance Per Cycle of 2.55 by pairing it with a strong Stroke Rate and securing a fantastic 32.29. Phelps, on the other hand, dominated in Freestyle by increasing his Stroke Rate to finish strong.

How TritonWear Can Help You Swim Faster

Even though these athletes are elite athletes at the highest level, we were able to analyze their data and uncover insights for faster swimming, and we can do the same for your training.  TritonWear is a sleek wearable device and app that helps you train well consistently, so you can swim faster. It captures and relays 30+ data points in real-time to any mobile device on deck. Triton Score analyzes your data and provides you with actionable insights highlighting exactly where you’re excelling and what you need to improve on to swim faster.

Learn more about the science behind analyzing your data for you by clicking here.

I reckon the final will be closer than that. Seto’s PB splits are 1.5 seconds slower at 150, and Scott is 2.7 (But can clock 27s even without the potential draft if he’s in the next lane to Andrew)

Scott will be demoralized by the size of that lead.

So would Jason Lesak (though in a different event obviously)

1
-2
Reply
dresselgoat
Reply to  Sam B

This is incredibly true. But! There are some out there who will swim better seeing someone so far out there they think they can catch.

“Despite his great speed underwater, Andrew forfeits his advantage by surfacing too early.” Any further and he’d go past the 15 meter mark. Who analyzed this? Obviously someone who doesn’t watch MA swim.

Maybe on the start, but definitely not on the back or free. MA barely makes it past the flags UW on his freestyle leg. The analysis seems to be an aggregate of all time spent underwater, not just off of the start.

But part of why he’s fast underwater is because he spends so little time underwater. The average is skewed by the push-off, which is much faster than even the fastest underwater kick.

Sure. That could certainly play a role in the data. However, I think this analysis serves as a way for him to focus on things that he can improve to get even faster. Every swimmer, elite or not, should be looking for things that they can improve. His UWs certainly are not perfect. If he works on longer, faster UWs, particularly on the freestyle leg, it would mean less swimming on the last 50 which would help him with the issue of locking up and shortening his stroke on the last 20 meters or so. He has the potential to be the greatest Men’s 200 IMer in history and analysis like this can be very helpful in setting up training… Read more »

I agree with the idea that MA can trade over-water freestyle (his weakest stroke in anything over a 50, IMO) for underwater kick (a relative strength of his) but it comes at the cost of oxygen, which I’m not sure he can afford to pay. His first 150 is crazy fast because he’s mortgaging his final 50 to some extent. I don’t think he can simply stay underwater longer off that last wall unless he changes his strategy. Maybe it’s something he could train to execute better in Tokyo.

Agreed. I think it would be more reasonable to work on a combination of strategy and UW for his 2IM into his training for the next quad plan. I am not sure he has enough time to make any large adjustments prior to Tokyo at this point. Subtle tweaks here and there, sure, but anything significant will require more time to develop.

the most he can hope for at Tokyo is to get under 1:55 which should be enough for the gold

Yes on his start he stays under longer, sort of mid-field length of time. His Breaststroke leg he got back up to midfield timing, due to his strength in that stroke, but back and free he surfaces much faster than the rest of the field in both 2016 and 2021. Check out this graph for the details.

Last edited 6 months ago by TritonWear
5
0
Reply
Something

I’d be much more interested in seeing you compare him to the actual world record holder, true goat, and faster swimmer Ryan lochte.

4
-7
Reply
Bobo Gigi
Reply to  Something

Damn he should have the WR then

Interested, yes – true GOAT see next commenter none other than Bobo Gigi

Kind of a strange “analysis”, would’ve liked to see at least a split comparison or stroke rates by leg.

That being said, I would’ve loved to see a race between these two. I have no doubt that Phelps would’ve cruised by MA in the last 25, but I’m very curious how MAs “fly-and-die” strategy could’ve pushed Phelps on the first half. Makes me think he could’ve put up something even faster than Lochte’s current record.

I mean, he was in the lane next to Lochte when Lochte set the record. It that’s not being pushed, I don’t know what is.

If Andrew was going out like that against prime Phelps then I think Phelps would simply keep close and wreck him on the freestyle.

The crazy thing about Phelps is he was always saving a bit for his next event.

Ask and ye shall receive! Check out this graph for stroke rate by leg of the race!

Thanks for the TritonWear analysis, SwimSwam. Here are some other stats I’d be interested in seeing next time: Underwater distance per kick / kick rate, whether they thank the meet officials, and vaccination status.

While interesting, the author missed an opportunity by comparing Phelps to Andrew in the 200 IM- I get the temptation to do a Michael vs Michael comparison bc it’s catchy. MA has not been shy to state his intentions of going after Lochte’s WR- it would have been a much more interesting comparison to see the 1:54 swim with MA’s. Granted Phelps is one of the greatest 200 IMers of all time but let’s give Lochte some credit as the faster (and thus in my opinion, greatest) 200 IMer of all time given the WR.

Pretty sure we saw the split comparison to Lochte’s swim here before during trials.

The fact is right now MA is nowhere close to breaking the WR. He hasn’t even gone sub 1:55 yet, so a sub 1:54 does not seem to be on the immediate horizon unless he can figure out how to drop another 1.3 seconds in a month. Phelps was unable to go sub 1:54 after being sub 1:55 multiple times throughout his career.