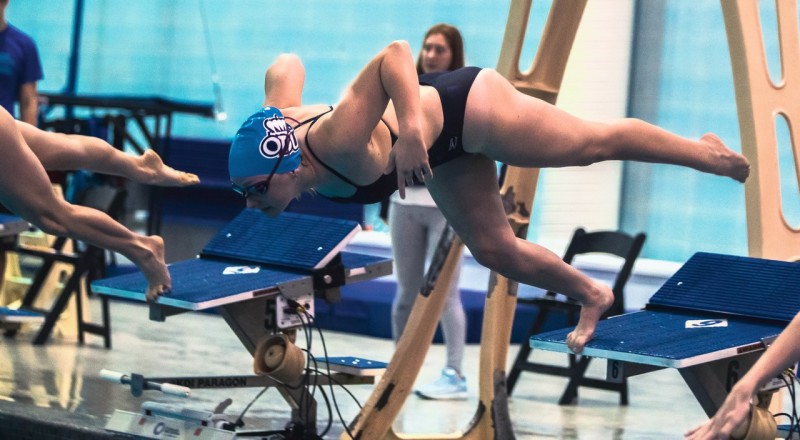 Old Dominion University swimming defeated Davidson on both the men's and women's side. The women won 177-117, while the men won 157.5-136.5. Current photo via Keith Lucas, Old Dominion Athletics

That continued with the first swimming events of the day, as the women’s 200 medley relay team of Jacklyn VandePoel, Rylee Moss, Tara Enneking and Summer Miln triumphed in a time of 1:47.47, while the men’s team of Neal McElhattan, Filip Svedberg, Peter Durisin and Parker Harp won with a time of 1:32.81.

The Monarchs are back in action beginning Nov. 23 at the West Virginia Invitational.

Jacob Cobb win the final individual event of the night with q time of 1:57.15. Nathan Kimbel and Hugo Eriksson finished second and third.

ODU finished the night with a 400 medley relay victory in both the men’s and women’s races.

While the Monarchs posted the team wins, Davidson coach John Young was encouraged by what he saw from the Wildcats.

“We’d prefer the impact on our record be different, but I really felt good about the racing today,” he said. “A number of folks were on the wrong side of touch finishes, but with season-best swims. We’ll always take season-best swims.”

“Siena stayed hot, racing away in the 200 and 500 and staking the freestyle relay to a lead as its opening leg,” said Young. “Sarah Helen again swam well. Julia Goodhead and Abby continue to hold down their races. Abby was solid in her 200 IM debut, following Sarah Helen in a powerful 1-2 finish.”

Daniel Valmassei swept the diving events to lead the Davidson men, posting 307.72 points in the 3-meter competition and 292.65 points in the 1-meter.

“Deep team performances in the 1,000, the 200, and the 100 backstroke set the tone early,” said Young. “And the men did a great job nullifying ODU’s butterflier by taking the scoring spots behind him in both the 100 and 200. Owen’s 200 backstroke was again impressive; he does a remarkable job closing that race.”

Up Next
Multiple Wildcats will compete in the TYR Pro Series event next weekend in Greensboro.