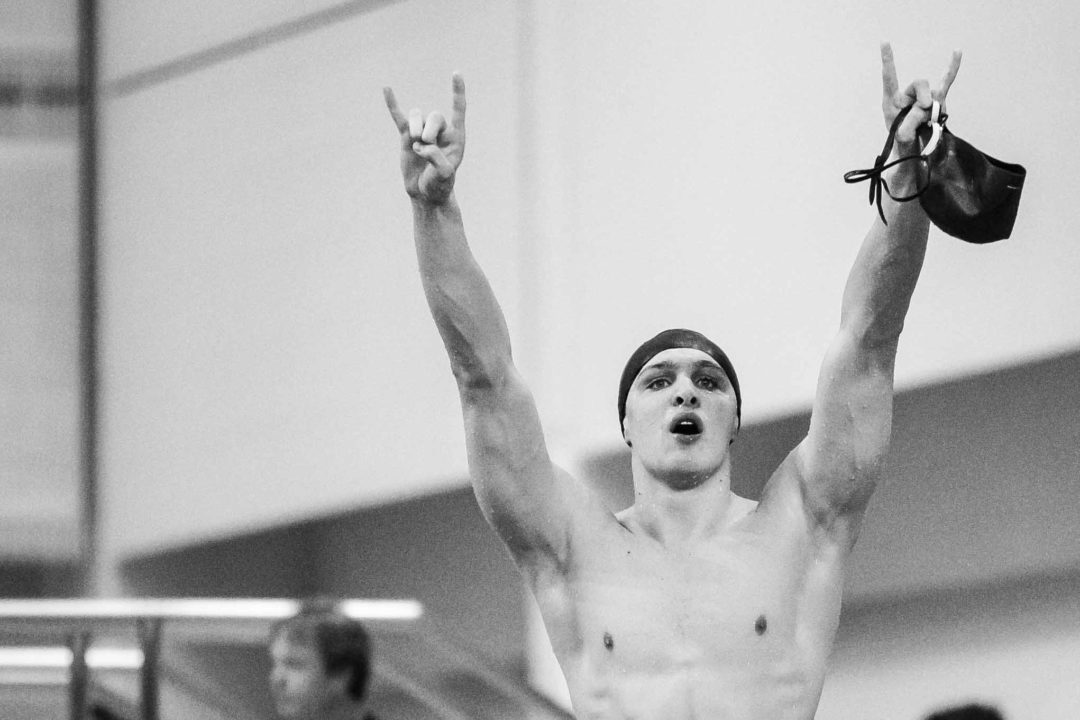 The #2 Texas Longhorns made the 2 hour trip from Austin to College Station to take on the #12 Texas A&M Aggies the day after Halloween. While the Aggies just narrowly missed out on a few victories, ultimately the Longhorns’ depth prevailed, as the Austin-based boys cruised to a 70 point victory over the College Station crew.

The Longhorns were raring from the get-go, sweeping the top four spots in the 1650. Chris Yeager was the early leader, but Jack Collins came back on Yeager and Alex Zettle over the back half of the race, ultimately winning in 14:57.60. Zettle touched 2nd in 14:59.02, and Yeager took 3rd in 15:04.38. While the 1650 isn’t as contested at this point in the year as much the 1000 free is, those are still all top six times so far this season. That should be promising for the Longhorns, whose distance group put up impressive times at the Texas Invite and Big 12s last year, but couldn’t quite put it together at NCAAs. From the race video below, courtesy of Texas A&M Swimming, the entire field was apparently suited up.

The 200 free turned into another Longhorn rout as they snapped up the top three spots, led by Maxime Rooney‘s 1:35.84, the 5th-fastest this season.

After two close races, the Longhorns put some distance between themselves and the Aggies in the 200 fly, with Sam Pomajevich winning in 1:44.88, the4th-fastest mark in the country. Andrew Koustik‘s took 2nd in 1:46.59, and freshman Ethan Harder took 3rd in 1:49.16, giving the Longhorns a podium sweep.

Texas sophomore Daniel Krueger has been fast all season, dating back to his 41.9 100 free at the Texas Orange-White intrasquad, and he popped a 19.72 in the 50 free here to put him at the top of the season rankings in that event. Texas A&M senior Adam Koster wasn’t too far behind, though, touching 2nd with a 19.82 that puts him 4th this season.

After several very close finishes, the Aggies finally got their first win of the day courtesy of Casas, who one again jumped out front early, but this time stayed there, to win the 200 back in 1:43.36. That’s the 2nd-fastest time this season, behind only Mizzou’s Nick Alexander’s 1:43.25.  Harty took 2nd in 1:44.75, also a top ten time this season.

Corbeau then completed the breaststroke sweep with a 1:57.65 victory in the 200, the 3rd-fastest time this season. While Corbeau’s also a very good 50 freestyler, it’s worth nothing that just like in the 100, he actually won this event on the strength of the 2nd half of the race, and he was the only man in the field to split sub-31 over the final lap. To win, Corbeau passed both teammate Jake Foster and the Aggies’ Walker, who finished in 1:58.52 and 1:59.17, respectively.

Corbeau and Foster are both freshmen, and when coupled with the sophomore Scheinfeld, the Longhorns have quickly developed what appears to be on track to one of the more formidable breaststroke groups in the nation. This is particularly striking as this discipline was a marked liability for Texas just two seasons ago.

Texas continued to display its distance freestyle dominance by sweeping the top four spots in the 500 free, led by Drew Kibler‘s 4:26.39.

In the penultimate individual event of the day, the 100 fly, Casas earned the Aggies’ 2nd victory of the session with a 47.34. The Longhorns’ were exhibitioning all of their swimmers by this point, but Jiang touched 2nd in 47.62.

Texas A&M freshman Jace Brown officially won the 200 IM with a 1:52.45, but three Texas swimmers touched before him, with Jake Foster getting his hand on the wall first with a 1:47.32.

Longhorn diving star Jordan Windle swept the 1m (362.77) and the 3m (415.43) diving events, meaning that, ignoring exhibitioned events, the Texas won 14 of the 16 events contested. During the Longhorns’ four year run as NCAA champions, they usually looked pretty beat up in-season, to the point where two years ago, Texas A&M beat them in a dual meet for the first time in 55 years. But last year, Eddie Reese was pretty open about the fact that he was backing off a little in practice, and that seems to be the case once again this year.

COLLEGE STATION, Texas – The No. 2 Texas Men’s Swimming and Diving team defeated No. 7 Texas A&M on Friday night in College Station. The Longhorns took home 12 wins, including both the 1-meter and 3-meter diving contests.

COLLEGE STATION, Texas – The No. 7 Texas A&M Aggies men’s swimming & diving team fell to the No. 2 Texas Longhorns at the Rec Center Natatorium Friday night. Texas came away with the victory, with a final score of 181-111.

Shaine Casas led the way for the Maroon & White and finished in the top three multiple times Friday. Casas placed first in the 200 Backstroke with a time of 1:43.36, as well as the 100 Butterfly, logging a time of 47.34. Benjamin Walker also performed well for the Aggies, earning a second-place finish in the 100 Breaststroke. Adam Koster and Mike Thibert earned top-three finishes in the 50 Free.

In Friday night’s diving events, the Aggies posted another solid performance. Kurtis Mathews led the way for A&M in the 1-Meter dive, posting a score of 361.80 and earning a second-place finish, while Victor Povzner recorded a score of 316.50 and placed third. Matthews also placed third in the 3-Meter dive (387.01).

The Aggies return to action when they travel to the Bay State of Massachusetts on Thursday, November 7th to take on the Boston University Terriers in the first of two meets up north. Follow on Twitter for updates, @aggieswimdive.

Quotes
Men’s Swimming Head Coach Jay Holmes
“The crazy thing about this meet is that we swam pretty well in places. We would beat almost any other team out there; we just didn’t match up with Texas tonight. A lot of it is just getting our legs back under us, and that’s just going to come later in the season for us.”

Head Diving Coach Jay Lerew
“The results weren’t all that bad tonight with our diving. Kurtis [Mathews] had the last event in the bag and the door was wide open. Unfortunately, he missed his dive so we came out losing by a one-point margin. We just have to keep working. We’ve learned our new dives and our more difficult dives, and the team proved that they can execute under pressure today.”

Did Texas suit up?

Only for the mile

Did Texas suit up for this meet?

based on what I saw on ESPN Texas wore briefs

Wonder what Rooney could split on fly leg?