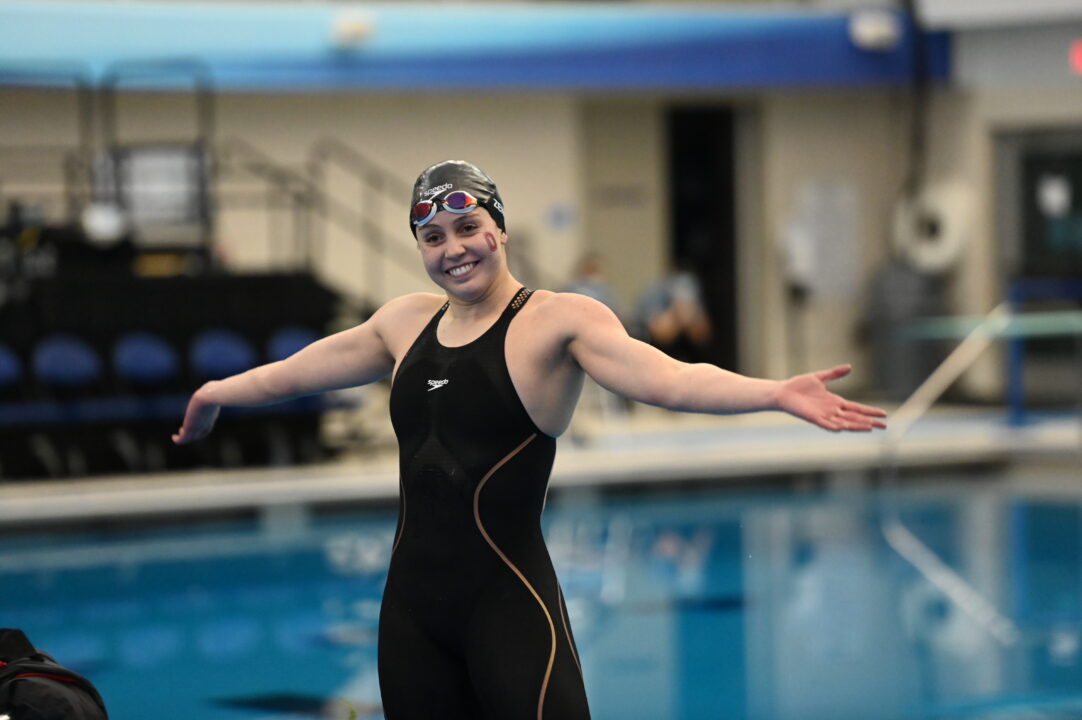 Katherine Zenick had a key butterfly leg of the 200 medley relay splitting a 23.29 helping Ohio State finish just ahead of Michigan. Archive photo via NCAA

Ohio State hosted Michigan for a Big Ten rival meet on Friday, January 28th. This was a showdown on the women’s side as the two teams have battled it out for many of the most recent Big Ten Championships. It also was a small preview for what most likely will be the battle for the conference title coming in about three weeks from now. Both teams were unsuited. The Michigan women had won every dual meet since the 2014-2015 season until this year.

Ohio State also won both relays helping them secure the win. The Buckeye’s 200 medley relay ‘A’ relay won in a time of 1:36.95 compared to Michigan’s 1:37.62. The key leg for Ohio State was butterfly. Katherine Zenick split a 23.29, almost a whole second faster than Olivia Carter swam (24.11).

Freshman Lindsay Flynn also captured a win for the Wolverines as she won the 50 freestyle in a time of 22.73. This was 0.26 faster than she swam two weekends ago at Minnesota. Her season best of 22.12 places her at #15 in the NCAA this season.

This loss is 100% on the coaching staff. Team is ahead after a stacked 100 back and there isn’t a 2nd breaststroker to have a competitive B medley relay or place in the 100 breast event.

Unless you have an odd number of divers available (on your roster/healthy/eligible), and your 5th diver scores more than your 16th swimmer.

There are some tremendous comments here. See ‘em at Big Tens.

What about men’s meet?

Charlie Clark is a beast, look at his splits. Made his move at the 250 and dusted an Olympian… in the 500 AND 1000 🙃
Is Hunter really about to be throwing down (SS vernacular) 45 second 100 backs in dual meets 😂.
Michigan is HURTING for a backstroker… almost as bad as they need a diver.
Michigan only won 3 events, OSU went 1,2 in the majority.
It will be nice, not hearing the Michigan fight song at Big10’s this year 🤗

Question out of curiosity. Do the swimmers who don’t go to conference usually rest for these last dual meets?

Yes, it’s pretty common for swimmers to rest for their last dual meet. Often, those “first chance” meets serve the same function, but this year, seems to be more common in dual meets.

No one prepared for this meet. Looking at times compared to what they typically go in season across the board they’re the same if not a little faster because of adrenaline. Michigan definitely looked like they were hurting though which could be attributed to travel. It’ll be a good showdown at B1G regardless.

I can say for fact that neither team was rested or suited. It was a brawl. A great meet to watch and I’m sure an amazing college sport experience for the kids racing. Someone has to win, and someone has to lose, but rivalries bring out the best you’ve got to give…

A simulated dual between these two teams scores out 175-125 Michigan. The result was 130 points different. You can say all you want, these two teams didn’t approach the meet the same. I count 8 B1G Champ finalists for Michigan including two Olympians who scored 8 pts or less in the dual.

Gal Groumi might win the B1G 200 IM title by over a second. He was third Friday. He won neither Fly, which he’ll be no worse than 2nd at B1Gs in either.

The list is long of similar examples. It’s a dual meet. OSU won at home. It indicates nothing in regards to the end of the year.

kind of off topic but how does qualification work for big 10s and other conferences in general?

No qualifications. Teams can bring x swimmers (18 I think?). This number includes swingers and divers (divers are 1/2 a swimmer). Coaches need to be strategic in who they bring across 2 sports and a multitude of different races.

This is correct for the Big Ten. Travel team of 26, declare your 18 scorers, with divers counting as half, morning of day 1. Divers count as half.

Other conferences have other rules.

SEC, for example, allows a roster of 22. They can be swimmers or divers in any combination – everyone counts as one roster spot.

MAYA GERINGER IS THE 👑👑👑