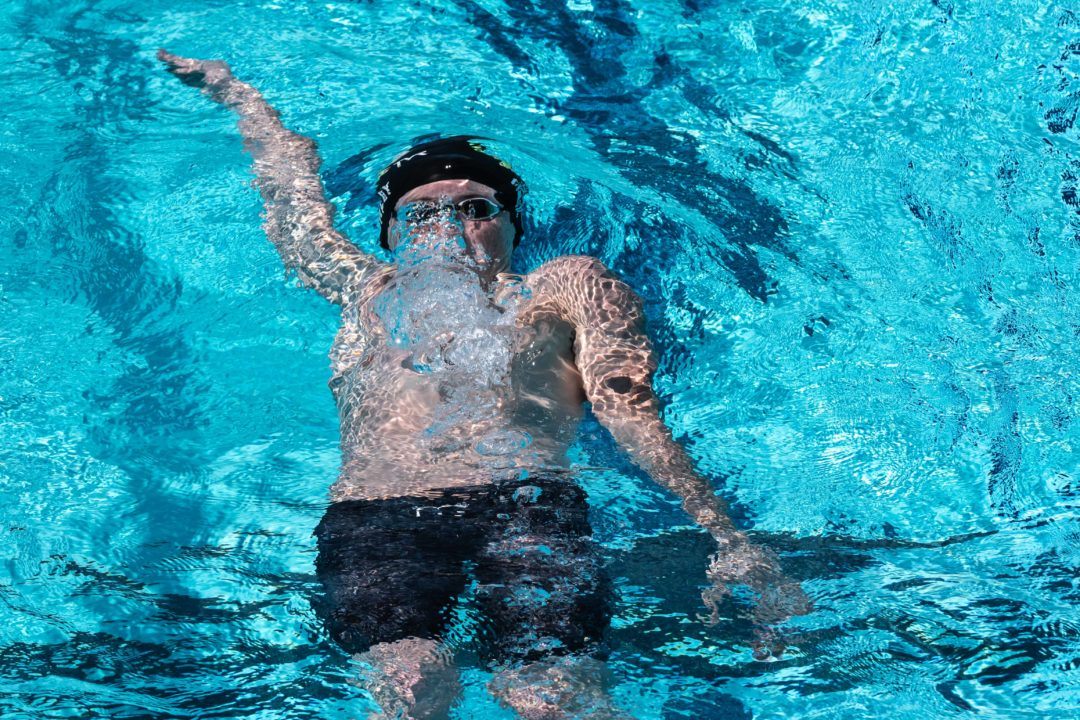 Conley, an Ohio State commit, took a full second off the state mark in 1:47.52, just 2 hundredths shy of his best from 2018 Winter Juniors. Archive photo via Mike Lewis/Ola Vista Photography

The Hawken girls dominated again at the 2020 Ohio Division 2 State Championships, winning their 22nd-straight team title. They won by over 150 points. After finishing 6th in 2019, the Indian Hill boys became the 2020 State Champions, winning a tight team race with just 8 more points than runner-up Hunting Valley, the 2019 champions, and 15 points over 3rd place Hawken.

Holmes and Hamilton Badin’s Luke Paxton had one of the highlight races of the meet in the 200 free. Both put up lifetime bests in prelims, with Holmes leading in 1:38.50 to Paxton’s 1:38.60. That was Paxton’s first swim under 1:40 and a best by 2 seconds, while Holmes dropped nearly a second. In the final, they were again within a tenth of each other. Holmes took a 4-tenth lead on the front half. Paxton closed the gap to flip just a tenth behind going into the final 50 and edged out Holmes at the finish, 1:39.16 to 1:39.25.

Holmes returned to earn his first state title in the 100 fly, setting a lifetime best 48.37 in the final. Paxton also swam that event, but was disqualified in prelims after touching in 49.18. His lifetime best 48.76 would have placed 2nd. Holmes closed out his schedule with a 46.51 lead split on the 400 free relay.

Waynesville’s Owen Conley broke his own D2 State Record to repeat as champion in the 200 IM. He came from behind on the breast leg to move ahead of Hunting Valley’s Nicolas Tekieli. Conley, an Ohio State commit, took a full second off the state mark in 1:47.52, just 2 hundredths shy of his best from 2018 Winter Juniors.

Both swimmers returned for the 100 back, where Tekieli dominated in 48.33, just 4 hundredths away from the D2 State Record. He took a second and a half off his lifetime best. Conley was 3rd there in 50.02 behind Seven Hills’ Tim Kalin, who swam a lifetime best 49.85.

In her 2nd individual event, the 100 back, Eden earned silver in 55.94, just a hundredth off her lifetime best from prelims. Columbus junior Nyah Funderburke, who swam her best time with a 54.35 in prelims, won the final in 54.49. Earlier in the session, Funderburke came within a few tenths of the D2 State Record in the 100 fly. She took the title in a personal best 54.68. She has one more year to chase the record, which is a 54.37 done by Taylor’s Isabelle Murray in 2107.

Beloit West Branch senior Jamyson Robb took down the D2 State Record in prelims of the 100 breast. Robb clipped her best with a 1:01.27 in the heats, taking a tenth off her own former record. She went on to defend her title in 1:01.65. Robb has committed to join the Liberty women next season. They just won their 2nd-straight CCSA title last week.