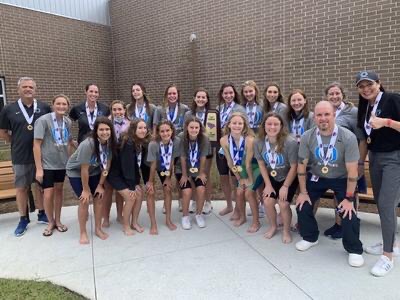 The 3A Division includes the smallest schools by enrollment of the SCHSL’s three swimming divisions. Schools competing in this division are the smallest in the league, under its recent reclassification that was based on enrollment numbers as of mid-2019.

In a tight battle for the State Championship Oceanside Collegiate Academy prevailed. With their victory, Oceanside managed to defend its title from last year.

Oceanside opened up the meet by taking first place in the 200 yard medley relay. The team of Kendal Chunn, Nell Cagle, Grace Isaacs, and Caroline Hill swam to a final time of 1:48.26 to beat the remainder of the field by over 4 seconds.

Towards the end of the meet, Chunn saw her second individual victory, winning the 100 backstroke with a time of 57.17.

Oceanside also saw a victory from Isaacs, who out-touched Christ Church Episcopal School’s defending champion Claire DePiero 24.26 to 24.37 in the 50 freestyle for the win.

DePiero also managed to win several races. In her first event, the 100 freestyle, she hit the wall in a time of 52.71 to claim the victory by almost .5. Later, she teamed up with Christ Church teammates Mollie Folk, Karinne Everly, and Kylie Larkin to defeat Oceanside in the 200 freestyle relay. The foursome managed to swim a time of 1:39.24, beating Oceanside by over 3 seconds.

In the final event of the meet, the 400 freestyle relay, Oceanside solidified its team victory, coming in first overall. The team of Hill, Isaacs, Chunn, and Claire Natale touched in a final time of 3:34.29. With her contributions to the relay, Chunn became the only swimmer at the meet to win all 4 of their events, scoring a perfect 48 points.

Shouldn’t even been compete’n with the public schools anyway. Public can’t recruit like the private schools. Cheaters trophy

Oceanside Collegiate is a public school.

Dang, for a “small schools division” they sure have a great amount of participation. Why don’t you share some advice with some of the larger schools that have no depth. I think there’s a lot of schools that would appreciate some pointers (for real)

Just a heads up- Oceanside did win, but I don’t believe the scores were updated on meet mobile past the early events.

Thanks for letting us know. We just got the official team scores, and are working on updating now!