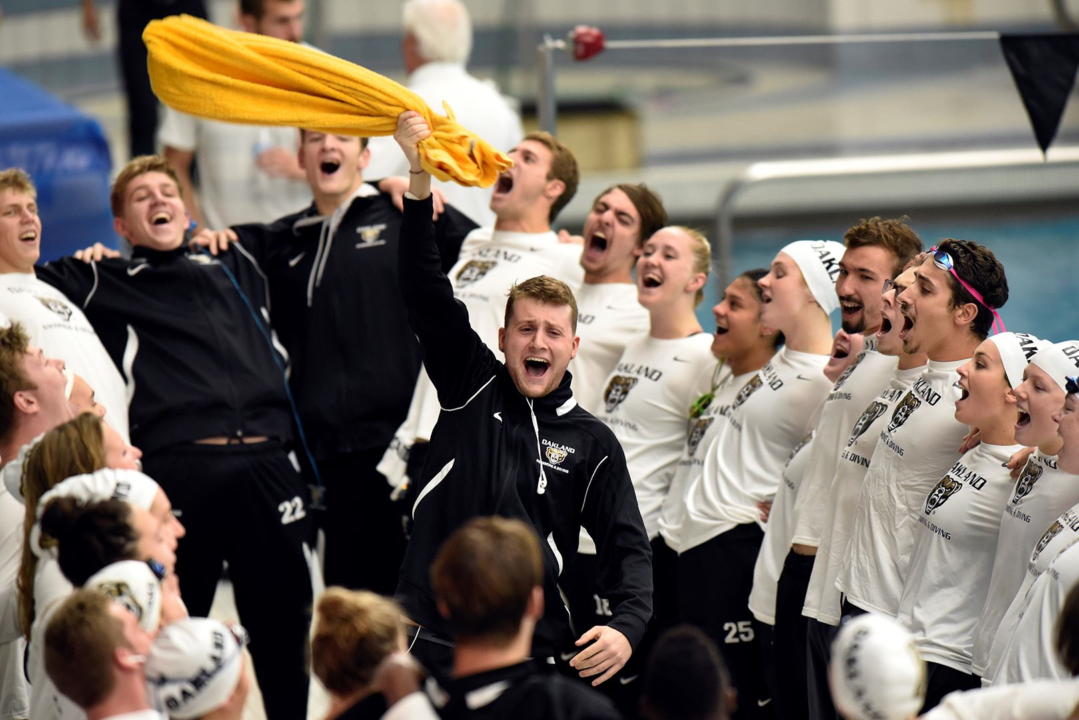 The Oakland men opened the regular season with a win against Milwaukee (209-91), while the women topped Milwaukee (232-68) and Vanderbilt (176-118) Friday. Current photo via Oakland Athletics, Jose Juarez

The Golden Grizzlies earned an impressive 24 combined first place finishes out of 32 events.

Oakland returns to the pool tomorrow, Saturday Oct. 12 as they host the Golden Grizzly Relays and welcome Vanderbilt, Wayne State, Calvin College and Hope College to the Oakland Aquatic Center beginning at 1 p.m.

ROCHESTER, MICH. – The Milwaukee women’s swim & dive team opened the 2019-20 season with a strong showing on the road in a tri-meet against league foe Oakland and Vanderbilt on Friday evening in Rochester, Mich.

Freshman McKenzie Sanchez highlighted the night for the Panthers after taking home the gold on the one-meter in her first collegiate meet ever. Her score of 273.45 also qualified her for NCAA Zones and cracked the Panther top-10 list.

Sanchez also grabbed a second-place finish on the three-meter with a score of 240.98.

“For our first dual and travel meet, things went extremely well,” head coach Kyle Clements said, “on the women’s side, we had a lot of great performances, but McKenzie Sanchez was the overall highlight. In her first collegiate meet, she won the one-meter and qualified for NCAA Zones with that score.”

Fellow freshman Molly Meland also kicked off her collegiate career with four standout performances. The freshman led the Panthers in both her individual events. Meland touched the wall in 58.45 in the 100 back to finish third and swam a time of 57.51 in the 100 fly to take fourth in a tight race. She was also a key member in both top relays for MKE.

Sophomore Giulia Guerra-Montes is back doing what she does best: backstroke. Guerra-Montes came home with a fourth-place finish in the 200 back, clocking in at 2:06.61.

The young Panther relay of Meland, sophomore Andrea Bellart, freshman Hannah Pozezinski, and sophomore Cassandra Hutchins touched the wall first for MKE in the 200 medley relay with a time of 1:47.53, which was good enough for fifth-place.

Meland, Hutchins and teammates freshman Kelen McDaniels and sophomore Bella Passamani led the Panthers in the 400 free relay to a fourth-place finish with a time of 3:38.47.

“Overall, we are very happy with the first performance of the year,” Clements continued, “there is a starting point for everything and that is a great way to start.”

UP NEXT
The Panthers are back in action tomorrow at Grand Valley State in Allendale, Mich. Racing is set to start at 12 p.m.

The Milwaukee men’s swim & dive team opened the 2019-20 season with a strong showing on the road in a dual meet against league foe Oakland. The Panthers won four events on Friday evening in Rochester, Mich.

“For our first dual and travel meet, things went extremely well,” head coach Kyle Clements said, “on the men’s side, the senior men were excited and had great performances.”

The Panther 200 medley relay of freshman Ben Huynh, seniors Jacob Fase and Patrick Kelley, and sophomore John Ruan started the night off right as the relay raced to a second-place finish with a time of 1:34.67. The relay of juniors Tyler Wrasman and Daniel Jablonski, freshman Jacob Weber and senior Bailey Bodart, clocked in just behind (1:37.00) to take fourth.

Bailey Bodart, another member of the senior squad, took home silver in the 100 free, touching the wall in 47.20.

Sophomores Mason Schoof and Jack Garcia each grabbed top finishes in their respective events as well. Schoof took home bronze in the 200 back (1:54.91) while Garcia also finished third in the 1000 free (9:56. 25).

The diving duo of freshman Jared Kleczka and junior Spencer Peronto shined from the boards after going 1-2 on the one-meter. Kleczka won with 268.20 while Peronto grabbed second with 251.85.

Kleczka also finished second on the three-meter with 260.40.

The night was capped off with a second-place 400 medley relay finish. The team of Bodart, Ruan, junior Danny Larson, and Fase clocked in at 3:07.43 to out-touch Oakland by four tenths of a second.

“Overall, we are very happy with the first performance of the year,” Clements continued, “there is a starting point for everything and that is a great way to start.”

UP NEXT
The Panthers are back in action tomorrow at Grand Valley State in Allendale, Mich. Racing is set to start at 12 p.m.

ROCHESTER, Mich. – The Vanderbilt swim team competed in its second meet of the season taking on Oakland and Milwaukee in a tri-meet on Friday at the Oakland Aquatic Center.

Opening their first meet of the weekend, the Dores raced in the 200 medley relay with Vanderbilt A relay – Abby Burke, Lizzy Colwell, Tonner DeBeer and Kaley Buchanen picking up second place (1:43.50).

Collecting her third second place finish of her collegiate debut, freshman Alix Roy dominated in the 1000 free touching the wall at 10:27.33 followed by senior Lara Hernandez-Tome touching in at 10:28.55 to claim third place.

Earning her first collegiate top three finish, freshman Allison Bauer raced to earn second place in the 200 free (1:54.15). Picking up third and fourth place for the Dores, senior Namilla Sanchez touched in at 1:56.09 followed by Taylor Ward touching the wall at 1:57.41.

Sophomore Lizzy Colwell marked her first victory of the season, securing first place in the 100 breast with a time of 1:04.84. Colwell also picked up another top finish by winning the 200 IM touching in at 2:05.59.

Continuing success for the Dores, freshman Kristen Nutter earned her second top finish of the season, placing second in the 200 fly (2:08.49) followed by junior Brooke Ellis touching in at 2:08.80 to mark third place.

In the 50 free, the Commodores secured second through fourth place with sophomore Tonner DeBeer leading the Dores with a time of 23.82 followed by freshman Chantal Jordan touching the wall at 24.50. Placing fourth, Burke finished with a time of 24.53.

Freshman Alina Jones dominated in the 200 breast to pick up her first second place finish as a Commodore. The freshman touched the wall at 2:22.70, earning a season best time in the event.

Claiming her second win of the meet, DeBeer excelled in the 100 fly racing a season best time of 55.59.

Closing out the tri-meet on top, four Dores raced in the 400 free relay marking a time of 3:30.88. With this time, the Commodores secured first place in the final event.

Vanderbilt will be back in action on Saturday by competing in the Grizzly relays hosted by Oakland University at noon CT.