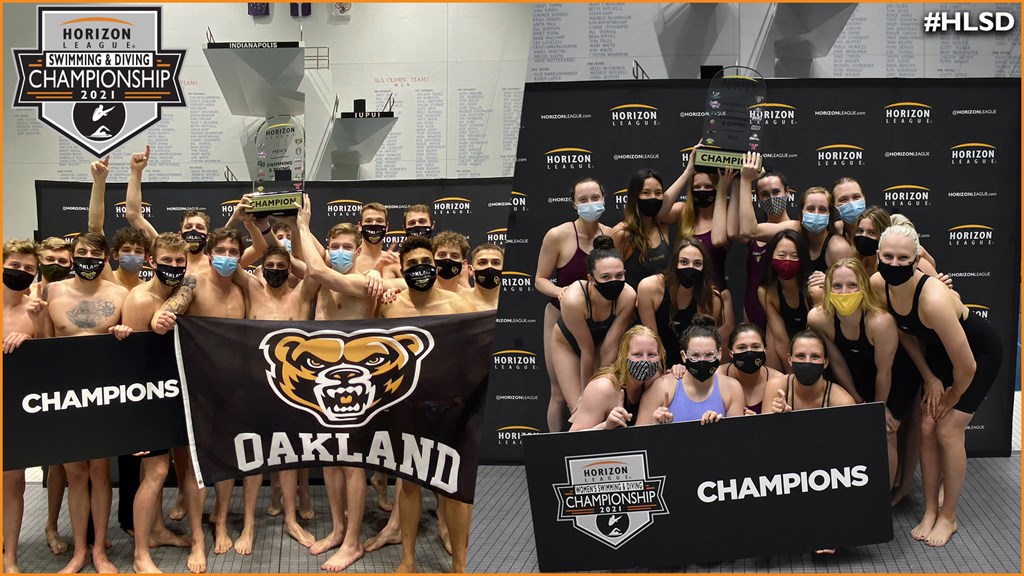 The Oakland Golden Grizzlies got it done yet again, winning their 8th-consecutive Horizon League Men’s & Women’s titles. The Oakland women left little room for doubt heading into tonight’s action, and ultimately scored a record high team points. The previous highest score at the Horizon League Championships was set by Oakland last year, when they scored 927.5 points. The Golden Grizzly men went into the final day with a comfortable lead over Cleveland State, although it wasn’t out of the realm of possibility that Cleveland State could overtake them. Oakland did end up getting the job done, although they were a touch under their score of 858 from last year. Cleveland State made a big improvement over last year, going up 85.5 points over their score of 633 from 2020.

Several swimmers completed their 3-for-3 runs tonight. The first to do so was Oakland sophomore Emily Aycock, who won the women’s 1650 free with a final time of 17:00.45. Aycock also defended her title in the event, in addition to completing her perfect meet, although her time tonight was off her 16:53.37. She had already won both the 200 free and 500 free previously in the meet.

Next up was Oakland junior Ben Davis, who closed out his perfect meet with a win in the men’s 1650 free. Davis was pushed through the entirety of the race by Cleveland State’s Spencer Tussing, but Davis had the closing speed to pull away in the final 50s. Davis clocked a final time of 15:23.71, just ahead of Tussing’s 15:25.19. Like Aycock, Davis had already won the 500 free and 200 free at these championships.

It was in the very next event, the women’s 200 backstroke, where the 3rd 3-win swimmer was made. Susan LaGrand, an Oakland junior who made the B final in the 200 back at this year’s NCAA Championships, won the 200 back title tonight. LaGrand clocked a 1:53.99, half a second off her season and lifetime best, but was still fast enough to establish a new Horizon League Championship Record. She was an absolute force in the event, touching the wall first by over 5 seconds. LaGrand won the 200 IM and 100 back at these championships as well, establishing new Championship Records in both events also.

Green Bay senior Anna Liu was the next swimmer to achieve a 3rd individual title at these championships, capping off her remarkable meet with a hard-fought win in the women’s 100 free. Liu was pushed to the end by Oakland freshman Ronja Riihinen, but was able to hold off a late charge. The 50 free champion from earlier in the meet, Liu was able to get out to a 0.43 second lead over Riihenen. Liu touched in a final time of 49.80, with Riihinen in tow with a 50.01.

Oakland sophomore Christian Bart was the 5th and final 3-event winner of the meet. He took the men’s 100 free tonight, roaring to a 43.38, which was the only time in the field under 44 seconds. With 2 years left of Horizon League competition, Bart is now just 0.44 seconds off the conference championship record in the event. Bart was another swimmer to defend a 2020 title tonight, as he had won the event last year with a 43.76. Bart also won the men’s 50 free and 100 breast at these championships.

Oakland sophomore Marko Khotynetskyi defended his title in the men’s 200 back, and won his 2nd race of the meet. Khotynetskyi pulled away slightly from the field at the end of the race, finishing in 1:43.16, just 0.04 seconds off his own Horizon League Championships Record. Khotynetskyi has been as fast as 1:42.01 in the event this season, which led the conference this year.

Oakland junior Taylor Bailey was in total control of the women’s 200 breast, holding the lead wire-to-wire. Bailey posted a 2:13.58, touching nearly 2 seconds ahead of anyone else in the field. She led a 1-2 charge for Oakland in the event, with freshman Emily Shores taking 2nd with a 2:15.47. The duo sets Oakland up for another high finish in the event next year. Defending champion in the event, Sydney McDowell, an Oakland senior, came in 4th this year with a 2:18.29, well off her winning time of 2:12.77 from last year. McDowell won the 100 breaststroke on Friday.

Oakland senior Tarek Aboelenin took the men’s 200 breast with a 1:58.28. Aboelenin used a superior back half of the race to charge into the finish and get his hands on the wall just 0.11 ahead of runner-up Griffin Manning (Cleveland State), and 0.18 seconds ahead of 3rd-place finisher Jack Krusinski (Cleveland State). Defending champion Maxwell Boehnlein finished 4th this year with a 1:58.55. A Green Bay senior, Boehnlein won the race last year with a 1:58.01. Boehnlein also won the 200 IM earlier in the meet.

Cleveland State freshman Bob Fick took the men’s 200 fly by over a second, clocking a 1:46.39. The swim was just a touch off his prelims performance of 1:46.36. He led the race from start to finish, posting the fastest splits in the field on each of the first 3 50s.

Oakland completed their sweeps of the men’s and women’s relays at these championships, taking both 400 free relays tonight. The Golden Grizzlies women’s 400 free relay was dominant, with Ronja Riihinen, Mia Keranen, Sohvi Nenonen, and Susan LaGrand combining for a 3:21.30. LaGrand touched the wall 5.65 seconds ahead of runners-up UIC. More good news for Oakland: all 4 members of this relay are slated to return next year, putting the Golden Grizzlies in a favorable position for 2022.

The men’s relay was closer, although Oakland was in control of the race from the beginning. Christian Bart, Mack Flowers, Valance Washington, and Marko Khotynetskyi teamed up for a 2:56.63, touching 2.03 seconds ahead of Cleveland State, who finished 2nd. Flowers will not be back next season for Oakland, while all 4 members of the Cleveland State team will return.

The streak of dominance continues for OU and Coach Hovland. Super impressive especially considering the oddities of the meet scheduling.

Congrats to Oakland. But bring back Wright State. Would make it a little more interesting.

If Bart can get some LCM races in he could be a threat in the future in a year or two. Hope he swims some this summer. Dude is like 6’4”