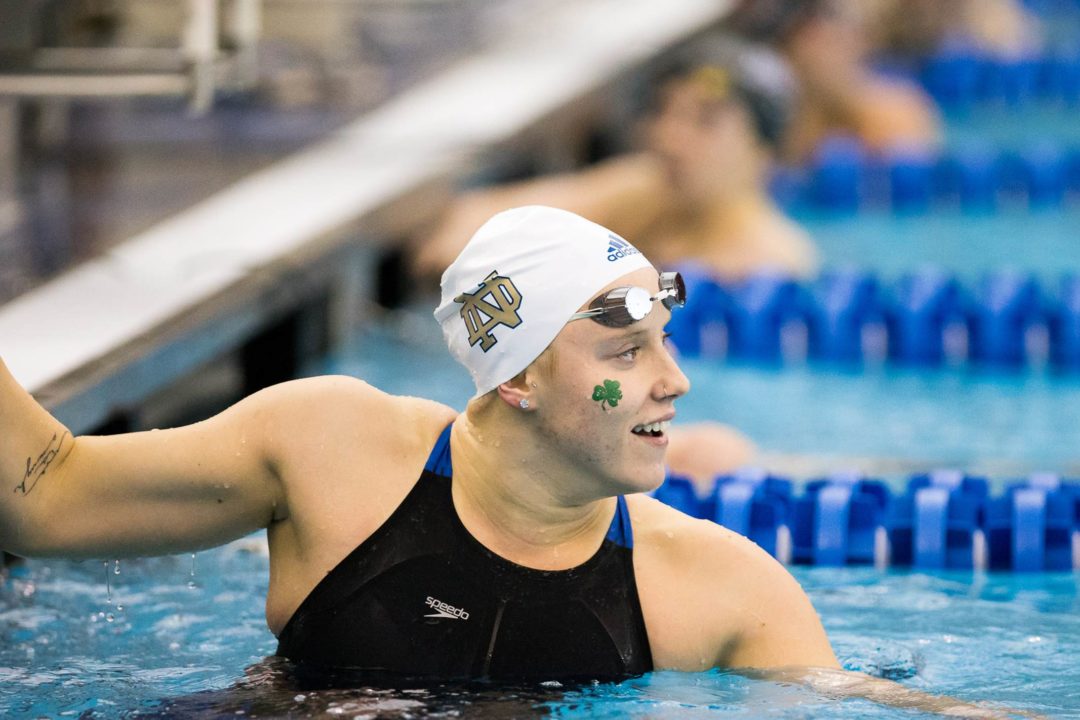 Notre Dame’s American record-holding breaststroker Emma Reaney was the subject of the school’s “Irish Extra,” a lengthy profile released by the school today.

In it, Reaney talks about her experience at the Short Course World Championships, and we get some outside opinions of Reaney’s swimming from Notre Dame interim coach Tim Welsh and former Texas A&M star Cammile Adams.

Here is the full story, courtesy of the University of Notre Dame:

The reigning national champion in the 200-yard breaststroke, Reaney begins her final semester of competition at Notre Dame Saturday.

Flat-wall turns have always been a challenge for University of Notre Dame swimmer Emma Reaney.

“They are a lot different than what we do collegiately,” said Reaney, a senior from Lawrence, Kansas. “You have no way to grab on to anything. You have to just touch and push off really fast.”

Swimming the breaststroke leg for the United States 200 medley-relay team in Doha, Qatar, Dec. 5, at the FINA Short Course World Championships, Reaney zeroed in on her challenging target … and rocked it.

“That was the one turn of the whole meet that was really, really successful for me,” Reaney said.

For the five-time All-American, delivering in the clutch meant Reaney would end up as part of a U.S. record-setting relay. Reaney teamed up with Felecia Lee, Claire Donahue and Natalie Coughlin to win the silver medal and set an American record at 1:44.92. Denmark won the gold medal.

Reaney’s time of 55.79 was the best breaststroke time in the relay.

“I touched and realized that I was first at the wall,” Reaney said. “I didn’t know how fast I had gone until I saw my split way later.

“It was funny. Once you touch, the officials make you swim to the side really fast, so I didn’t get to watch our butterfly because I had to swim under all of the lanes to get out of the pool fast enough to be done getting out by the time they were coming back, because you can’t be in their way.”

Reaney credited her record-setting performance on an international stage to the coaching, push from teammates and resources at Notre Dame.

“I was a decent swimmer before I got here, but Notre Dame has made me what I’ve become in the past three years,” Reaney said. “It’s a combination of the support staff, all of my coaches, the strength coach, the nutritionist … they’re all more supportive than I could have imagined. They come in on their days off … they do whatever they can to make me a better athlete.

“It’s just the environment here, in general, with other athletes. Everybody can’t really wait to watch their peers succeed. It fosters success in that way.”

According to Reaney, she learned the importance of work outside of the pool at Notre Dame.

“I hadn’t lifted weights until I got to college,” Reaney said. “My club and high school experience consisted of me being in the pool. There was no nutrition, there was no dry-land training and there was no mental-health aspect. Notre Dame has a great sports psychologist who helps us out. All of that definitely has a lot to do with my success here.”

“It raises the ceiling,” Welsh said. “What it does for us outside the pool is obvious. It gives Notre Dame credibility because there is an athlete competing at the world level.

“Inside the program, it raises the ceiling of what’s capable in this pool,” Welsh said. “When we go down there every day, and people go back and forth in the pool, people starting thinking, ‘Holy cow. Emma went back and forth in this pool, and now she’s a world-class athlete.’ It also encourages us to be focused on achieving at a higher level than we might have otherwise.

“Outside of the program, we don’t have to say it because the recruits already know what Emma has accomplished,” Welsh said. “If they’re interested in swimming at an elite NCAA level and looking at Notre Dame, they know Emma Reaney exists. We have people come here to watch our meets, and they ask about Emma. They’re here to watch Emma, and they ask us what events she is swimming today.”

Welsh gave a lot of credit for Reaney’s success to Brian Barnes, who coached Reaney for her first three seasons under the Golden Dome, including during her national championship campaign last season.

“No. 1, she has become very strong,” Welsh said. “She’s a very powerful athlete. You can see that in what we call the short-course (a 25-yard race). When she pushes off the wall, she is really good, really good. She’s really strong, she’s really powerful and she accompanies that with a very directed focus on everything that she does.”

Reaney has an outstanding work ethic Welsh believes plays a major role in her success.

“When you watch her train, there are no wasted laps, no wasted strokes,” Welsh said. “She’s focusing on what she does, every single stroke, every single time. She’s also very coachable. When you combine her strength, her focus on doing the best she can possibly do in everything she does and the fact she is coachable, the results are very powerful.”

Texas A&M star Camille Adams, a national champion in the 200-yard butterfly and also a member of the U.S. swim team, said Reaney handled the pressure of international swimming and excelled.

“Emma is really good about focusing on strong details,” Adams said of Reaney’s strengths. “She takes the coaches’ words and emphasizes those particular things every day. She takes swimming seriously, but she doesn’t take it too seriously. That’s what I’ve seen enable people to take their swimming to the next level. They’re able to have fun with it. That’s always worked for me and I see it in her.”

Notre Dame’s level of competition during practice and in competing against some of the nation’s top programs also gave Reaney what she considered an advantage in preparing for international competition.

Reaney also tries to bring energy to practice and competitions and have an appropriate mindset.

“I’ve learned whether it’s a small dual meet or the NCAAs, as long as I’m having fun then I’m going to swim fast,” Reaney said. “I think you need those smaller meets to carry that through into the larger ones.

“Practices aren’t always that much fun, because you’re pretty much in pain for two hours while staring at a black line. But I love swimming meets.”

One of the things Reaney loved about the FINA world championships was swimming on a relay team with one of her idols, U.S. Olympic star Natalie Coughlin.

“To swim on a relay with her and hear her insights was really cool. I learned a lot watching what she did. All of the veterans gave us advice, but the best thing was being observant and watching how they handled situations.”

After Reaney concludes her Notre Dame swim career in 2015, she will swim in the World University Games in South Korea in the summer. Then the goal is the 2016 Summer Olympic Games in Rio de Janeiro, Brazil.

“Emma’s future is wide open,” Welsh said. “She is focused on achieving higher goals at an international level.”

Good Luck E.Reaney. I look forward to watching you race again at the 2115 NCAA’s. I wish there was some underwater footage of the 200 breast stroke from the 2114 NCAA’s. I’d like to see where all that power and speed comes from. Odd that there doesn’t seem to be any of the race footage anywhere.