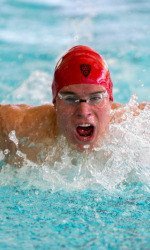 Utah's Bence Kiraly threw down a tri-fecta of wins in the 200y free/500y free and 200y IM to add to the Ute's men's point siege. Current photo via Courtesy of Utah Athletic Department

Tempe, Arizona – In a Pac-12 showdown, the Utah Utes traveled to Mona Plummer Aquatic Center to meet conference rival Arizona State University (ASU) in what would result in a split win.  Going into the meet, the Utah men’s team had a 6-0 overall and 1-0 Pac-12 record and, indeed, that record would remain, as the Utes won rather handily today, defeating the Sun Devil men 174.0 to 119.0.

The opposite transpired on the women’s end, however, as the Utah women are still now win-less in the Pac-12 conference.  Arizona State put the hammer down, winning 191 to 108, which moves ASU’s overall record to 3-5, with a 2-3 record in the Pac-12.

The Sun Devils further declared their dominance by winning the next five individual events as well.  The roll started with sophomore Anna Olasz’s win in the 1000y freestyle, winning in a time of 10:05.03 – a solid seven seconds over the competition.  Sophomore Kat Simonovic immediately followed up with an impressive win the women’s 200y freestyle in a time of 1:50.29, ensued closely behind by teammate Colombian Sophomore Juanita Barreto, who touched the wall in a time of 1:50.66.

ASU’s sophomore Ingibjorg Jonsdottir, from Iceland, earned a commanding win in the 100y backstroke with a time of 54.92, topping the field by over two seconds and earning an NCAA “B” cut.  Her teammate and Pac-12 Swimmer of the Month nominee for December, Jorie Caneta, scored wins in both the breaststroke distances to keep racking up the Sun Devil points.  She claimed both the 100y breaststroke (1:02.51) and the 200y breaststroke (2:15.29) over Utah’s Stina Colleou in both events, although Caneta had more of a battle holding off Colleau in the 200y breaststroke; Colleau finished just .09 behind in 2:15.38. Both women’s 200y times cleared the NCAA “B” standard.

The events in between these two relays saw wins on both the Utah and the Arizona State side, but with nine total event wins, the Utah Utes just put the victory too far out of reach for the Sun Devil men.  The Utes point-racking began with the 1000y freestyle, where freshman Brandon Shreeve claimed the win in 9:25.89 and the siege simply continued with an utterly dominating three-win performance by Hungarian junior Bence Kiraly. Kiraly conquered the field in the men’s 200y freestyle (1:37.60), the 500y freestyle (4:31.36), and the 200y IM (1:50.28) events to earn mega points for the Utes.

Utah sprint standout senior Nick Soedel also claimed multiple wins, as he just clobbered the competition in both of his signature events.  His 50y freestyle time of 19.87 was the only result of the field to dip under the 20-second mark and was enough to earn a “B” cut. It is a tad off of his 19.58, though, that he clocked at the Texas Hall of Fame meet in December.  Soedel’s 100y freestyle time of 43.58 also earned a “B” cut, while licking the field by about two and a half seconds….in a sprint freestyle event!  That time, too, was off his Texas Hall of Fame meet performance of 43.01 rendering Soedel still in the hunt for his “A” cuts in these two events.

Alex Fernandes threw in a win in the 100y butterfly, touching the wall in 48.50 – a time on the slower side for him, as he clocked in the 46-range back in December.

The Arizona Sun Devils did sprinkle in a few strong-performance wins; Brazilian sophomore Thomaz Martins was victorious in the men’s 100y backstroke (51.05), while sophomore Barkley Perry was triumphant in the 200y backstroke (1:48.52).  Junior Thibaut Capitaine got his job done by winning both the 100y and 200y breaststroke events in 56.13 and 2:03.57, respectively.