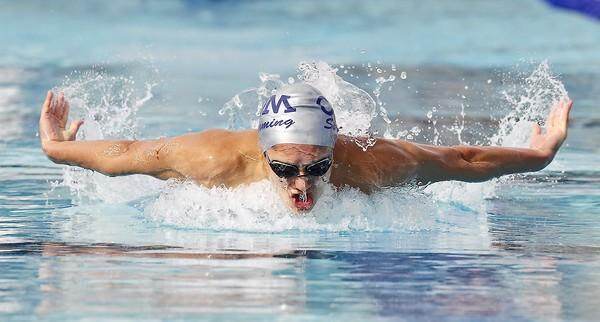 Justin Hanson, a butterfly/IMer out of AquaZot Swim Club in Southern California, has given a verbal commitment to Northwestern University.

Justin Hanson, a senior at Corona del Mar High School in Newport Beach, California, is trading in his flip flops for snow shoes. The fly/IM specialist who swims at AquaZot Swim Club has given his verbal commitment to join the Northwestern Class of 2019 next fall.

“The genuine camaraderie of the Northwestern team was unmatched by any other team I visited and I couldn’t be more excited to be guided under the expertise of Coach Jarod Schroeder and Andrew Sheaff. I can’t wait to be part the close-knit wildcat family and I look forward to racing in one of the most competitive conferences in the country.”

Hanson is a four-time finalist in the 200 IM and 100 fly at CIF-Southern Section Division I championships, and a member of CDM’s relays. His top times in fly and IM are:

Hanson should make an impact from his arrival in the fall of 2015. Already, his times in both flys and both IMs would have been top-five swims for Northwestern in the 2013-14 season.