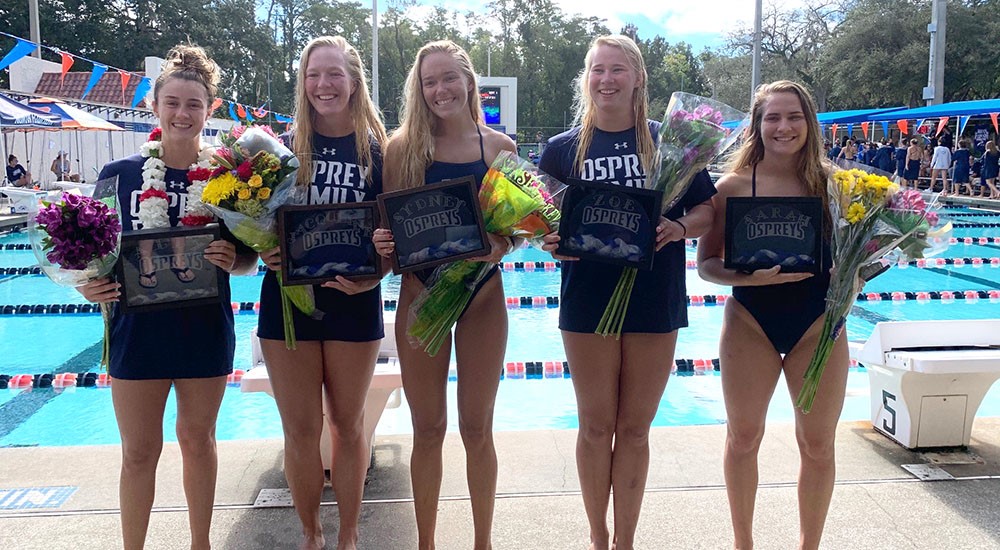 North Florida swimming took down Georgia Southern, 169-85, on Sunday, marking the first time since 2013 that UNF earned a win against the Eagles. Current photo via North Florida Athletics

It is the first time since 2013 that UNF earned a win against the Eagles. It is also the most points scored by UNF since 2009.

Topping the Sheets
North Florida finished first in all but one event against the Eagles. The Ospreys also finished in the first and second spot in eight total events.

Of Note
– Frantz shaved almost five seconds off her time in the 1000 free from the season debut against FGCU and Campbell.
– Wichalonis posted the season-best time in the 200 free in her debut in the event.
– Annie Fletcher posted her season-best time of 59.80 in the 100 back, while Barklund shaved time as she swam 58.83
– Groth bested her previous time (2:11.41) in the 200 fly by almost three seconds.

Coffey Talks
“It was a great job by our team today. We raced extremely well against a good Georgia Southern team. I’m very happy with the way we worked on the back half of our races today. It was a great way to send off our seniors with a win at home.” – head coach Ian Coffey

Up Next
North Florida has some time off before heading to Florida State on Saturday, Nov. 9. The Ospreys will face off with FSU, West Florida and Florida Southern at the quad meet.

While the Ospreys dominated the meet, Georgia Southern had several good showings.

Georgia Southern finished 1-2 in the 400 Free Relay. The team that came in first consisted of Lydia Evans, Bettie Logan, Holland Danskin and Melissa Cox. They finished in 3:42.86. Ashley Kubel, Jessica Ware, Sydney Petrie and Emily Jones made up the second-place team and finished in 3:55.19.

WHAT HEAD COACH AMANDA CALDWELL SAID
“I honestly thought we were going to race better today. The team has been putting in solid work and looking good in training the past two weeks. Isabelle Bray had another solid meet, getting up and completing a tough line up. I was proud of how Jessica Ware rebounded to win the 100 Fly.”

Isabelle Bray is an animal! I can’t wait to see what she accomplishes this season. Such a hard worker, proud of her 🙂