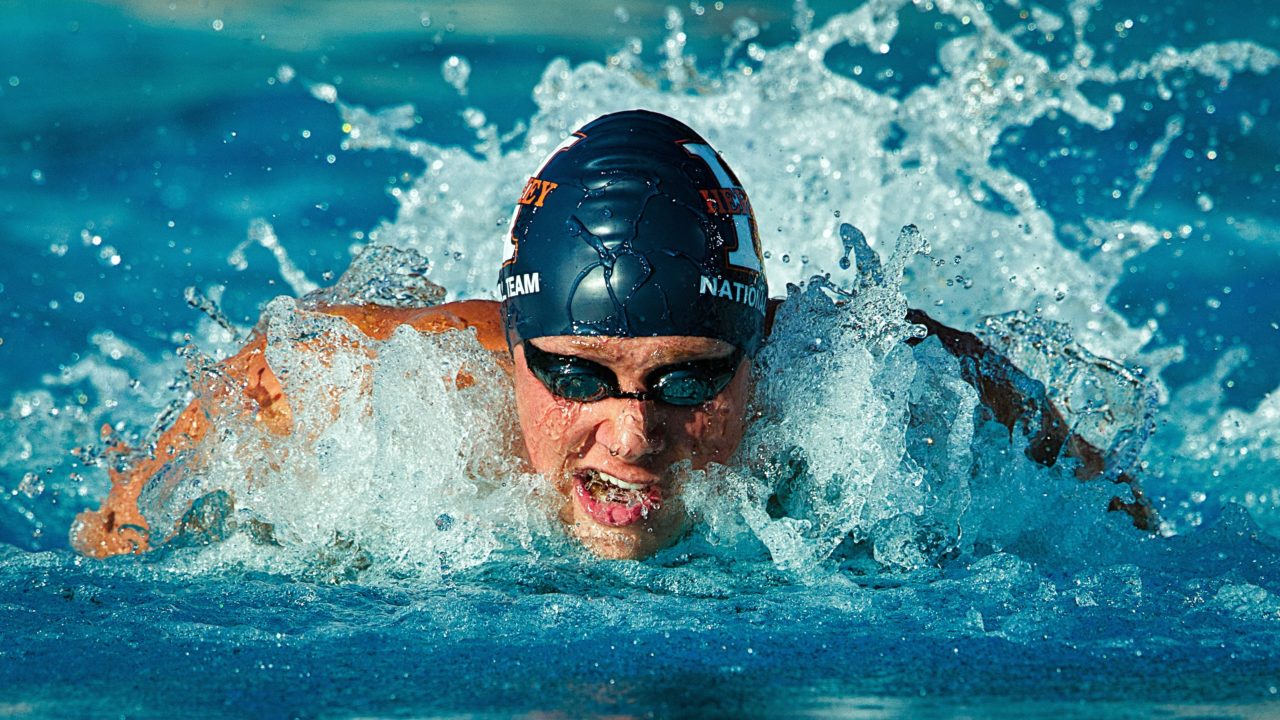 They took down the record set in 2011 by David Nolan and his team at Hershey. Archive photo via Tim Binning/TheSwimPictures.com

At the 2017 PIAA ‘AAA’ Championships, the quartet from North Allegheny swam a 1:20.95 to break Hershey’s 200 free relay state and national public HS record. This was a one-time swim, with no prelims– the PIAA state meet was moved to Saturday-Sunday instead of Friday-Saturday because of the snowstorm that hit the east coast recently. Because of that move, the entire state meet was swum as timed finals, and diving was moved to this upcoming weekend.

Legendary high school swimmer David Nolan, of course, led off Hershey’s relay with an incredible 19.58, which carried them to the 1:21.01 which set the overall (public and private) record in 2011. North Allegheny had two 19’s, and an overall more consistent showing, which ended up tipping the scale by just six-hundredths. They become the first public HS team recognized by the NFHS (the organization that keeps these records) to break 1:21.00 in the 200 free relay.

That makes North Allegheny the fastest public HS team in history, and the 2nd-fastest HS team ever. The overall record is still held by the Bolles team of Ryan Murphy, Santo Condorelli, Joseph Schooling, and Emiro Goosen. They combined for a 1:19.27 in 2012, a year after Hershey’s record swim.

While Gonzalez and Krigger are seniors for North Allegheny, there’s lots of hope for the future. Wright, their lead-off leg, is only a sophomore, while Mihm is just a freshman. Additionally, they did not use Mason Gonzalez, a junior, who won the individual 50 free last weekend with a 19.99.

Those splits don’t add up for the old record. They come out to 1:20.81 for the total time, so at least one of those splits must be incorrect.

Anybody know what David Nolan is up to these days? Did he retire from competition?

He may not be strong at LCM but I would have thought he’d do well at SCM such as the World Cups.

He has a Stanford engineering degree. I would imagine he’s putting that to use.

Their top sprinter was left off this, he swam anchor on the 200 medley and split a 19.31. They won by 3 seconds so they could have used him here and still won the medley. Take off the slowest guy at 20.64 and you lower the time 1.33 to a 1:19.62, doesn’t break the prep record but it comes really close

Hey buddy, I’m the leadoff on that relay (the “slow guy”). If you knew anything about swimming, you would know that the leadoff swimmer has a flat start, which you can’t compare to the other three times, which were off a relay start.

Yes, and 20.64 flat start, as a sophomore, is a remarkable swim.
Congrats Jack

That’s the spirit Jack. I don’t believe he was criticizing you at all, but more of a nod to the strength of your team. You guys made history and I’m damn proud of you. (Former NA swimmer ’81)