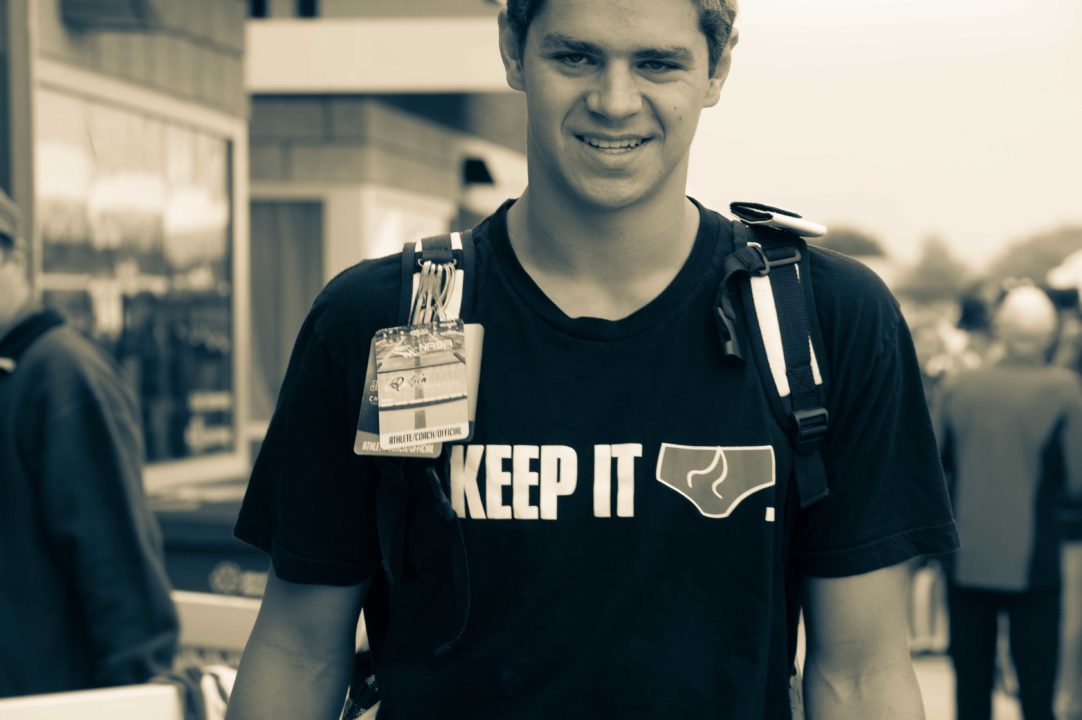 Swimming pools are oblong, blue and wet. They have strings of plastic sausages floating on top of them, knackered people swimming in them, raving lunatics pacing up and down beside them and people with no life sitting in front of them. Welcome to the wild, wild world of swimming.

2. “Seven days of no swimming makes one weak”

There is something primeval about swimming as a sport. At the end of the day it’s just a question of who can get to the other end of the pool first, but in order to go faster, athletes must correct the positioning of every part of their body and swim backwards and forwards every day, an awful lot. They train harder than Iron Man, have six-packs more toned than Taylor Lautner and buttocks neater than Gisele Bundchen.

3. “Swimmers: we do more flips in an hour than a cheerleader does in a lifetime”

The average swimmer does 280 flip turns a day, 1680 a week, 87360 a year (swimmers are particularly good at mathematics), more flips than a stuntman, tiddlywink or pancake. This explains why swimmers often look giddy: their brain doesn’t know what axis its on. Of course it may also be because their craniums are being crushed by rubber, or their kidneys are being poisoned by too many isotonic drinks.

Swimmers are so clean they squeak. They are more disinfected than a teething ring.

Most swimming instructors also swam when they were young, were tormented by their coaches and consequently don’t want to break the cycle. They have inhaled so much chlorine in their lifetime that they are more stoned than a Woodstock wellie. Although not yet scientifically proven, the sound waves emitted by a swim coach travel audibly through water. They like to shout using animal metaphors such as: “Stop bobbing up and down, you are not a rabbit” or, “A donkey could swim faster than you with a carrot up its arse”. Although totally altruistic – laying down their lives for their athletes well-being and results – they are also notoriously sadistic, inflicting muscle ache that would make the Spanish Inquisition blush: poles, tubes, elastic bands, paddles and foam floaters; anything that straightens, binds, pushes or pulls.

6. “We swim because we are too sexy for a sport that requires clothes”

Also consider the fact that swimmers have to stuff their bodies into black spandex more often than someone with a rubber fetish. For girls this job has to be undertaken in pairs and is no mean feat with no cushions of fat to manoeuvre around.

Swimming instructors break into a rash when they see a parent approaching, their tongues swell up in their mouths, making it impossible to speak coherently and they develop violent tinnitus at the mention of the words “tired” or “slipping school grades”.

These poor swimming parents have visited the swimming pools of some the most beautiful cities in their country. They wake up at 5:30 on a Sunday morning and drive three hours to a race meeting, there they will sit inertly for 10 hours, developing haemorrhoids on slabs of concrete, only jumping to life and screaming wildly, for the few minutes their children swim at lightning speed to the other end of the pool. Their enthusiastic: “Kick! Faster! You can do it! Go! Go! GO!” is heard by their children as: “glub, glib, wisha-washa, blib, blub, blub”.

You can’t help but admire all those who spend a large part of their lives in, or around, a swimming pool. They have a total passion for water and a dedication to their sport. Members of a swimming team have a strong sense of pride, direction, duty and endurance.

Through trophies and tears, these kids sure know how to splash with panache.

Thanks to Loretta Signori for providing this story originally published by Beyond Prose.

I’d be proud of that. That’s a great IM!

Or 400 freestyle! Or perhaps several events combined into one time!

Or maybe it’s the total time of all the races they swam that day.

Best one I’ve seen: “If I only have one day left to live, please let it be at a swim meet because the day never ends.”

You lost me with “Most swimmer’s mothers think they would melt if they came into contact with water and it takes them five years to learn the names of the four swimming strokes: ‘backwards, forwards, like a frog and like a dolphin.'” I don’t know where this author is from, but this isn’t the case anywhere I’ve seen and is pretty rude to boot.

I love breast stroke and butterfly

I don’t see that sentence in this article. Did I miss it? The tone of the article to me was actually supportive of parents and coaches of swimmers, appreciating the effort of both.

Oh dear! I certainly didn’t intend to offend anyone and apologise if I did! I just tried to find humour in a situation that is often very tough for parents, coaches and of course the athletes (I had to exaggerate a bit in order to be funny and certainly didn’t want to be rude) But the rewards! Ah! The rewards are ENORMOUS. It’s a wonderful world to be part of and I admire all those who dedicate their time to such a fantastic sport. Keep up the good work!

“When global warming floods the earth, swimmers will rule the world.”

“I swim. What’s your superpower?”

Is this the same Walter Soza that swam with AAAA and TCU? If so, I swam on a South Texas Zone team with you many (MANY) years ago, and still remember you on the blocks at finals waving a big Texas Flag– I still tell my swimmers about that.