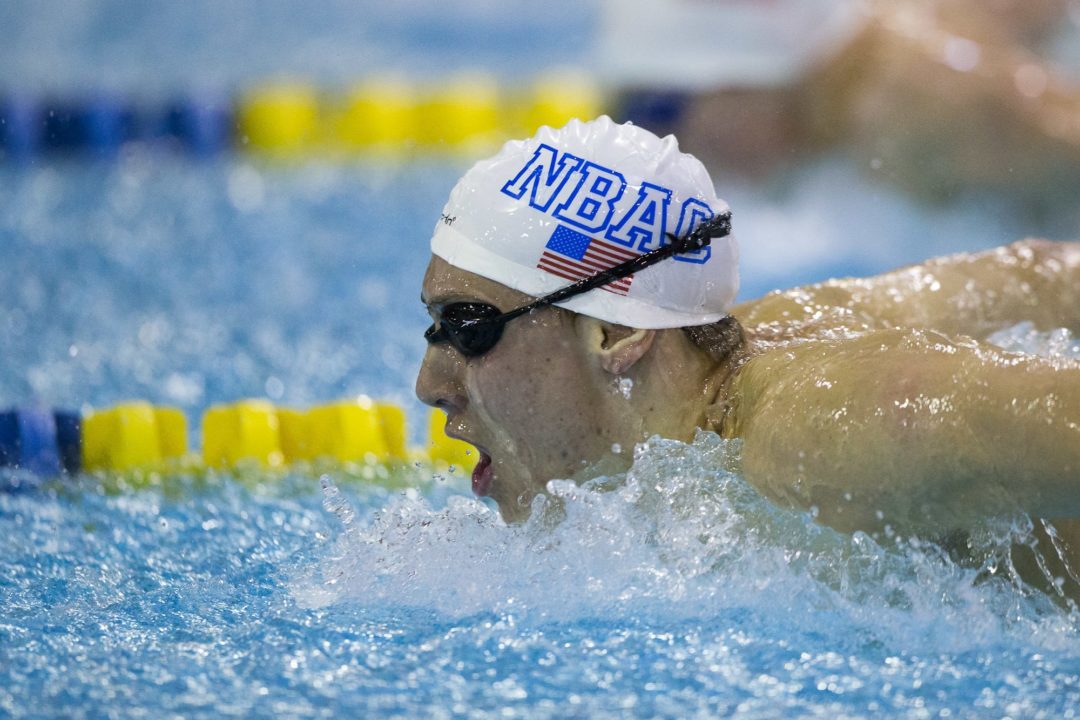 Can Chase Kalisz secure a spot on the Worlds roster tonight in the 400 IM? (photo credit: Tim Binning, theswimpictures.com)

Happy halfway, folks!  We’re through five of the ten sessions at the 2013 World Championship Trials in Indianapolis, Indiana, and so far, 25 swimmers have officially punched their tickets to Barcelona.  We should see more new names pass through tonight (Elizabeth Beisel, Chase Kalisz, Dana Vollmer, and Jessica Hardy are all likely to make the team), as well as some athletes doubling up (Missy Franklin, Ryan Lochte, Tyler Clary) to open team spots for relay swimmers currently waiting in limbo.

After initially announcing he was done with the most grueling event in swimming, Ryan Lochte decided a few months ago he wasn’t quite ready to put aside the 400 IM.  Despite putting a couple pretty impressive in-season swims in the event, he has once again put it on the back burner (for now), electing to focus on the 100 fly.  Scratching this event seemed like an inevitability up until a month ago, when Lochte turned in the fastest non-championship 400 IM in the world at the Santa Clara Grand Prix, reigniting the intrigue of seeing Lochte attempt to defend his title in Barcelona.

Even as the defending Olympic champion and #2 performer all-time, from a mental and physical standpoint, this has to be a big lift for Lochte.  If he qualifies in the 100 fly tonight (and I think he will), he’ll have a very realistic shot a two gold medals instead of just one in the 400 IM (Kosuke Hagino would also be standing in the way), and will keep him rested for the 100 back and 200 IM coming up this weekend.

If you haven’t heard at this point, a swimmer named Kevin from the University of Arizona set the U.S. Open record in the 50 breaststroke this morning… and his name wasn’t Kevin Cordes.  Kevin Steel, a rising Wildcat senior from Moorestown, N.J., blitzed the field out of lane 7 to touch in 27.33.

Even though Steel is seeded just 19th in the 100 breast, this breakthrough swim shouldn’t come as a surprise.  Since he swam his 1:03.28 seed time at Trials a year ago, Steel developed into one of the nation’s fastest breaststrokers in short course yards, placing second in the 100 behind the NCAA-record-setting Cordes earlier this year.  His incredible amount of front-half speed sets him up well for the 50 tonight; he was out in 23.90 (second-fastest in the field) in his 100 at NCAA’s, just 0.03 behind Cordes.

Tonight should be a great battle.  Question is… how much more speed do these guys have?  Is it possible that Cordes could just let Steel grab a team spot for Barcelona, since he would likely be given the right to swim this in Barcelona regardless?

There’s certainly a chance it could happen.  Since the 50’s of stroke are rarely swam on U.S. soil by fully-tapered, national-level swimmers, we could see U.S. Open records in the men’s and women’s breaststrokes and backstrokes.  The toughest is probably the women’s 50 breast, which top-seed Jessica Hardy set in a super-suit at the U.S. Open back in 2009.

It sounds morbid, but tonight could be the final realistic shot to make the team for Tom Shields, Tyler McGill, and Caitlin Leverenz.  That would be a pretty big blow for Leverenz and McGill, who are both routine members of Team USA.  McGill was expected to control the field in the 100 fly after turning in the #2 time in the world in 2012 (Michael Phelps being #1), but seems to be a little off at this meet, barely sneaking into the A-Final tonight.  Leverenz has been well beneath expectations this week, and tonight will likely have to make a comeback over the final 200 meters against Maya Dirado, who is having maybe the best meet of her life.

Although Shields is best known for his underwater prowess, he has continued to make big yearly strides in the long course pool.  The trend looked like it would hold true after Shields set himself up for a great week with a big drop in the 200 fly… but he has looked pretty flat since Tuesday night.  He finished a surprising 10th in prelims of the 50 fly, and was just 52.63 this morning.  It’s possible he was just holding back a bit in prelims, but, like we almost saw with McGill, that’s a dangerous game to play in a loaded field at a national meet.

I like how Morgan has to qualify all Stanford picks now …. Folks, he is clearly not biased and has great perspective. I think Shields will surprise is tonight though. Shields/Lochte 1-2

I’d say Leverenz is a better 200 IMer than 400 IMer so I’d hardly call tonight her last and best shot.

This is true… I suppose I shouldn’t have called it her “last shot”… For Leverenz, if she’s pretty far back in this, I don’t see her coming back with a great 2 IM.

Beisel’s time is of great interest.