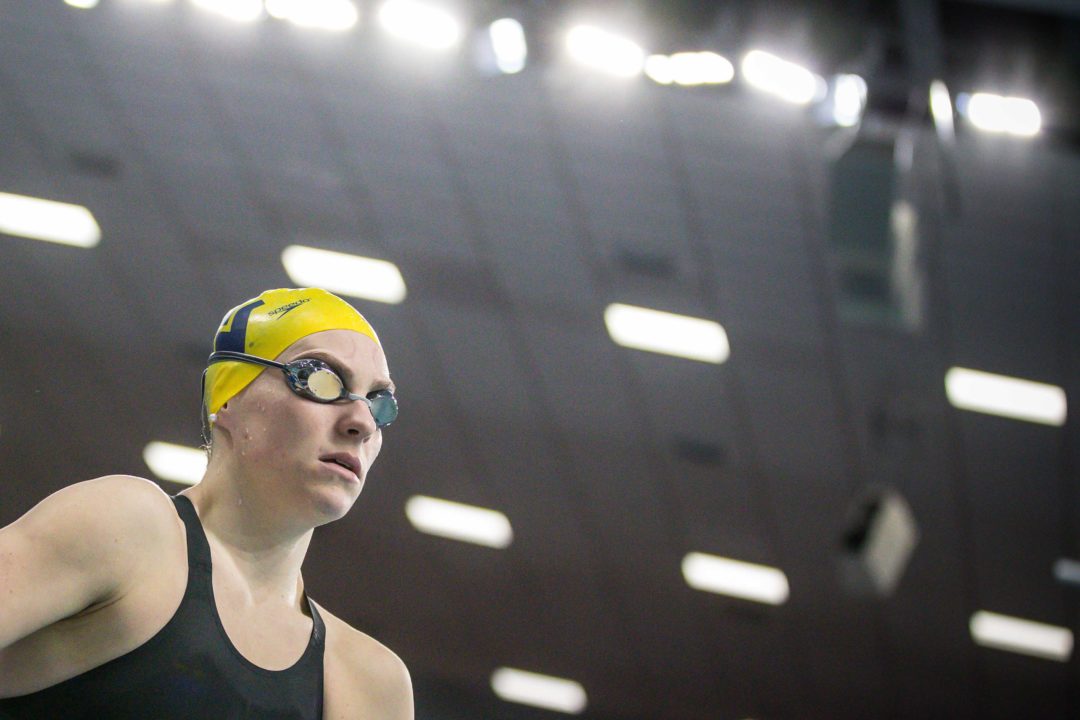 Morgan Bullock finished her deocrated college career as an athlete at West Virginia this spring at the Big 12 Championships. Archive photo via Jack Spitser/Spitser Photography

Niagara head coach Eric Bugby joined the program mid-season last year, after the program’s previous head coach, Ben Nigro, left the program in early October after 3 current or former members of the women’s swimming & diving team sued the school, saying that they were sexually harassed by members of the school’s men’s team, and that Nigro didn’t properly address the issue.

One of Nigro’s first tasks was to hire the program’s first full-time assistant coach, though ultimately none was never announced last season.

“I’m beyond excited to have Morgan join our swimming and diving program,” Bugby said. “She has an extraordinary background and the education needed to be a great coach and mentor for the Purple Eagles. She was one of the best swimmers in West Virginia University history and will be one of the top up-and-coming coaches in college swimming. Morgan will have the immediate impact any program is looking for to start a season, but it’s even more critical in the middle of a pandemic. Niagara University swimming and diving has exciting days ahead and I know we will be even better with Morgan on board.”

Bullock was a four-year member of the West Virginia women’s swimming team, competing in the fly and the IM. She was a three-time All-Big 12 First Team selection, as well as an Honorable Mention All-American for the 200 fly following the 2017-18 season. Bullock holds the Mountaineer records in the 200 fly and 200 IM and was on the 200 free and 400 medley record-breaking relay teams.

Bullock’s most recent coaching experience came via a year of private lesson. She has also worked as a coach at Club Mountaineer Swimming, where she worked with primarily 8-16 year old swimmers since 2017, and with 9-10s at Zeeland Age Group Swimming in 2016 in her hometown of Zeeland, Michigan.

She graduated from West Virginia in May 2020 with a bachelor’s degree in athletic coaching education and a minor in sports and exercise psychology. She did not qualify for the 2020 NCAA Championships, though that meet was eventually canceled because of the burgeoning coronavirus pandemic.

“I’m over the moon with excitement to be joining the Purple Eagle family this fall,” said Bullock. “I’m looking forward to having everyone safely back on campus and to continue the growth of the team in and out of the water. I would also like to offer a special thank you to Niagara University and head coach Eric Bugby for giving me this opportunity.”

Niagara competes in the MAAC, which has already canceled the fall 2020 sports season for its member institutions. The conference has not yet announced a decision on the winter season, which includes swimming & diving.