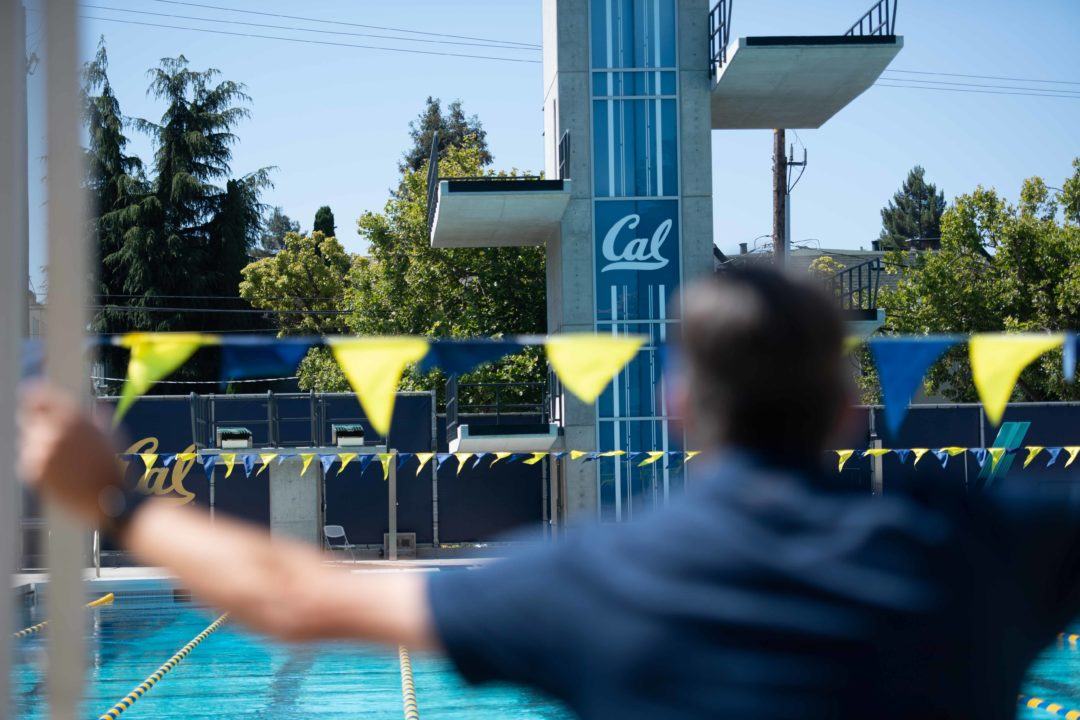 A pair of Golden Bear freshmen and an unheralded Cardinal were among the discipline champions in this year's Cal-Stanford showdown. Stock photo via Mike Lewis/Ola Vista Photography

The Cal and Stanford men met in Berkeley for one of the more frequent and unique meets in swimming, the two teams’ Triple Distance Meet. The meet is unscored, in terms of team competition, but the Cal Golden Bears won in five of the six individual disciplines, while the two teams split the relays.

Freshmen led the way for the Golden Bears, with Robin Hanson and Gabriel Jett collectively swept the freestyles. The format — simply adding up the times from each of the three distances — gives greater weight to the longer distances, where the margins of victory tend to be relatively larger. Hanson took full advantage of that fact, as he relatively cruised in the 50 free (20.35) and the 100 free (44.30) before dropping the hammer with a 1:35.70 in the sprinters’ 200 free. Stanford’s Andrei Minakov won the 50 free in 19.76, while Cal’s Bjorn Seeliger won the 100 free in 43.29 after finishing just 0.03s behind Minakov in the 50 free.

Fifth year Trenton Julian swept the butterfly races for Cal, starting with a 21.44 in the 50, then going 47.48 in the 100 before wrapping up with a strong 1:42.51. Julian has traditionally been more distance oriented, but right now he’s looking like he may fill in the hole left by Ryan Hoffer on Cal’s medley relays.

It wasn’t surprising to see Hugo Gonzalez win the IM group, as he’s one of the fastest men in history in both the 200 and the 400 IM, although the manner in which he earned his win was a little counterintuitive. He actually lost the longest race, the 400 IM, to teammate Will Roberts, 3:52.28 to 3:53.14. However, Gonzalez had previously won both the 100 IM by a second (48.61) and the 200 IM by over three seconds (1:45.92), with Stanford’s Jonny Affeld taking 2nd in both instances. Thus, Gonzalez had plenty of margin, and actually won the overall IM tally crown by nearly 7 seconds.

It was arguably surprising to see the backstroke title go to Cardinal junior Leon MacAlister, who was responsible for Stanford’s only individual discipline win of the day. MacAlsiter, an Australian native, was relatively quiet last season, but he had a banner day, sweeping all three distances against Cal’s vaunted backstroke crew. His meet started by out dueling Cal’s Daniel Carr in the 50 back, 22.20 to 22.32. That time was only 0.03s slower than his official lifetime best, which he recorded leading off Stanford’s medley relay against Cal last February. He then clipped his own lifetime best in the 100, putting up a 47.29 to beat Destin Lasco by exactly a quarter of a second. MacAlister’s previous best time was 47.41. He closed out the backstrokes by once against holding off Lasco, one of the fastest men in history in this event, 1:44.09 to 1:44.37.

A non-team-scoring meet, the Triple Distance Meet splits swimmers into event groups (butterfly, backstroke, breaststroke, sprint freestyle, distance free and individual medley) and requires swims at three different distances within the event: 50, 100 and 200 yards in the fly, breast, back and sprint free; 200, 500, 1,000 in the distance free; 100, 200 and 400 in the IM.

Full results from the Triple Distance Meet can be viewed here.

The lone event group Cal did not win was the backstroke, which was swept by Stanford’s Leon MacAlister.

UP NEXT
Cal will have nearly a month off from competition before it heads to Minneapolis for the Minnesota Invite on Dec. 1-4.

The Triple Distance Meet requires both teams to swim three distances of one stroke, with individuals racing at 50, 100 and 200 yards in each event. Distance freestyle swimmers race the 200, 500 and 1,000 while individual medley specialists swim the 100, 200 and 400 IM. Both teams also compete in the 200 yard medley and freestyle relays.

Andrei Minakov took home the individual event title in the 50 freestyle with a time of 19.76. Minakov’s effort secured an NCAA B standard time, the first qualifier of the season for the Cardinal.

Jonny Affeld, Rick Mihm, Preston Forst, and Luke Maurer also combined for a 200 freestyle relay win with a time of 1:20.69.

Hu and Dang combined with MacAlister and Minakov to take second overall in the 200 medley relay with a time of 1:27.76.

Stanford will be back in action on November 18th in Greensboro, N.C. for the NC State/GAC Invite. The divers will head to Austin to take part in the Texas Invite that same weekend.

Jett doing some big things at Cal early on in the season. Way to represent Clovis swim!

In my opinion Leon is very much heralded.

Minakov even splitting a 100 free is a little funny. It’s worked for him at times in long course, but you’re not going to get by doing that in yards.