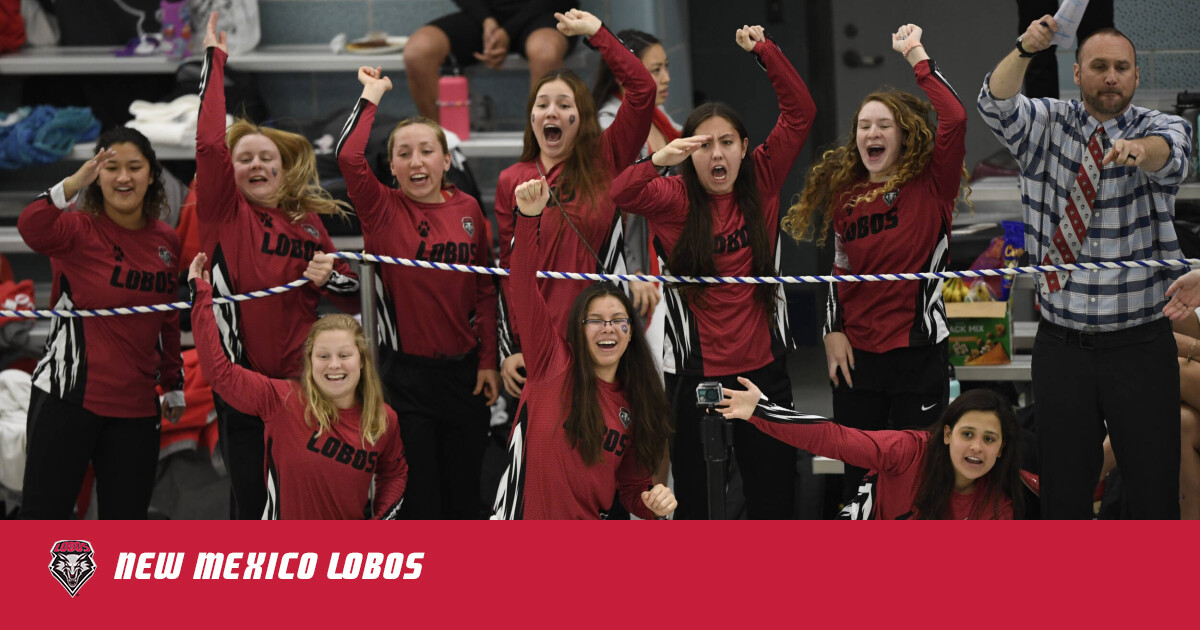 Unable to practice or compete, members of the University of New Mexico women's swimming & diving team have decided to turn their focus to next season instead. Archive photo via Hannah Foslien/NCAA Photos/New Mexico Athletics

The decision was made and supported by the student-athletes after a team meeting.

The team has not announced a schedule for the 2020-2021 season and, because of the state’s current health order, have not been able to practice.

The announcement comes as New Mexico also reported its first case of the UK variant of the novel coronavirus, which is believed to be more viral.

Under New Mexico’s “red to green” plan, “close-contact recreational facilities,” which includes some of the stiffest restrictions in the country, counties are able to reopen in a 3-stage system based on the latest coronavirus data.

To advance to the green zone, both would have to be true.

New Mexico is the 10th NCAA Division I program to have announced that they will cancel the 2020-2021 swimming & diving season, along with the 7 remaining programs in the Ivy League, Arizona State, and Division I newcomers UCSD.

“It’s an unfortunate circumstance for the student-athletes and coaches but one that I support ,” said Director of Athletics Eddie Nuñez, “We will continue to support our student-athletes throughout this time and we look forward to a successful return to competition in the 2021-22 season.”

Second-year head coach Keegan Ingelido noted that while it was not an easy decision for the team to make, it has the support of not just the team, but the staff, administration and sports medicine personnel.

“Every season we want to be able to compete to the best of our ability. We will now focus our training to be better student-athletes for next season, whether that be in the pool or the weight room,” said Ingelido, adding, “Mental health and academics are very important to our staff and department. We are doing everything in our power to provide our student-athletes with the resources to be successful in these aspects here at UNM.  The hope is that this will afford our team the opportunity to provide additional focus to excel as students and individuals as they do in athletics.”

Ingelido was thankful for the support of the administration in supporting the team during this time.  “I would like to thank Eddie Nuñez and Ryan Berryman for their support and guidance throughout this difficult process. I would also like to thank our compliance, sports medicine, and academic staffs for all they have done to help us through this transition.”

The 2020-21 season counted as a redshirt season for the entire team, so all student-athletes are eligible to return to the team for the 2021-22 season.  The current squad had only three seniors on the roster in captains Brooke Zukowski, Sara Rogers and Hannah Tiendas.  The team has announced nine additions for the 2021-22 season.

Zukowski and Tiendas were team captains along with junior Raine Gavino.  Said Gavino of the decision, “It was truly a tough call for the team and coaches to decide whether or not our team would compete during these unprecedented times. We were dealt unlucky cards and it was a struggle to get into a normal routine during the pandemic.”

Gavino added, “The only thing we can do now is use what time we have left in this season to grow both individually and as a team and be better for next season. We feel for our seniors, Brooke, Sara, and Hannah as they were unable to finish their collegiate journey. We would not be the team we are today if not for those three.”

UNM was returning six student-athletes that earned All-Mountain West honors at the 2020 championships, and all should be back for the 2021-22 season. Among those is Nicholle Toh, who as a freshman last season finished 2nd at the conference championship meet in the 200 fly.

Sad to see, and probably a bad omen for HS sports in the state which is tough for myself and my fellow seniors.

I hope the advocates for Swimming in the state can turn to those states who have safely opened and are practicing. Could they all not take classes remotely and keep practicing at the US Olympic Training Center perhaps? All the best to the coaches and swimmers and divers who are having to make career decisions during a difficult time. The vaccines are coming!

Why did they “need to compete in 4 meets prior to the championships”?? I thought the NCAA had created a waiver for the minimum number of competitions this year?

The number of meets is irrelevant since the team has not been in the pool but only for about three weeks all season. They had not been able to practice as an entire team due to capacity restrictions. They have a 10-lane indoor pool but only 5 swimmers were allowed along with coaches to meet the bodycount allowed.

The Public Health Order in NM for Pools is now at 25% occupancy…UNM actually has 23 SCY lanes + a separate 6 lane pool in Johnson Gym. The fact that they were only allowing 5 swimmers at a time is ridiculous. Every single person could’ve swum at the same time even going 1/lane. This was a UNIVERSITY decision. The pool manager WANTED to open up.

Ultimately the athletes pay the price. It is sad. Hopefully there is a better outcome for ’21