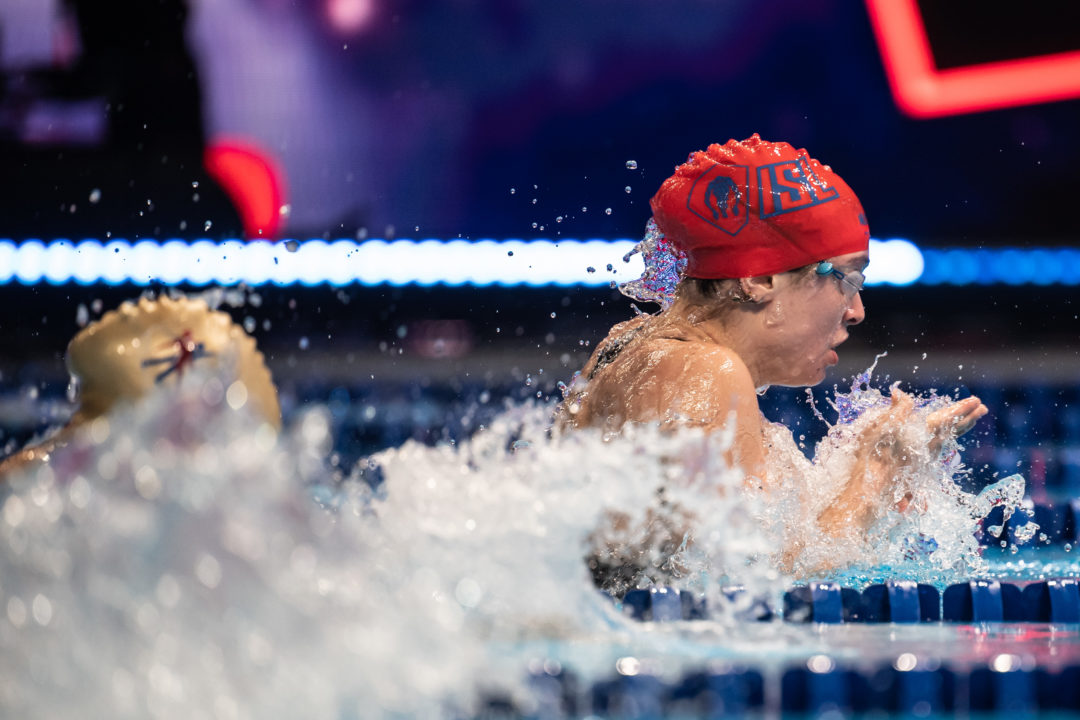 The International Swimming League will now require athletes to be 18 or older to register for the ISL Draft Pool, with two-year contracts for all rookies. Archive photo via Mike Lewis/Ola Vista Photography

The International Swimming League (ISL) has released more details on its draft process. One important piece: only the two non-playoff teams from last year will get 1st-round picks.

2021 will be the first season in which the ISL will hold a draft to determine rosters. Teams are still able to retain up to half of their 2020 rosters via several rounds of swimmer protection. We break down all the steps below:

Round 1 of retention: Each GM announces 4 more swimmers to retain.

Round 2 of retention: Each GM announces 3 more swimmers to retain.

Round 3 of retention: Each GM announces 2 more swimmers to retain.

Round 4 of retention: Each GM announces 1 more swimmer to retain.

This multi-round system could force some on-the-fly decision-making. For example, if breaststrokers around the league are being retained, a team may pivot to retain its own breaststrokers, seeing that the draft pool is getting thin in that event.

*GMs can retain up to 15 swimmers, but aren’t required to retain all 15. So a team that wants to turn its roster over from last season can choose not to retain the maximum number of swimmers in any of these rounds.

All unretained athletes join the ISL Draft Pool, along with any new additions to the ISL.

*Note: it’s still unclear whether teams can retain athletes who were announced to a roster last year but did not ultimately compete. That would include many of the top Australian swimmers, especially on the London Roar.

Round 1 of Draft: GMs of the lowest-finishing teams get to select 1 swimmer each from the ISL Draft Pool:

*Not every franchise will have a draft pick in every round, as explained more in day 2 below.

Fan Voting Opens: After the first round of the draft, the ISL will open a fan vote, allowing each team to retain 1 more athlete from their 2020 roster. In order to vote, fans will have to (1) register on the ISL platform and (2) purchase a subscription to stream either the full ISL season, or one team’s specific matches.

Each registered fan will get one vote to cast for one team to retain a swimmer from 2020.

Fan-Vote Players Retained: The ISL will kick off the day by announcing the results of fan voting, and which players will be retained to their 2020 teams through fan votes.

ISL Draft Continues: the draft will continue with 13 more rounds. One important note is that not every team will have a pick in every round. The lowest-finishing teams from the previous season get picks in the early rounds, and the top teams don’t get picks until much later. We’ve visualized the pick order below, with the team numbers referring to each team’s final rank in the previous ISL season:

For 30 days* after the ISL draft, GMs can negotiate with remaining swimmers to fill out their rosters. GMs can only sign athletes from the ISL Draft Pool.

*In future seasons, the signing period will be 60 days. For 2021, the period is shortened to allow for international travel arrangements amid the ongoing pandemic.

*Athletes must hit these times between January 1, 2018 and May 31, 2021. Athletes must better the cutoff time in at least 3 different events. (Different courses of the same event still count as one event, so athletes can’t make the 50 free in SCY, SCM and LCM and count it as three events).

The new ISL rules also show how the league plans to handle contracts and free agency in future seasons. The ISL has created two categories for athletes: rookies and veterans.

Veterans have competed in the ISL in either 2019 or 2020. In future seasons, a veteran swimmer will be an athlete who has competed in 2 ISL seasons with an ISL team.

Rookies are all athletes who aren’t veterans. That should include brand-new ISL swimmers, whether they just turned 18, turned pro out of the NCAA, or simply didn’t compete in the ISL in past seasons. Beyond 2021, rookies will remain “rookies” for their first two seasons in the league.

There will be a 60-day window after the end of the ISL season in which ISL veterans can negotiate with the GM of any team – though that is subject to specific contractual agreements. That suggests a sort of “free agency” period in which veterans not under contract can negotiate and sign anywhere. It may also lead to multi-year contracts for athletes (to keep them from free agency), or clauses in contracts governing the negotiation with teams during that free agency window.

So, for example, an ISL rookie drafted this year will sign with a franchise for 2021 and 2022. If after 2021, they want to switch teams or adjust their contract, they can opt out of the second year, but will have to sign a new two-year deal for 2022 and 2023, with no chance of opting out before the 2023 season is over.

Here’s a flow-chart from the ISL site to explain the system:

Is there a minimum salary? How are teams budgets decided?

Dont like the idea of not allowing swimmers under 18 to participate. Ofcourse, they should be represented by an adult (parent, agent) but would restrict a lot of budding swimmers. eg: Pilato suddenly goes from being a star to not being able to participate. Seems strange to me.

I think it makes sense that the league doesn’t want to be responsible for caring for minors while they travel all over the world to meets throughout the season (it’s not always gonna be a condensed season at a single location like last year). The league’s also not lucractive enough to justify a minor travelling with a guardian and I doubt ISL want to be responsible for those expenses either.

it’s sad though, less of a chance for wjr to pop out of nowhere

I just see this as another step in the direction of legitimizing the league in the eyes of the greater sporting world.

Plus the fact that 17 and unders are not fully developed in terms of mental and physical health. It’s not like we see 15 yr olds competing in the NFL or the FIFA WORLD CUP

The next step is tossing the jackpots in the trash and avoid adding any other “game show” like features.

Plenty of teenagers compete at the highest levels of sports. Check out a gymnastics meet sometime.

Not really sure why they’re changing the rules on that two years in.

Well, gymnastics have been building a really good reputation lately for taking care of those teenage athletes…

Were those all professional gymnasts?

But also yes, I cannot think of another sport with that exact issue.

Speaking of FIFA World Cup: Kylian Mbappe, the guy who lead France to their win in 2018 was 17 at the time. It really is not uncommon to have under 18 year olds compete at the highest level in most sports.

in my opinion, the ISL should have the goal to host meets with the fastest swimmers in the world, no matter their age. Just like in any other serious major sports.

Mbappe was 19. Only a handful of soccer players have ever played in the world cup before the age of 18, and none since 2002

If I get it right, the two swimmers selected in the first round of the draft will not be eligible to be retained through fan voting.
Otherwise, since fan voting results are announced after round 1 of draft, there is a scenario where a swimmer is selected to join a team through the first round of draft and at the same time fans have voted to retain him/her.

That appears to be the case to me. Although I think it’d be rare for that to come into play. My guess is that the top two draft picks are probably NCAA grads or elite international 19-year-olds, and anybody not retained in the top 16 on their current team probably won’t command a top-two draft pick overall.

Does anyone know when the teams can put more swimmers into the retention group?
Will it be after a round is completed?
Or would it be as in some of the expansion drafts for the professional sports leagues in the USA where you can add one or more swimmers to the retention group after one of your athletes have been pick up by another team?
Otherwise one team could potentially loose up to 9 swimmers during day 1, swimmers 6-14.
Without having thought this through at all, my recommendations would be that after you have 1 swimmer picked, you can add one more swimmer to your protected list (could be 2 more to the protected list… Read more »