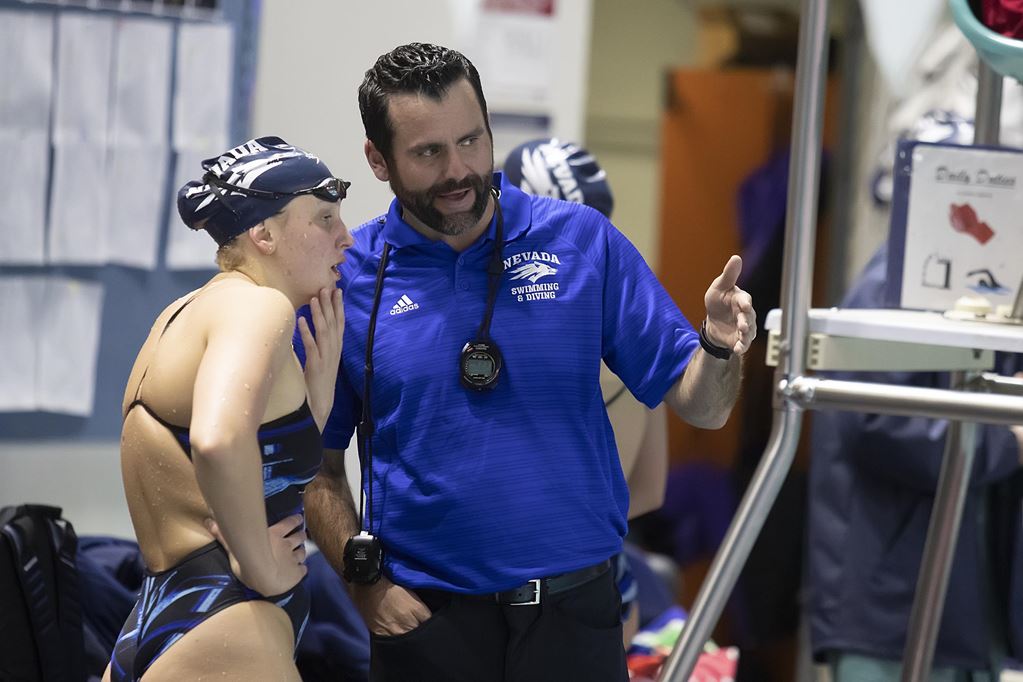 Cholodovski Lima, the runner-up in the 50 free, went on to win both the 200 IM and 100 free decisively. Stock photo via Nevada Athletics

Washington State kicked off its regular dual meet season by hosting Nevada on Saturday, with the Wolfpack coming out ahead, 172-90. The Cougars sole event win came in the 50 free, where junior Chloe Larson narrowly edged out victory. Larson got her hand on the wall in 24.21, just .03 seconds ahead of Nevada’s Andressa Cholodovski Lima. The Cougars also batteld hard with Nevada in the 200 free relay, but ultimately fell short. Josien Wijkhuijs got Nevada out to nearly a second lead on the first leg, splitting 23.99. Washington State then cut into that lead with 23.95 and 24.34 from Paige Gardner and Emily Barrier respectively. Larson then anchored WSU in 23.73 to 23.54 from the Indiana transplant Ileah Doctor for Nevada. The Wolfpack finished in 1:36.46 to the Cougars 1:36.98.

The Cougars will travel to Fresno, Cali. Oct 11-12 to compete in the Chic-Fil-A Invite.

PULLMAN, Wash. – The Nevada swimming program picked up the first dual meet win of the season after outscoring Washington State, 172-90. The Pack won 13 of the 14 events at the Gibb Pool in Pullman, Washington.

The meet started with a 200 yard medley relay win for Nevada. Imogen Watson, Donna dePolo, Josien Wijkhuijs and Ileah Doctor took first with a time of 1:44.15 but the “B” relay took second with a time of 1:46.94. That relay squad was comprised of Montana Lloyd, Wiktoria Samula, Julia Adamczyk and Colette Berkenfield.

Transfers Ileah Doctor and Gianni Pitto both made appearances with Doctor finishing third in the 50 free with a time of 24.26 and Pitto taking fourth in the breaststroke with a time of 1:05.75. Pitto also competed in the 200 breast and finished third with a time of 2:19.87.