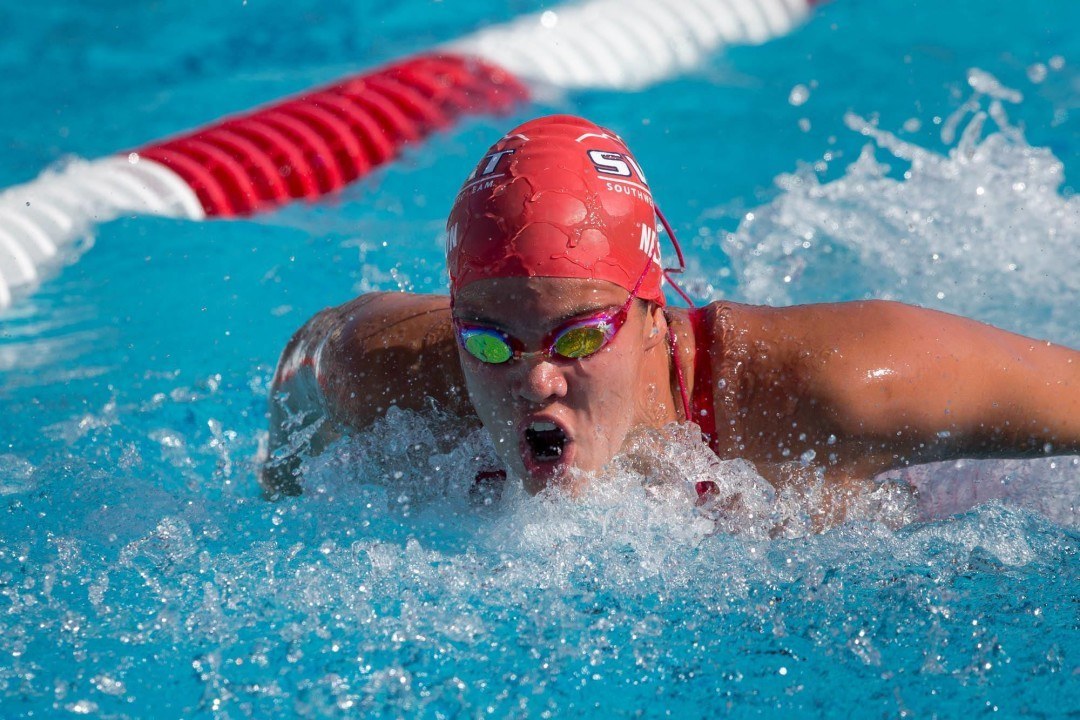 Beata Nelson stole the show today, winning both of her individual events and providing stellar relay splits and breaking her own national public HS record in the 100 fly. You can read more about that new record here.

She first led off Verona/Mt. Holeb’s medley relay with a 24.81 backstroke split, powering them to a lead that proved insurmountable as they took the event at 1:43.96, finishing ahead of Arrowhead, who was kicking off their big points push for the team title.

Nelson won the 100 fly in 51.62, setting a new national public HS record and coming within a tenth of Katie McLaughlin‘s 100 fly overall HS record. She swam to the win in the 100 back, too, posting a 52.13 to blow out the field by more than two seconds and take her D1 state record down by 1.02 seconds. Finally, Nelson blasted a 21.88 anchor leg on the 200 free relay as Verona/Mt. Holeb grabbed first in that, too.

Nelson may have been the popular name on headlines from today’s meet, but Stanford commit also Katie Drabot swam a fantastic meet and lowered some of her personal records, as well. Drabot, swimming for Cedarburg, won the 200 free (1:44.21) by over five and a half seconds and then led a Cedarburg 1-2 with Skylar Fore in the 100 free. Drabot was 48.55 and Fore was 49.92, just squeaking in under 50 seconds.

Cassy Jernberg earned a big win in the 500 free, posting a 4:46.93 as the only swimmer under 4:50 after finishing 3rd in the 200 free. The Milwaukee King senior is heading to Indiana next fall.

While Arrowhead only won the 50 free, they were powered in the team scores by runner-up finishes in the 200 free, 200 IM, 100 fly, 500 free, and all three relays. Sarah Laabs, Megan Doty, and Abby Cabush were huge parts of this team effort for them.

one question: why does Beata decide to commit to the Badgers? I am a huge fan of Beata and the Badgers but I think she should have went to a bigger and better place like Cal or

Beata probably wants to stay close to home, and Wisconsin is a good enough program to push her (think Ivy Martin).
At Cal, Beata would be just another Tran/Bootsma/Pelton/Thomas/Osman/Bilquist, etc etc etc. Over the last few years, Cal has recruited absurd levels of Bk/Fly talent, but produced mixed results from them.

And talking about Katie Drabot, I’ve found a little TV report from last September about her.
https://www.youtube.com/watch?v=jCeIxOSt0Tk

Great performances by Nelson and Drabot.
From a long course point of view, I would say that Katie Drabot shows we must seriously count on her for an olympic qualification next year in the US 4X200 free relay. She’s on the right track.
Beata Nelson is a monster yards swimmer and will be a college star.

Although Beata swam a great meet. Drabot definitely stole the show with pool and State records in both her events and leading off her 200 free relay with a split of 22.64 beating the state record that was broke tonight. Wisconsin has 2 best swimmers in the nation from the class of 2016. More attention from WISCA has always gone toward Beata. Let’s be fair WiSCA and give credit to where credit is due!