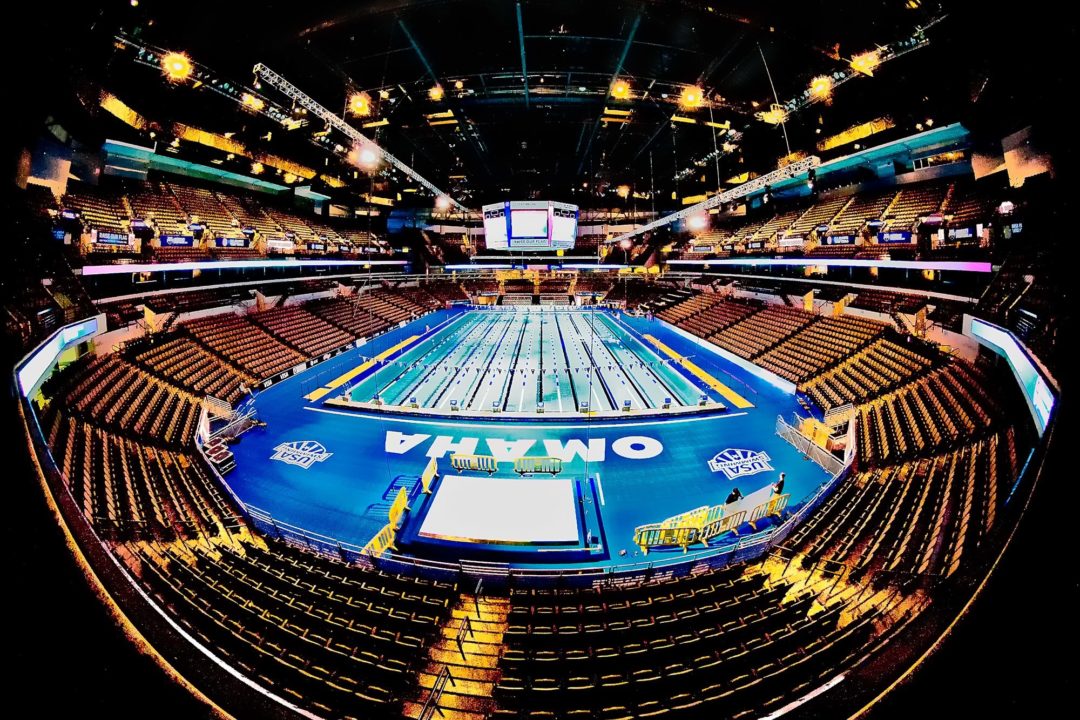 Nebraska has taken all restrictions off indoor venues, though there's no guarantee yet every seat will be filled for US Olympic Trials in June. Stock photo via Mike Lewis/Ola Vista Photography

The state of Nebraska on Saturday moved from the “blue” to “green” phase of its pandemic response plan. Among other things, the maximum capacity for indoor gatherings goes from 75% to 100%.

“It is very promising to hear the news of the capacity increases in the city of Omaha,” USA Swimming COO Mike Unger told SwimSwam. “We are monitoring this carefully and working closely with the USOPC, the venue, CHI Health and Douglas county to gather further information. Every [U.S. Olympic Team] Trials decision will be made with the athletes’ health and safety top of mind. We will continue to be cautious and methodical in all our decision-making, with the end goal of staging two incredible events and choosing the greatest Olympic team.”

The venue does have a number of big events coming up. Creighton basketball, which uses the CHI Health Center as its home arena, has been limiting its capacity to 10% of capacity, even when they could have had higher capacity. A recently-announced Disney on Ice production scheduled f0r March 11-14 that was announced last week will allow 50% capacity.

The venue will also play host to the upcoming NCAA Women’s Volleyball Championships. The NCAA is still working on its own independent analysis of what sort of capacity maximums it wants to allow as well.

In short: just because the venue is open to 75% capacity, doesn’t mean that 75% capacity will be allowed. Larger stadiums like this have been subjected to tighter restrictions throughout the country because of the scale of the venues.

If nothing else, the news means that USA Swimming has more operational flexibility within the regulated capacity limits.

The organization said last week, when announcing the new Wave I/Wave II plan for the Olympic Trials, that it needed about 7,700 spectators, 60% capacity, to break even on the costs of the event.

The move from the “blue” phase to “green” phase is based on hospital occupancy. Specifically, the 7-day rolling average of number of hospital beds filled with COVID-19 patients is less than 10% of all staffed hospital beds in the state.

Omaha will leave its mandatory mask ordinance in effect until February 23 2021, with an extension to late May on the table.

Douglas County says that organizers of gatherings of 1,000 people or more (more lenient than the 500 or more state order) must still submit a “reopening plan” to their local health department and receive approval before holding events.

Other than that, there are no restrictions on gatherings or venues in the “green phase” of the state’s reopening plan, though there is still “recommended guidance.”

Other Impacts of the order:

Nebraska is already planning to hold its 3-day high school swimming & diving state championship meet from February 25-27 will a full contingent of swimmers and divers, plus prelims and finals. The only change is splitting the meet finals into separate boys’ and girls’ sessions.

In January, the NSAA (Nebraska School Activities Association) announced that the meet would be held without spectators.

The NSAA has not announced an update to that plan after the state moved to the “green” phase.

According to New York Times data, the number of new daily coronavirus cases have plummeted in Nebraska since their peak of around 2,400 just before Thanksgiving. The most recent 7-day average of new daily cases in the state is just 500.

At 26 cases per 100,000 residents over the last week, Nebraska ranks among the best third among all states in terms of number of coronavirus infections. Douglas County, where Omaha is located, is slightly above that average at 29 cases/100,000 residents daily, with a 14% test positivity rate over the last 14 days.

The number of recorded COVID patients in hospitals in Nebraska has fallen from a peak of 976 around Thanksgiving to 320 at the end of January.

At 9.35 COVID-19 vaccine doses per 100 residents, Nebraska is distributing the vaccine very close to the rate of the national average.

You know you just can’t fix stupid
The Covid19 death rate is as high as it’s ever been and we have new varients spreading like crazy AND THE SUPERBOWL SUPER SPREADER EVENT SET FOR SUNDAY
Buy hey sure, let’s try and make an extra buck at the expense of moms and dads

If they’re going to allow full capacity for spectators, then why can’t wave 1 and wave 2 be held together as one meet? More $$$?

I feel like this puts our Olympic athletes at risk. If they catch covid at trials they’re totally boned.

“According to New York Times data, the number of new daily coronavirus cases have plummeted in Nebraska since their peak of around 2,400 just before Thanksgiving. The most recent 7-day average of new daily cases in the state is just 500.”

15 inches of snow in one sitting will do that.