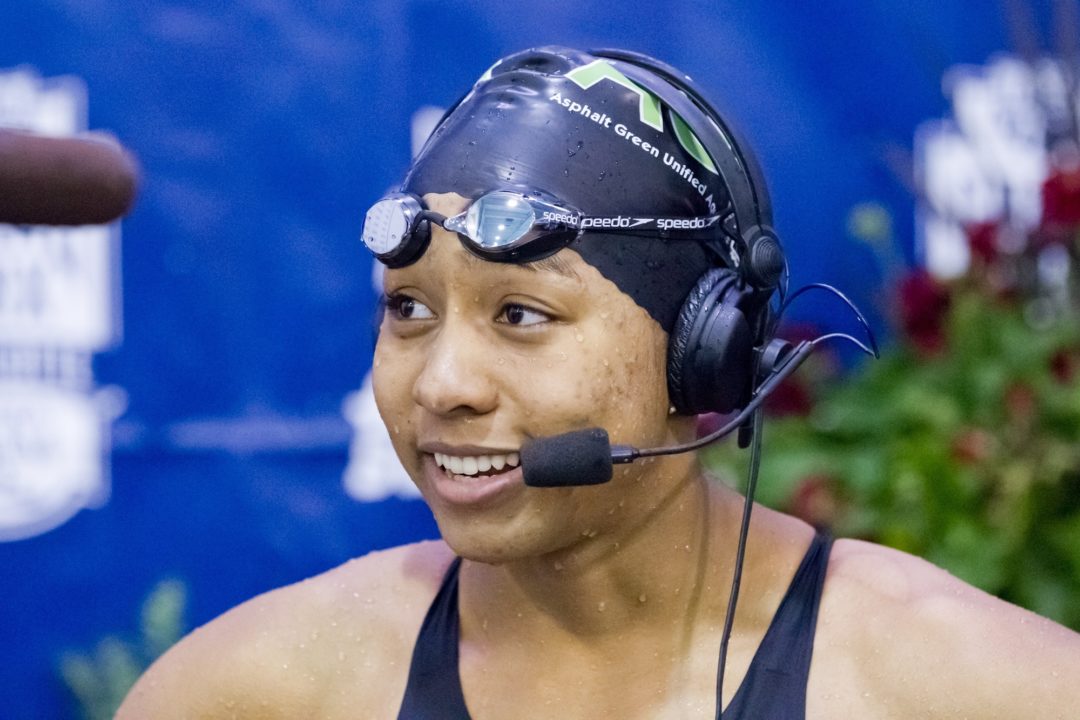 Day 2 was a bit crazy in Orlando at the NCSA Junior National Championships, with a timing malfunction leaving parents and fans from afar scrambling for results.

Have no fear, though; meet organizers are working hard to get everything running by finals, and for now we have the full results from Tuesday finals and Wednesday prelims. See those here. (Yards meet).

All eyes tonight will be focused on Jack Conger in the 200 backstroke, where some expect a possible American Record, and most anticipate in the least a National Age Group Record. His best time of 1:38.75 is two seconds away from Ryan Lochte’s 1:36.81 all-time best.

Robert McHugh, of the Baylor Swim Club, is the 2nd seed in 1:44.21; he also took the top seed in the 200 fly in a very-good 1:45.06. USC-bound Reed Malone is 2nd in 1:46.20, and Michael Domagala 3rd in 1:46.68. That will be the biggest showstopper in tonight’s final, but the best race might be the 100 breaststroke. Andy Schuehler of the Jersey Wahoos took over a second off of his best time to be the top seed in the race with a 54.46. Close behind him, though, are some very well-known swimmers, including Nitro’s Will Licon, Michael Duderstadt from Panama City Swim, and the Northern Kentucky Clippers’ Maxwell Williamson. All four of those guys are high school seniors going to big-time programs next year, and will look to cap their junior careers with a victory.

15-year old Kennedy Lohman of the Lakeside Swim Team took the top seed in the 100 breast with 1:01.49, followed by Sara Borendame from the junior group of Tucson Ford.

Manuel was much, much faster in prelims than an impressive lineup of sprinters that includes names like Janet Hu, Nicole Stafford, Lia Neal, Mary Schneider, and Kylie Stewart in the A-Final. Liz Nelson, a 14-year old from the Dane County YMCA in Wisconsin, and Kristin Malone, from the Shorewood Swim Club also in Wisconsin, will join them in finals.

Mount Pleasant’s Junior National Teamer Megan Kingsley took tops in the morning in the 200 fly in 1:56.56.

And last, but certainly not least, National Teamer Kylie Stewart took the top seed in the 200 back with a  1:54.24. After her wander into distance swimming on Tuesday (where she dropped 13 seconds in the 1000), she’s back in her primary event on Wednesday.

Among those chasing her will be names like Janet Hu, Kaitlyn Jones, and Becca Mann, all of whom are National Age Group or National High School Record holders.

Thank you swim swam for posting results!!! Live results are not working and meet is not listed on meet mobile!!!