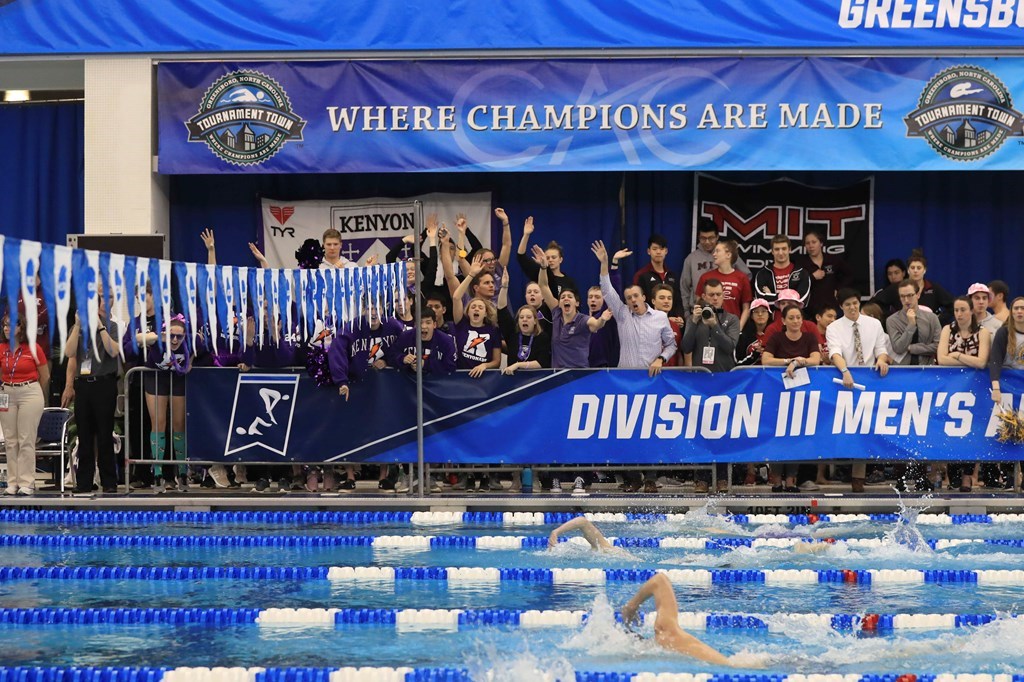 Home to 2 of the most successful Division III swimming & diving programs in history, the NCAC has canceled its winter sports championships for 2021. Stock photo via Carlos Morales/ Kenyon

Celia Ford, who placed 3rd in the 100 fly at the 2020 Maryland 3A/4A High School State Championship meet, will swim at Kenyon next fall.

The North Coast Athletic Conference (NCAC) has joined the NESCAC as the 2nd powerhouse NCAA Division III Conference to cancel all conference play and conference championships for the 2020-2021 winter sports season. This is in response to the ongoing global coronavirus pandemic.

The NCAC follows the NESCAC, which announced a similar decision last week.

Like the NESCAC, the NCAC will allow member institutions to schedule their own outside competition if those institutions want to.

The NCAC institutions have all agreed that they will not return student-athletes to campus for practices or other athletically related activities between Thanksgiving and New Year’s Day.

“In keeping with public health guidance, members have maintained universal masking and physical distancing protocols, limits on travel on and off campus, and limits on the size of on-campus gatherings, as well as contact tracing, quarantine and isolation protocols. Additionally, many of our institutions have made, or are considering, significant modifications to the 2020-21 academic calendar. As a result, many of our students will not return to campus for the spring semester until late January or early February.”

The NCAC is home to 2 of the most successful Division III swimming programs in history, Kenyon College and Denison University.

The Kenyon men have won 34 of the 45 NCAA Division III Championships ever offered, with Denison having won another 5. Those are the two highest totals among Division III schools.

Both Kenyon and Denison say that they have not yet made a determination about spring sports or about playing a modified fall sports schedule during the spring season.

Denison, specifically, says they maintain “hopes of competing” this season, and in an FAQ section say that it is “expected that the NCAA threshold for conducting championships in any Division will be that at least 50 percent of the teams competing in any sport mus conduct a regular season.”

Foolish. Competition is possible – plenty of schools doing it safely.

Yes yes please compete, it is most definitely “safe”

What a copout. The coronabros must be celebrating.

That decision is unfortunate, but perhaps not surprising (given NESCAC’s decision in that regard). • Given the likelihood that there will not be an NCAA Swimming and Diving Championship meet in March, despite the fact that many schools are or will be practicing/training now and/or during their spring semester, what options are there for Division III swimmers nationwide to have a meaningful experience this year? • Here’s a suggestion. Presume that there will be no conference championship meets in February of 2021. There may be some or many dual meets, some virtual and some held as usual. Schools should start counting practice days in earnest, offering team training perhaps three days weekly between now and Thanksgiving. • Many, perhaps most,… Read more »