Records have been falling like flies after the first day of racing at the NCAC Championships, hosted by Denison University in their home pool, the Trumbull Aquatic Center. The Denison men and Kenyon women are currently leading after Day I. Current photo via Kenyon Athletics 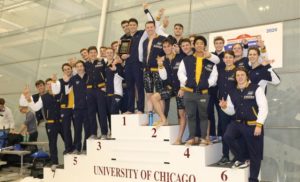 The Emory men won the meet-ending 400 free relay to solidify a 22nd straight title, with the women matching that feat.

After a fantastic night of racing to open up the NCAC Championships, hosted by Denison University in the Trumbull Aquatic Center, the Big Red men and the Kenyon Ladies currently sit atop the respective gender standings.

Last night began the four day meet with the men’s 3 meter diving competition, in which Denison claimed the top six spots  (led by Connor Dignan – 645.70 points, a new national record), scoring a total of 180 points before any swimmers even hit the water. Thus, the Lords began the second day with an almost 140 point deficit.

DU got off to a good start, winning the 200 freestyle relay. The team of Ryan Fleming, Conrad Wuorinen, Damon Rosenburg and Carlos Maciel posted a 1:22.98 to claim victory. Kenyon – top seed going into finals – was second in 1:23.04. Depauw’s 1:24.25 was good for third.

In the 500 freestyle, the Lords kicked it into serious gear to try to begin making up some of the points from DU’s divers. Alex Seaver dropped five seconds from prelims to finals to win the 500 with a 4:30.07. The freshman for Kenyon just outtouched the defending NCAC champion and teammate Joe Guilfoyle (4:30.14). The two were joined in top three by Harrison Curley, also of Kenyon to take over the top three spots. Of note: there were five athletes who were sub 4:40 in the morning who were not included on the scoring roster. Unfortunately the live resultsdon’t show time trials – almost certainly there were some second swims after the main events of tonight!

Of the three athletes who went under the NCAC record in the 200 IM in the morning, only two duplicated the feat at night – and only under the old record, not the new one set by DU’s Maciel in prelims (1:49.71). This particular race was a beauty to watch – the champion Maciel came in .01 ahead of teammate Jackson Humphrey who had led by over two seconds at the halfway mark. (Final times were 1:49.71 for Maciel and 1:49.72 for Humphrey.) Trevor Manz, a Kenyon freshman, rounded out the top three with a 1:50.20. Fellow Kenyon freshman Ian Reardon was the third athlete in the morning to have gone under the old NCAC record with Maciel and Humphrey; he finished fifth in finals (1:51.43).

Fleming claimed his own individual NCAC title in the 50 freestyle for the Big Red. His time of 20.45 was just a hair off the pool record set by teammate Wuorinen at 20.43. The pool record holder himself came in second, touching in at a 20.50 to hold off Kenyon Lord Austin Caldwell (20.69). The top heat of the 50 was stacked with Kenyon and Denison swimmers, and a few trickled down into the B final as well. Austin Pu a Kenyon freshman won the B final with a 20.90 – a time which would have placed him fifth in the A final.

To close out the night on the men’s meet, the Kenyon Lords claimed victory in the 400 medley relay. The team of Curley, Manz, Christian Josephson and Caldwell posted a 3:16.43 to break the NCAC record and claim the event title. Curley’s lead off leg was a 49.06 which gave about a second and half cushion for Manz to hold off DU’s national record holder Rosenburg on the breaststroke leg. From there it was smooth sailing – Josephson outsplit Rich and Caldwell lost only .01 to Wuorinen on the anchor leg. DU’s final time was 3:17.22, also under the old NCAC record set last year by Kenyon (3:17.82). Wabash turned in a third place effort, rounding out the top three with a 3:25.91.

For the women’s meet, the Ladies didn’t let a rocky start in the 200 freestyle relay deter them. The Denison squad led by freshman standout Carolyn Kane joined by Ashley Yearwood, Claire Van Fossen and senior Natalie Lugg posted a 1:32.93 to claim the victory in the relay, breaking the pool record (1:35.56, set by Kenyon in prelims) in the process. Yearwood edged awfully close to posting a 22 on her split – she was a 23.01 with a .22 reaction time. The Kenyon Ladies’s second place relay finished in 1:33.06, follwed by DePauw in third at 1:36.30.

Records kept falling in the women’s 500. DePauw freshman Angela Newlon grabbed everyone’s attention in prelims by posting a 4:53.77; in finals, she rocketed out to an early lead and held her ground the whole race to finish with a new NCAC record of 4:50.91. The old record of 4:51.18 belonged to Hillary Callen (Denison). Coming in second, also under the pool record established earlier in the day by Newlon, was DU’s Campbell Costley. Costley posted a 4:53.18 to run down and outtouch Kenyon’s Mariah Williamson for the runner up spot. Williamson finished in third with a 4:53.25 – a lifetime best and a new Kenyon varsity record. (The old record also belonged to Williamson, and was set at NCAAs last year.) In the B final, DePauw’s Jennifer Norehad dropped four seconds to win the heat, putting up a time that would have been 9th in the A final (5:09.25).

The top heat of the women’s 200 IM was nothing but Red and Purple. DU’s Lugg destroyed everyone on the breaststroke leg, cruising with a 34.2 split, over a second faster than anyone else. (In most cases, closer to three or four seconds faster.) Lugg finished in a 2:03.06 to crack the NCAC record set last year by teammate Michelle Howell at 2:04.02. Defending champion Howell finished second with a 2:06.18. Kenyon’s Hillary Yarosh rounded out the top three with her 2:06.62.

The women’s 50 freestyle was the first NCAC title for Kenyon. Jourdan Cline sprinted her way to victory with a 23.41. That’s a little shy of the pool record, which belongs to DU’s Kane. Kane was second, touching just a tenth behind Cline in 23.51. She was followed by teammate Nuess (23.67). Kenyon also boasted victory in the consolation finals – Hannah Lobb dropped to 24.09 to take the B final. The Ladies had five in the consolation final as well as three women in the A final; depth seems to be playing a major role in their strategy at this year’s NCACs.

NCAA champion Maria Zarka showed up on the boards in a big way for the Ladies at NCACs this year as well. After finishing in second place last year, Zarka returned with a vengeance, cracking the pool record (37.50 set by Carolyn Eckendorf of Grove City this year) with 456.65. This is the first time a Lady has won a diving event since Becky White did so in 1998. Allegheny’s Emily Capone was also under the pool record posting a 385.15. She was joined in the top nine by three other diving teammates, who have already helped to bolster Allegheny’s point total, pushing them to fourth in the overall standings.  Third place went to Denison’s Carrie Bookheimer (358.00).

The final event of the night was the 400 medley relay. NCAA champion in the 100 backstroke Celia Oberholzer led off the victorious relay with a 55.57 (she was 55.1 in prelims). Katie Kaestner posted a 1:02.0 on her leg of the relay (which, considering her .37 reaction time, is pretty darn quick). Natalie Parker was a 56.10 on her butterfly leg, and Haley Townsend finished up the job with a 51.14. With exception of the anchor leg (beat by DePauw’s Caroline Bridges in 51.09), all those splits were the fastest across the field, adding up to a 3:44.88 – crushing the pool record the team set in prelims. This is the third year running in which Kenyon has won this particular event. Following in second place was Denison’s quartet in 3:47.42. DePauw was third (3:54.01).

Prelims begin tomorrow morning at 10 am EST, followed by finals beginning at 6:30 pm. Click here for live video and here for live results.

Time trials results are available on Meet Mobile. 4 guys broke 4:40 in the 500 Free on Thursday Night.

Maciel, Rich, Howes and Wuorinen swam the Denison 200 free relay in prelims; in finals it was Fleming, Wuorinen, Rosenburg and Maciel.

Whoops – thanks for catching that. Updated accordingly.