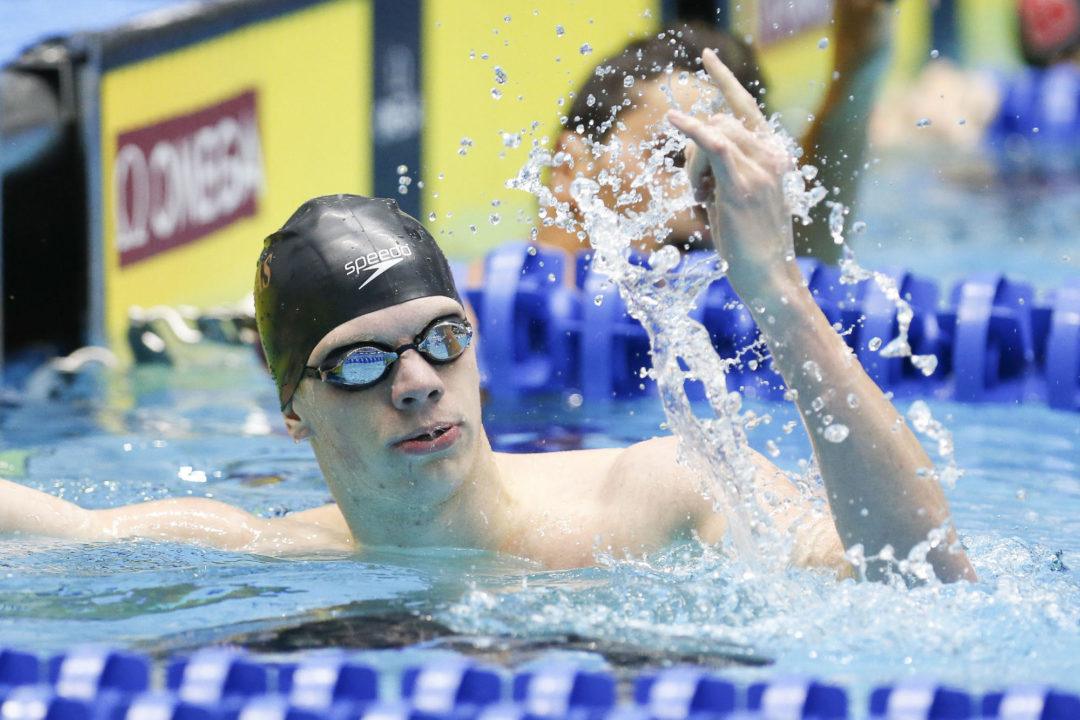 The NCAA has released its official psych sheets for the men's NCAA Championships, including the cut lines for each event. Archive photo via Tim Binning/TheSwimPictures.com

The NCAA has released its official psych sheets for the men’s NCAA Championships, including the cut lines for each event. You can see the full cut psych sheets here.

The cutline fell exactly where we projected it to go, with all of line 28 making the show along with a handful of swimmers in line 29. The alternates are as predicted, led by Grand Canyon duo Daniil Antipov (200 fly) and Youssef El-Kamash (100 breast).

A refresher on how that process works: The NCAA will go through, event by event, and add one swimmer to each, until a certain “line” (aka, all 30th-ranked swimmers) puts the field over the maximum 235 individual entries (270 total minus 35 places for divers). At that point, swimmers will be invited based on who is the closest to the NCAA Championship Record in their event from the next line (in this case, line 29). If you want to look at the full procedure, check section 2.4 of the NCAA Pre Championship Manual. Once a swimmer is invited in an individual event, they can swim up to 2 other events in which they have “B” cuts.

Cal leads the qualifiers with 17 individuals, and they’ll add at least one diver, with Connor Callahan qualifying out of Zones this week. Texas and Stanford have 15 swimmers apiece, and have both qualified divers as well – 3 for Texas and 2 for Stanford. Divers count as half a roster spot, with each team holding a roster limit of 18 for the NCAA meet.

Number of Invited Swimmers By School

Cameron Craig going for the 5 relays!

Man – what happened to Wisconsin? They’ve really fallen off the map of late. Beata is the only bright spot.

Lots of graduations and transfers. This year’s junior class of men started with 10 or 11 and now has 4.

Started with 6 swimmers, now have 4 swimmer? Where’d you get 11

they had a great coach but then fired him.

Which coach are you talking about, Gator?

Wow that’s crazy. New pool, but Hite and coaches need to gain some momentum before then.

Ever since the DERS

WAIT so is John shebat out of the 2back???

No, he’s swimming it. The fact that he is below the invite line means that he wasn’t one of the people who got invited for it, but that he has entered it as he was already invited and had the b cut.

Thank you for the clarification

Any way to get more tickets? Doesn’t make sense to have this small of a venue for such a big meet…. My son is swimming and we aren’t even able to get tickets

Anonymous – teams usually get the first shot at tickets. I don’t know what team your son swims for, but did you talk to whoever is coordinating that? Would be surprising to me if it’s already sold out. Maybe they’re just not on sale yet? We’ll ask.

Braden – I was at the pool last weekend for the MN High School State, and overheard the D1 Championship has been sold out.

Yep – just confirmed that. Crazy to think of.

Good or bad for our sport?? Feel especially bad for those age group swimmers who want to but can’t watch THE fastest SCY meet.

in the future parents should be given a fair amount of time to get their tickets before they go to the public. The age group swimmers will get over it, parents should be able to watch their kids at a meet of this magnitude.

While I agree with you, Parents don’t need to watch their kids when their kids are 21,22,23 years old at a swim meet. Yes I understand this is the last swim meet for many of the swimmers but maybe you go to your senior meet instead?

I know it stinks but your kid wont think you love them any less and isn’t college athletics really about the kids rather than the parents?

Yeah the parents who drove them to practice for years, paid for swim team, spend endless hours volunteering/traveling/sitting for swimming, why would they want to watch their kid at the biggest stage?

Do you have children?

Each person that made the cut in an event for NCAAs is given two complimentary tickets fro friends/family (at least that’s what is done at Texas). The schools can request additional tickets for their section as space allows. That ensures that parents can attend. In the past, a couple of dozen additional seats are available. These seats above the original two need to be purchased for $85 each.

Good for the meet. Swimming in a packed house is awesome as a college swimmer. No more IUPUI please.

Why would you not want to be at the Nat? Even if “only” 2,000 fans showed up, they would be packed on both sides of the 25 yd competition pool – and it is loud! Just ask the Indiana high school swimmers who competed in the IHSAA state meets in February. The Nat isn’t packed to capacity, but it is very loud and FAST.

Swimmers’ parents can get tickets but maybe your school didn’t order them or enough of them?

Okay, is his name Townley or Francis? When he breaks 1:30 this year at NCAAs I want to make sure I get the name right! 😉

Very exciting for our sport to have Dean Farris. I am pulling for him over all comers in the 200 free. Think he can final in the 50 and finish top 3 in the 100.

The 200 free is going to be one of the most exciting races.

Haas tends to start slower and then build up to a fast finish. That’s how he won last year.

Dean Farris is big and tall like Townley, with a powerful stroke.

Blake Pieroni will be absolutely flying, with a full taper and his beard shaved.

I’d say Townley’s typical strategy is to start fast and try to keep it up..

16
0
Reply
JP input is too short
Reply to  Caleb

Yeah, I even think I recall him saying in an interview that going out ahead and holding on was his 200 tactics.

“Haas tends to start slower”… what planet are you on? He owns the top 2 times in history, going out in 43.61 and 43.74 respectively… name someone who has been out faster than that!

I think it only seems like he starts slow because his start and underwaters are much slower than anyone around him. He is arguably the fastest on top of the water swimmer on the planet in the 200 free. He was out in 20 when he broke the record in 2016 which is not exactly a “slow start”

he’s not swimming the 100 but he should final in the 200 back, maybe medal if he can go faster than at Ivies.

I have a feeling Haas will get upset in the 200.

I think just the opposite. Considering the way Haas has historically tapered, we may be in for something special.

Even if he’s a slight favorite (or is it Pieroni?) I would pick “The Field” vs. Haas. Close race, at least 4 guys with a realistic shot to win. Like the backstrokes or 500 free, except record-setting.

Regardless of who wins, they won’t beat Caeleb’s lead-off split in the 4×200.

I was gonna say, as a full and uncompromising Texas fan, the only swimmer who I would pick over Townley in the 200 is Caeleb.

That doesn’t mean Peironi or God-Emperor Dean shouldn’t even bother racing. They are certainly capable of throwing down a time that could challenge for the win, but I’d only pick Dressel over Haas head to head.

So what relay does he sit out if he swims the 800?

Based off of my calculations, and assuming there will be no scratches, Arizona will be swimming right next to UVA in the first heat of the first event Wednesday night in the 800 free relay. Interesting. Very interesting actually. Can anyone think of a more entertaining way to start this meet? me thinks not. #desorboeffect #buscheffect

Putting the 4 x 200 Free relay on the first night / at the start of the meet was a brilliant idea. Glad it is being maintained.

whats going on with penn state. No qualifiers.

One diver qualified for the men. Look at their roster: One senior, 11 Freshmen. Lots of great swims by freshmen at B1Gs, with some new B cuts, but no one quite there yet. If they can keep them around for 4 years and they continue to improve like this year (big ask), they could be a much stronger team in a few years time. If they aren’t able to keep them around and improving, it could just be more of the same in the future.