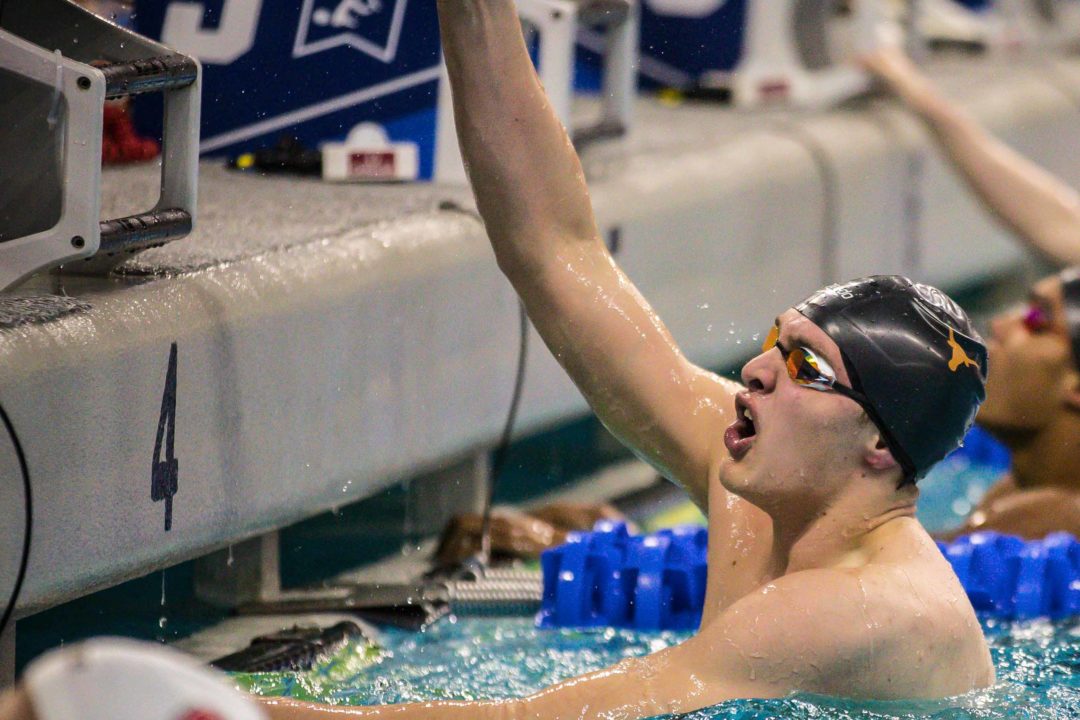 It's only December 15th, but the Texas men are already projected over the NCAA roster cap with 21 likely qualifiers based on last year's invite times. Archive photo via Jack Spitser/Spitser Photography

It’s only December 15th, but the Texas men are already projected over the NCAA roster cap with 21 likely qualifiers.

That’s based on times swum this season that are under the times it took to earn an NCAA invite last year.

The Texas men had 24 swimmers earn times that would have qualified them for NCAAs last year. But the NCAA roster cap of 18 forced the Longhorns to leave a number of those guys off the roster to fit in four likely scoring divers and get under the cap. It looks like they’ll have a very similar conundrum this year, with 21 swimmers already hitting the 2020 invite time in swims so far this fall.

The NCAA selection process is a bit complex. The most-simplified version is that athletes who hit “A” cuts are automatically qualified for the meet. They can also add second and third events where they have “B” cuts.

The remaining “B” cuts are slowly added to the NCAA invite list based on national ranks as of March. Last year, the top 29 men and top 37 women were invited in each event, and the cut lines usually hover in those general areas. We also track “invite times” each year – those are the times of the last swimmer in each event to earn an NCAA invite.

Invite times tend to get gradually faster each year, though they’ll occasionally get a tick slower in a given event. Comparing this year’s national ranks to last year’s invite times gives us a rough idea of which swimmers are in decent shape to earn NCAA invites even if they don’t better their current season-bests.

Note: last year’s NCAA invites were already locked in before the coronavirus pandemic started canceling meets and disrupting practices. So the listed invite times were not affected in any way by the pandemic.

Note: these are all according to the current NCAA event rank database. If there’s a time missing (or a time from a non-collegiate athlete included), make a note in the comment section and we’ll work to verify it.

*Weyant appears in the NCAA database for the moment, though we’ve previously reported that she’s expected to defer her enrollment and not compete for UVA this season.

The Virginia women are gearing up for a run at their first-ever NCAA swimming & diving title. They look to have the arsenal to do it, with a dozen swimmers projected to earn invites at this point.

It’s worth noting, of course, that these rankings are heavily skewed towards the ACC and SEC, where meets have been more common in this pandemic-adjusted season. The Big Ten and Pac-12 have competed only sparingly, and should really re-shuffle these ranks as they return to a more full competition schedule.

For the Texas men, the situation is remarkably similar to last year. The raw qualifier numbers are incredible – it’s only somewhat rare to see a team over the 18-person cap, but to be as far over as Texas is at this point is extremely rare.

On the other hand, the issue for the Longhorns last year was that they had too many single-event scorers projected, where Cal’s smaller group were ultimately seeded to outscore Texas because more Cal swimmers were projected to score in multiple events. Texas also has a lot of guys just barely under the invite times, but well behind the times it typically takes to score at the NCAA meet.

And just as we noted with the women, these ranks really favor the SEC, ACC, and Big 12 right now, because those conferences have competed more. The Big Ten and Pac-12 have slightly stricter rules on practice and competition during the pandemic, so we’d expect those conferences to add a lot more qualifiers closer to the NCAA meet.

You’re probably right – he appears that way in the NCAA database right now. We’ve updated it in this draft, though!

I thought Emma Weyant was taking a gap year?

Emma Weyant is not at UVA yet (unless there’s been a change of plans and she’s coming for 2nd semester??)