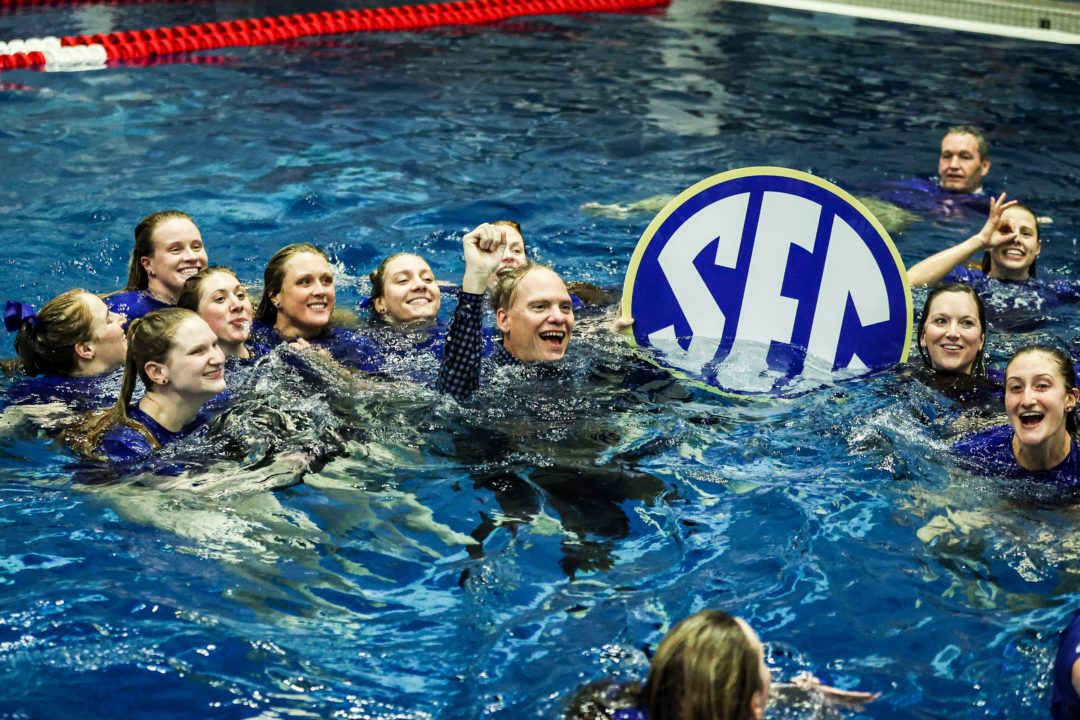 The first week of NCAA Division I conference meets are in the books, so let's take a look at what happened in which conferences last week. Current photo via SEC

The first week of NCAA Division I conference meets are in the books, so let’s take a look at what happened in which conferences last week. Below, you’ll find the final scores and a brief overview of each conference meet from last week. Last week was host to the women’s ACC, women’s SEC, women’s Mountain West, women’s WAC, and men’s and women’s MPSF Championships.

Virginia won their 3rd consecutive Women’s ACC title this past weekend, pulling away from NC State as the meet progressed. UVA also had the highest scoring class of the meet, which were their sophomores, scoring 405 points. Louisville’s freshmen were the next highest-scoring class, coming in at 382 points. UVA swept the relays, breaking 2 ACC records, and 3 meet records.

Virginia sophomore Ella Nelson broke the ACC record in the 400 IM, while NC State junior Sophie Hansson broke the conference record in the 100 breast. There were also several NCAA-leading times posted at the meet. UVA’s Kate Douglass swam the fastest 100 free in the country, Paige Madden clocked the top 1650, and Ella Nelson‘s 400 IM was also the fastest in the NCAA this year. UVA also holds the fastest time in the NCAA in all 5 relays as we head into the 2nd week of conference championships.

The Women’s SEC Championships were held this past week, with the Kentucky Wildcats winning their first-ever SEC team title. Kentucky was in the race for the SEC crown throughout the meet, but it became evident following a phenomenal team performance at Saturday’s prelims session that the Wildcats were in the driver’s seat in the team standings.

Alabama’s Rhyan White had an excellent meet, winning the Swimmer of the Meet award for her efforts. White won the 100 back, 200 back, and 100 fly, making her one of two swimmers to win three events at the meet. UGA’s Zoie Hartman was the other, as she won the 200 IM, 100 breast, and 200 breast. As the leading individual scorers at the meet, White and Hartman shared the Commissioner’s Trophy this year.

The 2020 Mountain West Women’s Swimming & Diving Championships were a swimming fan’s dream, featuring one of the most highly-contested conference meets in recent memory. Two-time defending champions San Diego State, who won the 2020 champs with a record-breaking score, were in a knock down, drag out battle with UNLV and Nevada from start to finish. The meet came down to a point where UNLV was leading Nevada by a single point heading into the 400 free relay. UNLV anchor Kristina Schneider channeled Jason Lezak on the final 25 of the race, impossibly chasing down Nevada and San Diego State, and touching the wall .10 seconds ahead of Nevada, and .11 seconds ahead of SDSU.

San Diego State’s Klara Thormalm had probably the best individual race of the meet, likely earning herself an NCAA invite in the 100 breast.

Team Scores (Through All Swimming Events)

The 2021 WAC Women’s Championships began last week, including the start and finish of the swimming events. The 3 diving events are set to be held starting this Thursday, in a separate location. That being said, the meet has not yet been decided, though it’s looking increasingly likely Northern Arizona will win the meet. We can say that confidently because NAU leads New Mexico State heading into the diving portion of the championships, and NAU has 5 divers to NMSU’s 1.

It should also be noted that Grand Canyon was dealing with athletes missing due to COVID-19 issues. They had hung around with a very tight top 4 team race through the first few days of the meet, but fell in the standings towards the end. There were also excellent showings by freshmen at this year’s meet, winning 3 of the 16 individual events, and contributing many more top 3 finishes.

BYU won the Men’s MPSF Championships handily this past week, ending a 2-year run by Hawaii. The meet was very close up until the final day, when BYU opened up severely outscored Hawaii. Hawaii, on the other hand, pulled out a win a bit of a closer finish at the Women’s Championship. The title marks the Rainbow Warrior’s 5th-straight.

Though the women’s meet was already decided coming into the final event, it still ended with a bang, where BYU won by .01 seconds over Hawaii.

Anyone know why collegeswimming hasn’t updated their top times lists? Do we think invite times are going to skew a little slower this year?

Anybody else notice that Kentucky ladies were blowing their lifetime bests by multiple seconds, while the other teams were swimming season bests, if at all, by small fractions?