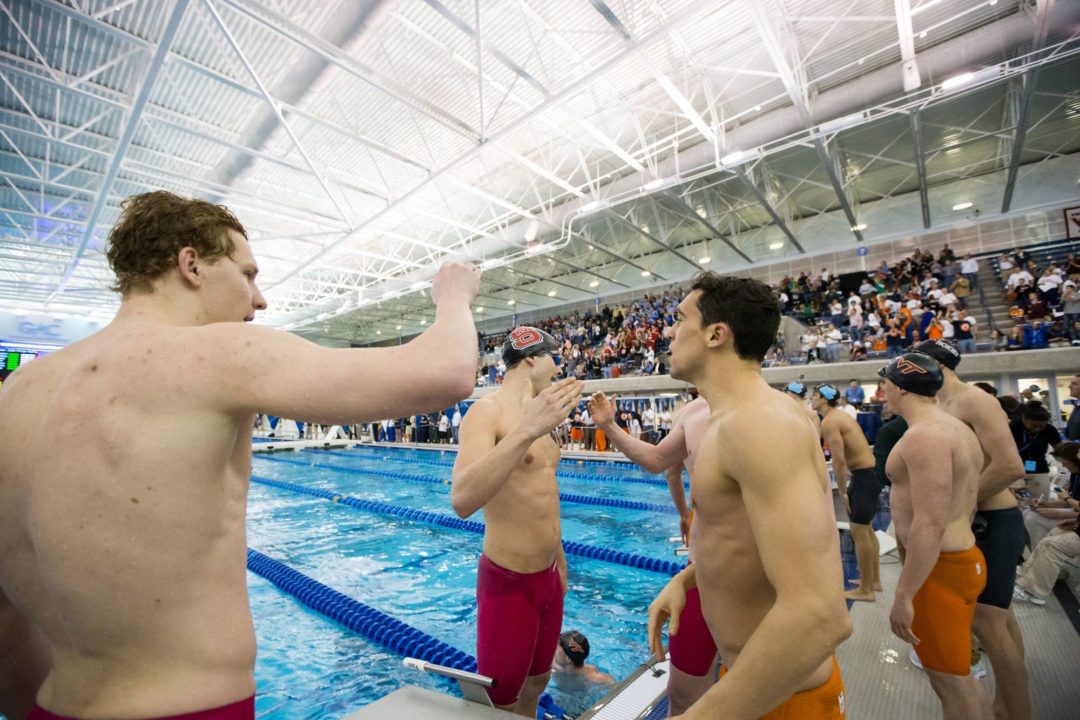 The North Carolina State men came from behind to steal the Nike Cup title from the host UNC Tar Heels Saturday night, led by a dominating 400 free relay win.

On the women’s side, the Tennessee Volunteers continued a dominant run, earning 4 wins in 6 events to take home the team title.

While the team battle mostly pitted the two North Carolina programs against one another, Tennessee made things interesting early on by going 1-2 in the 1650 free. Evan Pinion led the way in 14:42.04, a great time that was actually faster than U.S. Olympian Connor Jaeger went in winning the Minneapolis Grand Prix across the country.

David Heron was second in 14:57.94, and NC State’s dominant distance addition Anton Ipsen was 15:04.71 for third. The distance event really stung North Carolina – the Heels entered the event with a points lead but their best finisher was just 12th place overall.

The 200 back was another great Tennessee event. Sean Lehane picked up the win in 1:41.83, which should put him near the top of the NCAA this season (he would be easily number 1 prior to this weekend, but results from the rest of the college invites across the country haven’t all been added to the NCAA rankings yet. Jimmy Dagley was third for Tennessee, which earned big points even though star freshman Sam McHugh scratched out.

The 200 breast was set up to be a showdown between East Carolina’s Rokas Cepulis and Duke’s Peter Kropp, but Cepulis claimed the event when Kropp was disqualified. Cepulis was 1:55.88 to win by four seconds over the next-fastest competitor.

The Wolfpack dominated the final relay, going 2:53.80 to win by well over two seconds. That time should rank near the top of the NCAA and saw outstanding splits all-around. Freshman Ryan Held led off in 43.98 before Bilis popped a 42.86 split on the second leg. Andreas Schiellerup (43.35) and David Williams (43.61) were also big-time contributors on that relay team.

Tennessee opened with 4 wins in a row to pad what was already a comfortable team lead on the women’s side. First, Morgan Dickson led a 1-2 finish in the 1650 free. Dickson was 16:12.44 with teammate Madeline Tegner second at 16:17.38. Third went to UNC’s Emma Nunn.

Next was the 200 back, where Amanda Carner held onto her top seed for the Vols. Carner was 1:55.75, outpacing NC State’s Alexia Zevnik by about four tenths.

Faith Johnson dropped one of the more impressive swims of the night in the 100 free, going 48.58 for the title. On a weekend where Simone Manuel was doing Simone Manuel things in Texas, swimming fans might be a bit desensitized to just how fast a 48.5 mid-season is, but its worth nothing that prior to this weekend, Johnson’s time would have ranked her 2nd in the nation and well ahead of third place.

Second in that race went to NC State’s Riki Bonnema at 49.41.

The final win of the Tennessee run came in the 200 breast, where Molly Hannis was all but untouchable. The senior went 2:07.09, blowing away the field by seven full seconds for a dominating win.

Then NC State won the women’s 400 free relay, sweeping that relay in both genders. The team of Alexia Zevnik, Ashlyn Koletic, Krista Duffield and Riki Bonnema went 3:18.15 to just touch out Tennessee’s 3:18.35. Bonnema split 48.59, holding off a charging Faith Johnson (47.82 split) for the win. Koletic and Duffield were each 49s on the relay for the Wolfpack.

Things were pretty spread out by the end of the women’s meet point-wise. Tennessee crushed the field with 2059 points, and UNC and NC State were distant 2nd- and 3rd-place finishers.