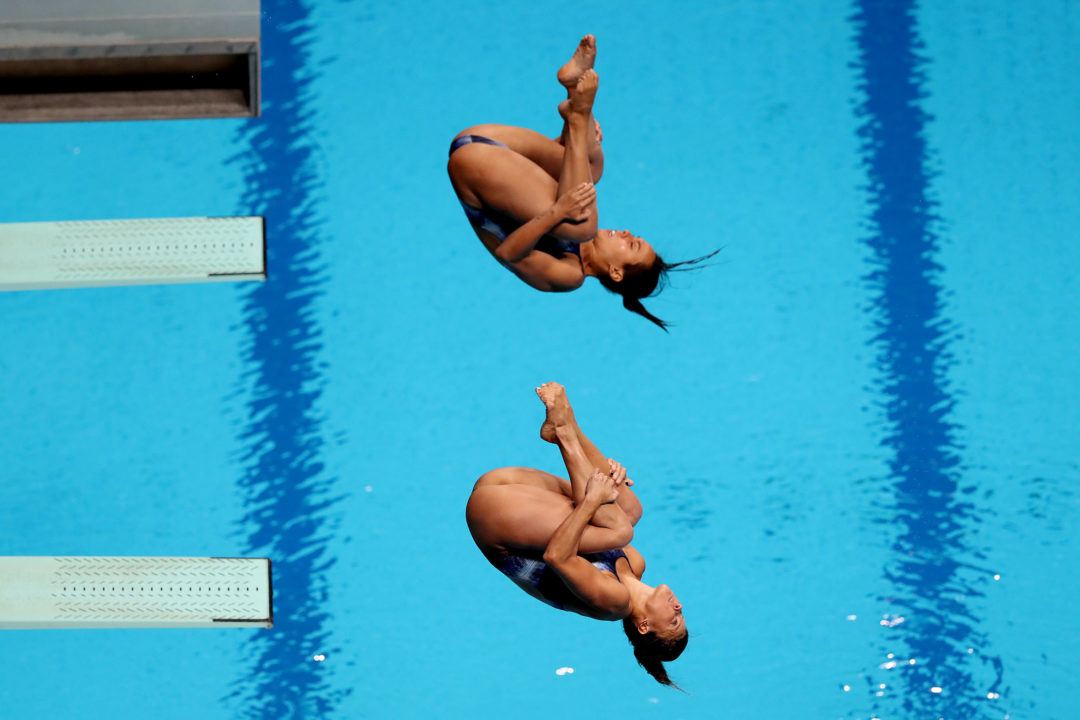 Beginning Monday, June 1, The Olympic Channel will host a week of replays of diving events at the 2019 World Aquatics Championships. Stock photo via Satiro Sodré/SSPress/CBDA

After last week’s Swimming World Championship Week on NBC Sports highlighted pool racing from the 2019 FINA World Aquatics Championships in Gwangju, China, this week the network will turn its attention to another aquatic sport: diving.

NBC Sports will feature almost 40 hours of action from the 2019 World Diving Championships on sister network the Olympic Channel. This will include both traditional pool diving and the high diving events.

The week will begin with nightly coverage of varying events, with a focus on American divers, before a marathon of all of the meet’s diving coverage on Sunday, June 7.

Sarah Bacon became the first U.S. woman since 2005 to win an individual diving medal at an Olympics or world championships when she won a silver medal in the 1-meter springboard final. The last American woman to win an individual world championship medal was Laura Wilkinson, who claimed gold on platform in 2005, while the last U.S. woman to finish on the podium in the 1-meter springboard was Wendy Lucero, who won silver in 1991.

Other notable performances from the U.S. include: Olivia Rosendahl and Zach Cooper with a fifth-place finish in the mixed synchronized platform final; and 2016 Olympic silver medalist Michael Hixon and Andrew Capobianco finishing eighth in the men’s synchronized springboard final.

Murphy Bromberg and 2016 Olympian Katrina Young won bronze in the women’s synchronized platform, securing the U.S. a quota spot in the event for the Tokyo Olympics. Bromberg and Young came from behind to finish with 304.86 points, edging the Canadian pair of Meaghan Benfeito and Caeli McKay for a spot on the podium. This also marked the first time since 2009 that the U.S. women have won a world championship medal in the women’s synchronized platform event.

Other U.S. performances for the night include: Briadam Herrera’s sixth-place finish in the men’s 1-meter springboard and Alison Gibson and Krysta Palmer finishing 10th overall in the women’s synchronized springboard final.

2016 Olympian Katrina Young and Andrew Capobianco won bronze in the mixed team event. This marked the second consecutive world championships the U.S. has won a medal in this event, with Krysta Palmer and David Dinsmore also placing third two years ago in Budapest, Hungary.

After taking a break from the sport following a concussion in early 2018, four-time Olympic medalist David Boudia made the switch from platform to 3-meter springboard. All five of Boudia’s world medals come from platform events. The 2019 World Championships marked Boudia’s first real test in his new event, where he finished fifth. American Michael Hixon also finished seventh overall.

In the women’s high diving final, Genevieve Bradley led the U.S. with a fourth-place finish, while Ellie Smart was 10th overall.

An all-day marathon of the 2019 World Diving Championships begins next Sunday, June 7, with encore presentations of all six days of finals competition. Nearly 20 hours of coverage begins at 6:30 a.m. ET on Olympic Channel: Home of Team USA.