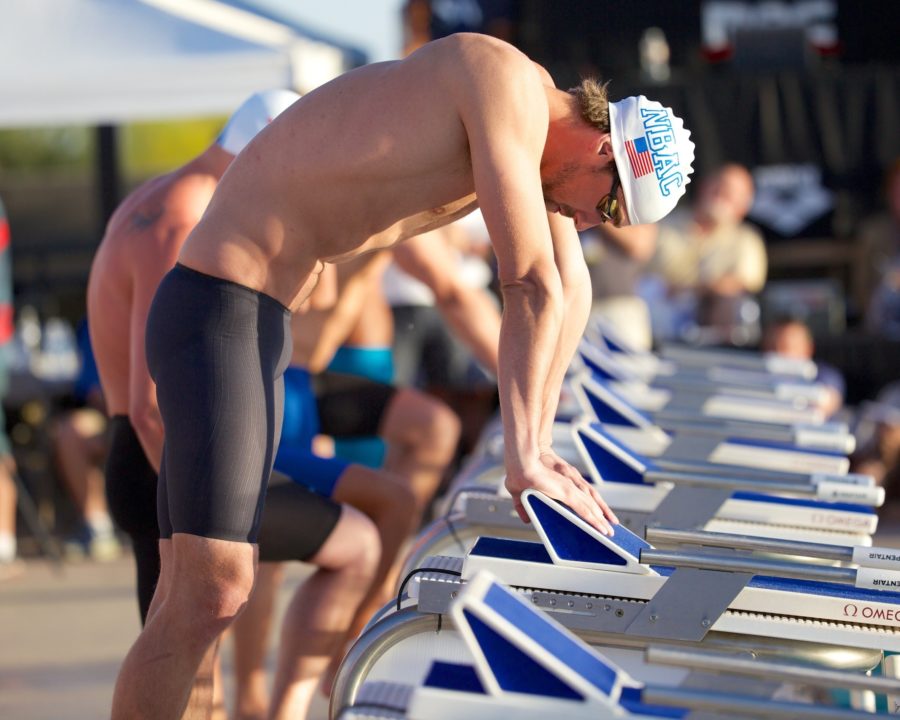 Michael Phelps will be swimming two races at his second meet back from retirement in Charlotte, and will be joined by the bulk of his NBAC teammates. Current photo via Rafael Domeyko

Note: unlike the version posted earlier in this week, this edition of the psych sheet is from USA Swimming and has been deemed “official”.

The official psych sheets for the 2014 Charlotte Grand Prix have been released, and the meet will have a typically-loaded field.

This meet is best-known as Michael Phelps’ second back from his 18-month retirement, and as his coach Bob Bowman said earlier this week, he is entered in the 200 free and the 100 fly. In the 200 free, he’s seeded 14th in 1:49.09, and will face a field that includes training partner, and the world’s best of-the-moment 200 freestyler, Yannick Agnel, as well as Ryan Lochte, Conor Dwyer, Conor Jaeger, Mitch D’Arigo, and Sebastian Rousseau.

Phelps is then seeded 4th in the 100 fly in 52.13, behind Lochte, Eugene Godsoe, and Tim Phillips. Other big names in that race include Albert Subirats, Joe Schooling, Matthew Josa, and Thiago Pereira.

As for Lochte, the other star of American men’s swimming, he’ll be racing this Charlotte Grand Prix for the first time as a member of the home-team SwimMAC Carolina. He’s got a big schedule, and while we’ll wait to see which of these races he’ll actually swim, his entries are in the 200 free and 100 fly, right alongside Phelps; the 400 IM, the 100 back, the 200 IM, the 200 back, and the 100 free. If he swam all of those races, especially if he swam the 400 IM which he’s basically given up at the international level, that would be the most significant lineup of this meet, but don’t count on it.

There will be a huge contingent of international swimmers at this meet as well. Thiago Pereira, Olympic silver medalist, is entered in 6 races including his two best: the 200 IM and the 400 IM. That 200 IM should be a good race with he, Lochte, Dwyer, and Chase Kalisz, among others.

Kalisz was entered in the Mesa Grand Prix before he wound up as a no-show, but the two-time defending NCAA Champion in the 400 IM has confirmed to us that he will race in Charlotte, which is much closer to home for him. He had a very good freshman year at Georgia, but his sophomore year this past season is one of the best seasons we’ve ever seen by an NCAA sophomore on the men’s side, including breaking the U.S. Open Record in the 400 IM by a second-and-a-half.

The collegiate ranks are really ready to tear into their long course season at this meet, with swimmers like Connor Jaeger, who recently completed his eligibility at Michigan. He’s entered in the 100-1500 frees, along with the 400 IM and the 100 fly.

Also here will be Elizabeth Beisel, Cammile Adams, Amber McDermott and Shannon Vreeland. The University of Florida is sending a big roster as well.

Agnel from France will be there, Friis from Denmark will be there, and Pawel Werner, among others will be there internationally. Great Britain has sent a squad that includes Christopher Steeples, Rebecca Guy, Jessica Lloyd, Charlie Boldison, Jonathan Carlisle, and World Record relay organizer Lewis Coleman.

This meet, a four-day meet, runs Thursday through Sunday at the Mecklenburg Aquatic Center.

Curious to see Lochte in the 400 IM. I believed he was done with that event. Good luck against Mr Kalisz!

I’m hoping Phelps picks the 200 free over the 100 fly, if he has to choose between the two. I’m really curious to see where he is in that.

would love to see Phelps swims both events in the finals…and yeah, it will be interesting to see him & Yannick agnel racing each other in 200 free.
and if Phelps wanted to swim 200 free at the Olympics… i wonder “who is it” that BoBo Gigi’s gonna root for??? lol hahaa

Thanks Bobo; always good to hear about Dagny whether she’s swimming or not. She’s got a great attitude and I’m glad to see that she’s found her niche.

The meet looks huge. I guess when USA swimming says the meet will be capped at 600 swimmers they don’t mean it.