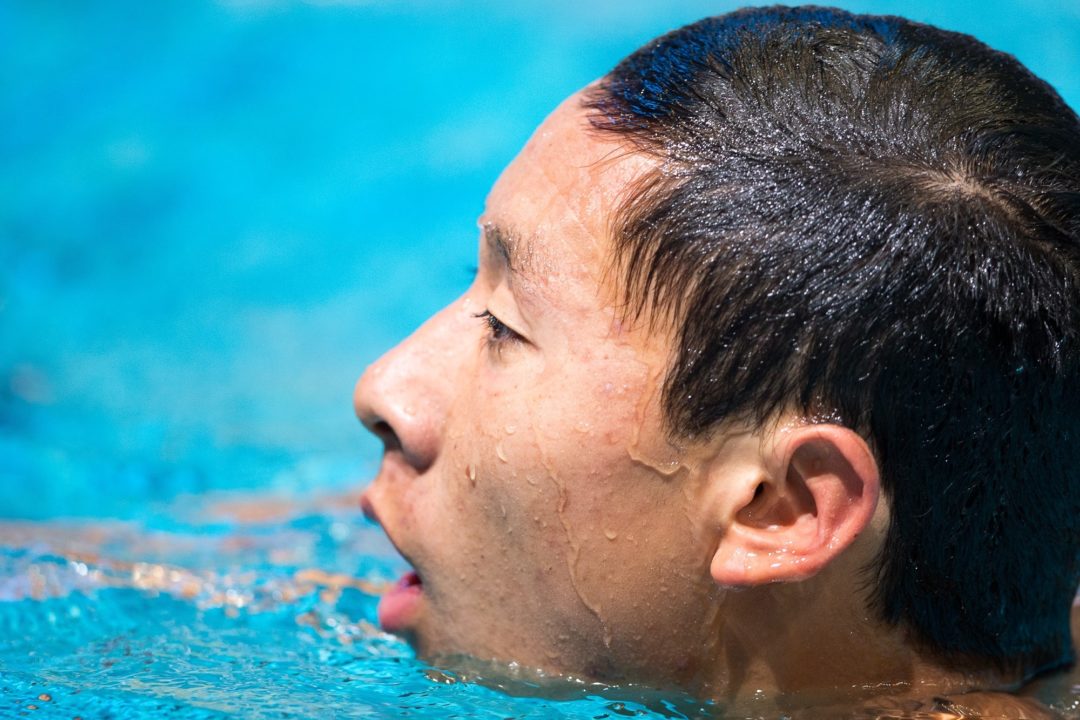 University High's Corey Okubo led his team to a League Championship on Friday; with the depth the Trojans showed off, a Section title could be in their sights as well. Archive photo via Tim Binning/TheSwimPictures.com

In one of the true juggernaut leagues in California’s Southern Section, the Pacific Coast High School League Championships saw two of the state’s top high school programs square off on Friday. On the boys’s side, it was the 4th-place team from last year’s Section Championship meet (Division I – big schools) from Irvine’s University High who won, while last year’s section runners-up from Corona del Mar finished just 3rd in the league.

On the girls’ side, the Corona del Mar squad won their first league title since 2006, placing just ahead of Irvine and Irvine-University High.

The star for a deep University High team that could contend for the section title this year is senior Corey Okubo, a Princeton commit.

He took a pair of titles at the meet, beginning with an outstanding 1:46.87 in the 200 yard IM. That already puts him among the top 15 high school boys in the country so far this season (with California high school meets mostly wrapping up the yards season), and he still has his biggest meet yet to come.

That’s Okubo’s fourth-straight league title in the 200 IM. He went out in nearly an identical split as last season on his primary stroke, the fly, but his resulting time was a second-and-a-half better, thanks in large part to a much improved breaststroke split (31.33).

Okubo would follow that with a 48.69 in the 100 fly, which was more on par with what we saw from him last season at this meet, but still gave him a second-straight title in this event.

The runner-up in the 200 IM was Okubo’s teammate Ken Takahashi in 1:50.31, and he would later go on to win the 500 free in 4:27.31. The University boys, with Daniel Tran placing 3rd, took the top three spots in that 200 IM. Early in the meet, that was a stark demonstration of just how deep this team is this year.

While the Corona del Mar team was outmatched at this meet on numbers, they should still place highly at the Southern Section Championships. That’s in part on the strength of another Princeton commit, senior Liam Karas.

Karas took home a pair of titles of his own, starting the day with a 1:39.54 in the 200 free and finishing with a 46.07 in the 100 free. His best success to this point of his career has been in the sprint freestyles, breaststrokes, and IM’s; however, that 200 free was under his lifetime best by almost a second-and-a-half, showing good development in his final season before heading off to the Ivy League.

That 200 free swim was also a Meet Record for Karas. He and Okubo avoided each other at this meet, but the future college teammates went 1-2 in the 200 IM at the CIFSS Division I Championships last season, separated by less than three tenths. With both swimming extremely well, that could be the best race we’ll see at the section championship.

Anchored by 50 free individual champion William Hofstadter, who split a 20.51 on this relay (an even better swim than his 21.12 win in the individual), University took the men’s 200 free relay with a 1:25.51. All four swimmers were 21.7 or better on this relay, though it wasn’t really until Hofstadter’s fantastic anchor that they broke this race open ahead of runners-up Woodbridge (1:27.39).

University High junior Daniel Tran came in as a heavily-favored top seed in the men’s 100 abckstroke, and he held that position well. Tran was the only swimmer to crack 50 seconds, going a 49.87 for the win ahead of Northwood’s Jason Rodriguez (51.24).

Corona del Mar took a shot back in the final individual race of the night, with another impressive junior, Tyler Lin, touching for the title in 56.20. This was a very fast league race, with the top 6 all breaking a minute, including four University swimmers (behind Lin and Northwood’s William Monjay in 56.73).

On the girls’ side of the meet, a nail0biter that came down to the final few races, there were standouts for both Irvine High and Carona del Mar. At the end of the day, though, it was the CdM combo of Stephanie Samudro and Meagen Popp who took their team to the title. They won two individual events apiece, and shared Swimmer of the Meet honors with Emily Jiang from University.

Popp won the 500 free in 4:53.16 and followed that with a 100 back title in 58.45. The junior is primarily a breaststroker and IM’er, but at this meet she swam the races that her team needed from to win, especially in that backstroke. The 100 back comes right before the 100 breast, but Corona del Mar knew that they had the league’s top two 100 breaststrokers, so they opted to take their chances on getting extra points from another event victory, and it paid off.

That alluded-to ‘other’ breaststroker is Samudro, who won the race in 1:03.46 ahead of Beckman’s Natalie Manders (1:05.18). She preceded that here with a victory in the 100 fly in 55.59, as the versatility of these two swimmers is what really carried this team to the title.

Samudro transferred in to CdM as a junior last year from San Marino, and in the process has gone a perfect four-for-four in individual events at the PCL Championships. She’s a UNLV commit, and has rare versatility; she could fill about any spot on the Rebels’ medley relays next season aside from maybe the backstroke.

Popp, a junior, is also a transfer from Illinois, and so she might catch a lot of folks off-guard when she shows up at the CIFSS Division I Championship meet. Swimmers are allowed to change events between their League and Section meets, if they’ve met the time standards during the regular season, so if Popp shows up in the 200 IM or the 100 breast in two weeks, she could do some damage.

Irvine’s biggest successes came from Emily Jiang, a senior and yet another Princeton commit at this meet. She won both the 100 free (52.10) and 200 free (1:51.02). Those are both best times for her during the high school season, though neither is close to her career bests (or as fast as she was at this meet last season).

That did, however, make a third-straight league title in the 200 free, with only a runner-up finish as a sophomore blemishing her perfect run.

Still yards in May! 🙄
The long course season is very short for these young swimmers.
Why so late?
I asked the question last year and someone answered me it was because there weren’t indoor pools in California. Ok. I understand the high schoolers swim outdoor but why not earlier in the season. Championships in March for example. Weather is good all year in California. No? 🙂

Talking about Okubo, I’ve seen he swam recently in a long course meet like other well known names from California like Abbey Weitzeil or Ella Eastin. So, unlike what I said above, the long course season isn’t so short for them. It looks like they mix yards and long course in April and May.

I live in the SanFrancisco Bay Area and March is usually a very rainy month (but, obviously, not this year) plus there are other reasons for swimming in May. Southern California has warmer weather but also swims around May.

You may of heard that FINALLY we will be having a California State Championship for the vast number of divisions in the state. You may know that California’s population is now pushing 38 million– more than many countries. The State Meet should be incredible! Stay tuned.