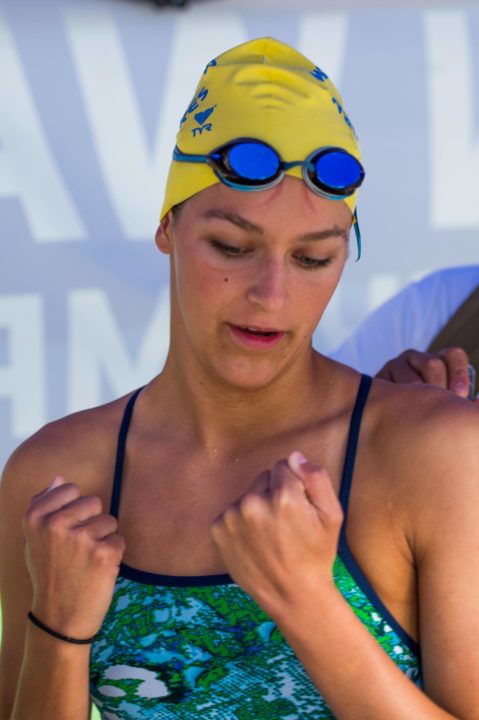 She walked away with her third-straight league titles in both the 200 and 500 freestyles, which are as close as she gets to her specialty of open water in the high school lineup, in dominant fashion.

This year, though, her last 50 wasn’t quite as good as we’ve seen in year’s pasts, splitting only 28.20. While the difference might not be enough to read into all that significantly, also consider that this year, the USA Swimming Open Water National Championships, which is Lorentzen’s big meet, is a few weeks later than it was last year.

Lorentzen came back to win the 500 free later in the meet in 4:52.92, which was also off of her typical time at this meet, and might be a better indicator of a shift in her training schedule for the mid-June open water nationals this year.

Despite Lorentzen’s efforts, her Capo Valley team came up short against Tesoro in the team title. Tesoro was led by Dominique Gray, with a 2:06.14 to win the 200 IM; and Mandy Barnes, who won the 100 fly in 56.77. Tesoro went 1-2 in both of those events.

On the men’s side, Capo Valley junior Nick Norman took the same double as his high school and Mission Viejo club teammate Lorentzen. First, he won the 200 free in 1:41.13, beating out Tesoro senior and Cal Poly commit Jeff Wynkoop (1:41.50). Wynkoop was out with a great first 50 and split his race very consistently, but Norman was too strong on his last 50 for Wynkoop to hang on.