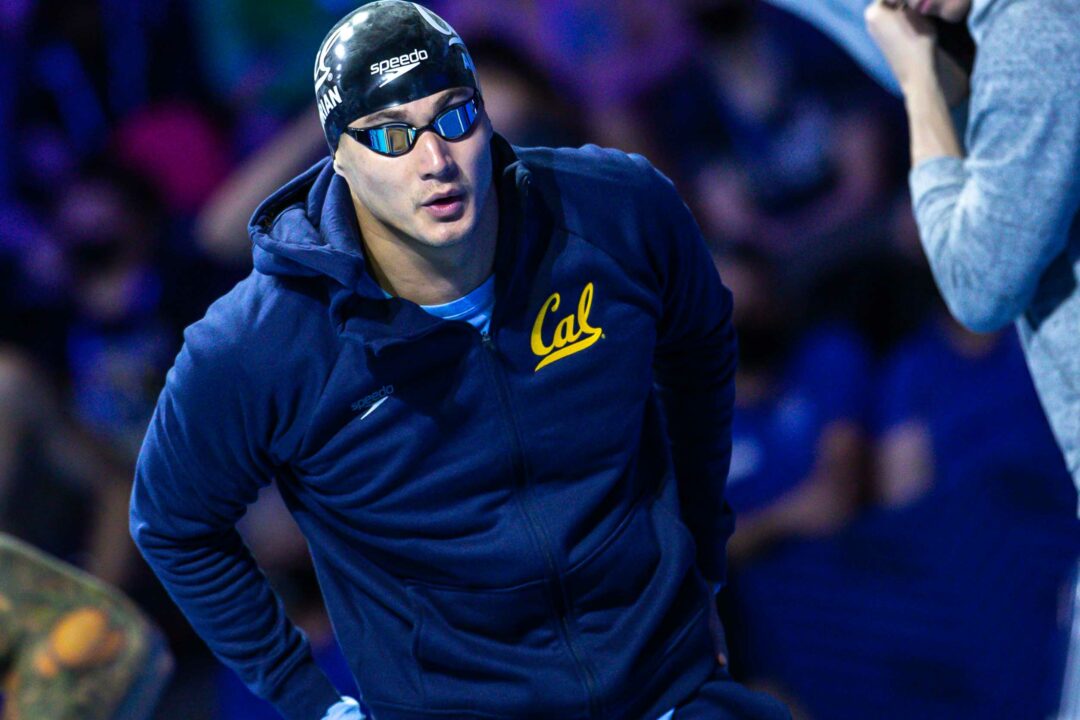 Adrian, an eight-time Olympic medalist, was a 10-time NCAA champion during his illustrious four-year career at Cal. Archive photo via Jack Spitser/Spitser Photography

BERKELEY – Six Golden Bear standouts have been elected into the 36th class for the Cal Athletic Hall of Fame, and they will be enshrined the weekend of Oct. 21-22 in Berkeley. The elite group includes Olympians, national champions, a long-time coach and the creator of the “Bear Territory” chant.

Those who have been chosen for the Hall of Fame are:

Formal induction ceremonies are scheduled for Friday, Oct. 21, at the annual Hall of Fame banquet. The ceremony will also include the induction of the Class of 2021, whose induction was delayed due to the COVID pandemic. Information on the location and how to purchase tickets will be available on the Big C Society website and will be announced once they are finalized. The new inductees will also be honored on the field during Cal’s Oct. 22 football game vs. Washington at FTX Field at California Memorial Stadium.

With the addition of the new members, the Cal Athletic Hall of Fame now features 331 individuals and seven rowing teams. The school’s Hall of Fame, which is located on the west side of Memorial Stadium and is open to all ticket holders after each home football game, was inaugurated in 1986.

One of the swimming world’s most prolific sprinters in history, Adrian is an eight-time Olympic medalist, including five gold medals, and has competed in three Olympic Games (2008, 2012, 2016). He won gold in the 100-meter freestyle at the 2012 London Games and more recently captured four medals at the 2016 Olympics in Rio. In addition, Adrian has captured 32 medals in major international swimming competitions. As a Golden Bear, Adrian helped lead Cal to the NCAA team championship in 2011. He is a five-time individual NCAA champion, winning the 50-yard freestyle in 2009 and 2010 and the 100-yard freestyle in 2009, 2010 and 2011. He also swam on five NCAA-title-winning relays. At the conference level, Adrian captured seven individual Pac-10 crowns and contributed to six Pac-10 relay titles. Named the 2011 CSCAA Swimmer of the Year, Adrian was chosen the Pac-10 Swimmer of the Year in 2009 and 2011. Adrian earned his bachelor’s degree in public health in 2012 and was a two-time CoSIDA Academic All-American. As a senior, he received the Tom Hansen Conference Medal as Cal’s outstanding senior male student-athlete and was named the Pac-12 Scholar-Athlete of the Year for men’s swimming & diving.

A 2020 Olympic silver medalist with Team USA and the 10th softball Olympian in school history, Arioto was a three-time NFCA All-American and three-time All-Pac-12 first-team selection. The 2012 Pac-12 Player of the Year led the Golden Bears to their most-recent conference title during her 2012 senior campaign. One of the three finalists for USA Softball Player of the Year in 2012, Arioto tops the charts on the Cal softball career record list in runs scored (222) and total bases (431), while also ranking second in walks (264), RBI (186), slugging percentage (.656) and tied for second in home runs (54). In 2012, she received both the Lowe’s Senior CLASS Award and the Tom Hansen Conference Medal as Cal’s outstanding senior female student-athlete.

A two-time All-American (1992-93) and three-time NCAA champion (1990-92), Arroyo played a critical role in Cal’s undefeated campaign in 1992. In addition, he established as a valuable member of the U.S. National Team during his time with the Bears and had an eight-year run with Team USA (1993-2000) – a stint that included Olympic appearances in 1996 (Atlanta) and 2000 (Sydney). Arroyo also helped lead the United States to gold medals at the 1994 and 1998 World Championships, the 1997 FINA World Cup, and the 1995 and 1999 Pan American Games. He played seven years abroad for five professional teams in Greece and Spain. Arroyo has served as the Long Beach State men’s head coach since 2006 and was the LBSU women’s head coach from 2009-20. He is currently the acting ODP technical director, overseeing the USA Men’s Development and Junior National Teams for the past five years. In March of 2020, he was selected for the USA Water Polo Hall of Fame.

Lehner led Cal to three consecutive national championships in 1991, 1992 and 1993, and the Bears’ team captain was named an All-American three times during his career. Lehner earned four Oxford Blues from 1997 to 2001 He also played professionally for the USA National Team, making his first appearance for the Eagles in 1995, and earned his cap 37 times, including at the 1999 Rugby World Cup. Lehner assisted the Cal coaching staff from 1994-96, and again in 2003-04. He earned his bachelor’s degree in political science from Cal and a master’s in history from Kellogg College at Oxford. Since 2002, he has taught social studies at Bishop O’Dowd High School.

Wright won 383 dual matches as head coach of the Golden Bears and led Cal to the NCAA Tournament 25 times, including a semifinal appearance in 2016 and a quarterfinal trip in 2003. A two-time ITA Regional Coach of the Year (1994, 2016), he was also a three-time Pac-12 Coach of the Year (1997, 2001, 2016). Wright received the ITA Meritorious Service Award in 2017 and in 2015, he was inducted into the USTA NorCal Hall of Fame. Over the years, Wright’s student-athletes earned All-America selections 20 times. The Berkeley native earned a BA in social science from Cal, where he played tennis as a four-year letter winner before competing as a professional player, Irish Davis Cup player and Davis Cup captain. In 1996, he served as the Irish Olympic tennis coach.

Anderson is the author of the “Bear Territory” chant frequently recited by Cal teams after victory to this day. A defensive back for the Cal football team, Anderson created the chant during the 1982 season. The four-year letterwinner received the Stub Allison Award as Cal’s most inspirational football player his senior year and he served as defensive captain for the 1982 Big Game famous for The Play. Outside of football, Anderson was a student-athlete peer advisor and a member of the Californians and Oski Dolls Association. Since graduating, he maintained a long association with the campus, including as a student-athlete academic advisor for the College of Letters and Sciences for 12 years, and as a member of Chancellor Michael Heyman’s Diversity Committee and the admissions committee.

For a complete list of inductees, please see the Cal Athletic Hall of Fame page on CalBears.com.

Not related to Nathan, but related to Cal. Absolute bombshell of an article came out regarding Teri. It’s absolutely disgusting and heartbreaking.

Yeah, that came out of nowhere…it maybe not.

This the one you’re referring to?
https://www.ocregister.com/2022/05/24/cal-swimmers-allege-coach-teri-mckeever-bullied-and-verbally-abused-them-for-years/amp/

Could only find an article on OC Register, behind a paywall. Any other open source? Or details? Will SwimSwam provide details?

I found it through Google News searching for Teri McKeever.
Congratulations Nathan. Always a class act.

It’s interesting – was NOT behind a pay wall when it first was released….they probably realized they could make money out of it and put up a paywall….profiting off tragedy…par for the course in today’s society i guess.

Wow, that was a very long read. My heart goes out to all the victims, and I hope that Teri is banned from USA Swimming for life. It’s unacceptable that administers looked the other way just because “she produces olympians”.

Where’s the article about Brett Hawke being the Bear’s new assistant coach?