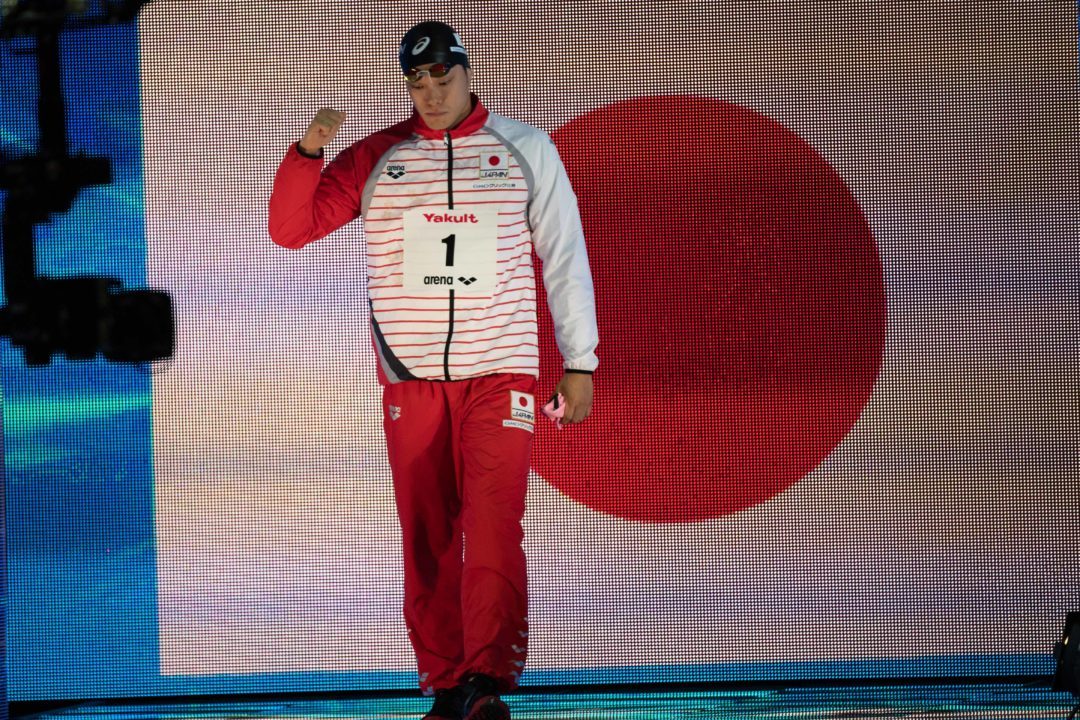 24-year-old Katsumi Nakamura threw down another impressive domestic performance with a 48.12 100 free (LCM). The question is, however, can this Japanese national record holder start translating his home turf success to the elite international stage in time for the 2020 Olympics? Archive photo via Mike Lewis/Ola Vista Photography

The annual Kirara Cup in Japan has been known to produce some big-time results in the past and this 2019 edition was no different. Several swimmers wreaked havoc on the world rankings when all was said and done in Yamaguchi, including eye-catching battles in the men’s 200m breast and men’s 200m free. Those will be detailed in our overall Kirara Cup meet recap appearing on our site shortly.

However, one Japanese man is continuing to produce notable individual sprint performances that deserve a closer look, even if those performances tend to repeatedly take place in the comfort of his own nation.

24-year-old Katsumi Nakamura caused a stir at the 2019 Kirara Cup in the men’s 100m free, where Nakamura produced a gold medal-garnering time of 48.12. That crushes his previous season-best mark of 48.51 he cranked out at the South Australian LC Championships last month and frog-hops him over fellow Asian swimmer Ning Zetao of China in the world rankings.

Nakamura’s effort also checks-in as his 3rd fastest, as well as the 3rd fastest performance ever by a Japanese man, only sitting behind his 47.87 National Record and additional sub-48 second outing of 47.99 from the Rio Olympic Games.

Despite throwing down historically wicked-fast, top-5 performances worldwide at domestic meets, including at this annual Kirara Cup, as well as the Kosuke Kitajima Cup and Konami Cups that typically take place in quarter 1 of each year, Nakamura has been inconsistent when translating those same times to international competitions.

For instance, at the 2017 World Championships, Nakamura didn’t make it into the semi-finals of the men’s 50m freestyle, mustering just a 22.32 for 23rd, despite having clocked a PB of 21.97 earlier that same year. The same held true in 2017 for Nakamura’s 100m free in Budapest, where the national champion earned a prelims time of just 49.10 to get shut out of the semi-finals, despite holding a 2017 best of 48.26 from that April.

Even somewhat closer to home, Nakamura didn’t quite swim up to par, settling for silver behind teammate and former national record holder Shinri Shioura at the 2018 Asian Games. Despite Nakamura entering Jakarta with his newly-minted 47.87 100m free national record from the Konami Cup last year, he wound up cranking out a much slower 48.72 for that silver behind Shioura’s 48.71.

Bottom line, Nakamura has proven he has the talent, owning Japan’s top 10 100m freestyle times ever, but the sprinter needs to find that extra ingredient to carry his domestic performances over onto the big stage when he will encounter the likes of American Caeleb Dressel, Russian Vlad Morozov and the aforementioned Zetao.

But, Nakamura is still young and will be in his prime of just 26 years of age once the 2020 Olympic Games come next year. Hosted in Tokyo on his home turf, the Olympics may just prove to the be the one elite international competition where the Asian talent can finally pound out an Olympic medal-worthy performance when it truly counts.