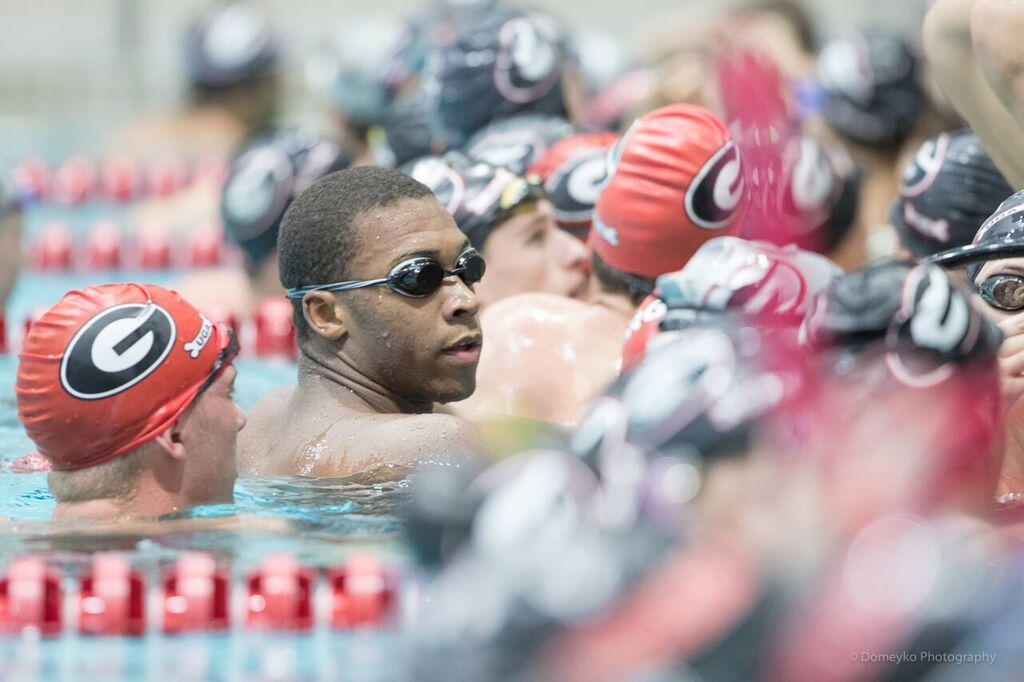 Freshman Murphy is a key player for Georgia in the butterflies this season. He swept his specialty against the Wildcats, clocking in with time of 48.19 and 1:47.11 in the 100 fly and 200 fly respectively. Archive photo via “Rafael/Domeyko Photography”

Georgia hit the road this weekend, traveling to Evanston for a dual meet with Northwestern on Saturday. Both the men and women beat the Wildcats handily, with the men sweeping the events.

The Bulldogs’ Javier Acevedo pulled off an individual triple to help them to victory. He was the only man to break 21 in the 50 free, picking up his first win in 20.42. Acevedo then won the 200 back by over 4 seconds, turning in a winning time of 1:46.09. He was dominant again in his final race of the evening, taking advantage his middle-100 to outpace teammate Camden Murphy with a 1:50.85 to Murphy’s 1:53.30.

On the women’s side, freshman Courtney Harnish was the top performer, winning 2 individual races. She battled closely with freshman Olivia Anderson down the stretch, with Harnish pulling ahead with 100 to go and then Anderson making a late charge in the final 50 yards. At the finish, Harnish had the edge, 9:53.29 to 9:53.97. Harnish came back to win the 200 back, posting the only sub-2:00 to win in 1:59.10 ahead of teammate Megan Kingsley (2:00.77).

EVANSTON, Ill. — The Georgia swimming and diving teams each improved to 4-0 on Friday as they swept Northwestern at the Norris Aquatics Center.

“We got all out of the two road meets that we wanted,” said Jack Bauerle, Georgia’s Tom Cousins Head Swimming and Diving Coach. “We had back-to-back good days of racing. We were solid and we were consistent, and that’s what you look for. It was a job well done getting a couple of wins and now we’ll get back to work.”

The 200 medley relay of Stewart, Caitlin Casazza, Kingsley and Burchill won with a time of 1:41.58, while the 400 freestyle relay of Burchill, Kingsley, Harnish and Casazza took first in 3:28.52.

Georgia will return to action next week at Florida. The 1-meter diving competition will take place Thursday at 6 p.m., followed by swimming and 3-meter springboard Friday at 10 a.m.

EVANSTON, Ill. – Northwestern swam season-best times in 10 events on Friday afternoon, but fell to No. 8 Georgia, 174-109, at the Norris Aquatics Center.

The ‘Cats got things started by finishing second and third in the 200 medley relay. The team of Jack Thorne, Will Hofstadter, Ryan Tate and Almog Oshtein finished second with a time of 1:32.43. Posting a season-best time of 1:32.83, Tyler Lis, Thanas Kountroubis, Arjun Sharma and Keegan Bundy finished third.

Senior Almog Olshtein and first year Keegan Bundy finished second and third in the 50 free with season-best times of 21.07 and 21.11, respectively.

In the 200 free, first year Peter Lewczyk finished in 1:43.72, his best time on the season. He was also a part of the 400 relay team with Will Hofstadter, Keegan Bundy and Ryan Tatethat took second.

Tate also added two individual second-place finishes for the #B1GCats, coming in just after the leader in the 100 free and 100 fly.

In the 100 breast, junior Thanas Kountroubis posted a time of 57.70, a season-high. First year Lyon Zhang also posted a season-best in the event, finishing in 58.98.

The ‘Cats return to action tomorrow at 10 a.m. in the Norris Aquatics Center against Georgia Tech.

EVANSTON, Ill. — The Northwestern women’s swimming and diving team picked up five individual first-place finishes and set a better standard in eight events in its season opener versus No. 4 Georgia Friday afternoon inside the Norris Aquatics Center.

The Wildcats fell to the fourth-ranked Bulldogs, 167-126, and will be back in action on Saturday at 10 a.m. versus Georgia Tech.

Angus, competing in her first collegiate meet, picked up the Wildcats’ first win in the 100 breaststroke in 1:03.81. Angus’ mark was one of the eight events the Wildcats set a better standard in compared to their season-opening meet a year ago.

Warren and fellow senior Anna Keane picked up back-to-back wins in the 50 free and 100 free. Warren topped reigning Southeast Conference swimmer of the week Kylie Stewart by .13 seconds in the 50 free, while Keane swam the fastest 100-free time she has ever posted in a dual meet at 51.47.

Sheridan picked up the Wildcats’ fourth win of the night in the 200 breaststroke in commanding fashion, finishing over four seconds in front of the closest competitor.

Reigning platform national champion Olivia Rosendahl picked up right where she left off last season, finishing first in the 1-meter springboard with a 300.30 and second in the 3-meter with a 312.30. Junior diver Eryn Scannell finished just four points shy of her career best in the 3-meter to finish fourth.

Sophomore Irune Andres put together an impressive evening with a 10:27.52 in the 1,000 free, besting her previous top time by over 16 seconds. Classmate Nicole Aarts also had a strong showing in the 200 back and 100 fly.