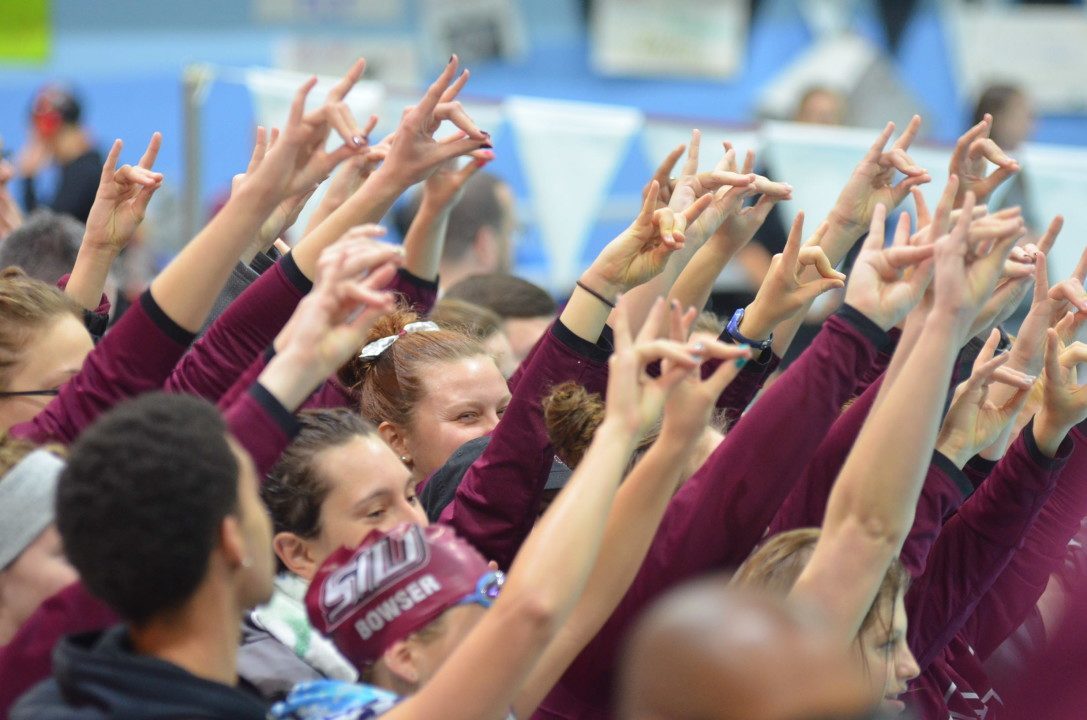 US National Teamer Erica Sullivan is the top seed in the women’s 800 free on Thursday, the first day of the 2021 Pro Swim Series.

The Southern Illinois University men and women beat both McKendree University and Truman State University at a tri meet hosted by McKendree on Saturday, October 21st. SIU’s Bryn Handley won the 200 and 500 free. Handley’s winning 200 free time of 1:50.94 ranks as her 7th fastest 200 free ever, and her fastest dual/tri meet performance. Her winning 500 time of 4:56.74 also ranks as her fastest performance ever at a dual/tri meet.

The Salukis were dominant in the pool all day, but perhaps where the team was most successful was in the diving portion of the meet. Southern’s divers won all four events and logged five scores that place Salukis inside the top-50 in the nation.

On the Men’s side, sophomore Eli Mercado set personal bests in both the one and three-meter dive. In the three-meter, Mercado’s score of 345.52 gave him a 159.75-point victory over McKendree’s Thad Zuber. The score is currently the 43rd best in the NCAA.

In the one-meter dive, the Salukis were just as successful. Mercado’s score of 340.27 is good for 33rd in the NCAA and was personal best. On the Women’s side, Beibei Ji and Williams both set personal bests with their 1-2 finish. Beibei’s score of 299.77 is currently 20th in the nation and Williams 276.45 beat her previous personal best by 14.4 points. Baobao Ji was third and Cieszynski was fourth.

For Naude, she added to her first and second place finishes in the 400-yard freestyle relay and the 200-yard medley relay with a first and second in individual races. Naude won the 100-yard backstroke with a time of 58.56. In the 100-yard butterfly, junior Emma Brazeau was first with a time of 57.66, Nuade was not far behind her in second, just four one-hundredths of a second slower.

In the women’s 1000-yard freestyle, Walker notched her first victory of the season with a time of 10:31.69. Fuller was second in the race.

Junior Audrey Snyder earned Southern a victory in the 200-yard butterfly with a time of 2:05.64 for the fastest Saluki time in the event this season.

Carvalho had a solid day for the Salukis as well. She won the 200-yard backstroke with a time of 2:05.10 to beat the previous best Saluki time of the season by two seconds.

On the men’s side, freshman Sam Drew continued a strong start to his Saluki career with two victories in the breaststroke. Drew’s time of 57.96 earned him his first victory of his young career. Sophomore Chris Phillips and freshman Kyle Berquist rounded out the top-three for Southern. In the 200-yard breaststroke, Drew swam the event in 2:06.02 for the fastest Saluki time of the season by more than four seconds. Phillips and Berquist were first and second to round out the top-three for Southern in both breaststrokes.

Drew also helped the Salukis to a win in the 200-yard medley relay. The team of Drew, Phillips, senior Alex Crawford and sophomore Benson Jones swam the race in a time of 1:35.68 for the 106th fastest time in the NCAA this season.

Crawford also earned two wins in the meet. The first came in the 200-yard backstroke with a time of 1:51.17 besting his previous time of 1:52.77 for a new season-best for Southern. The Saluki senior’s time in the race is currently 107th in the NCAA.

Crawford was also first in the 100-yard backstroke with a time of 51.50. Sophomore Ryan Lehanewas third in race with a time of 52.83. Crawford helped Southern to a third place finish in the 400-yard freestyle relay. The team of Crawford, Jones, junior Reilly Garman and senior Michael Wolfeswam the race in a time of 3:11.09. It is the fastest time in the race for Southern this season. Southern’s time ranks 97th in the NCAA this season.

Senior Michael Wolfe returned to competitive action in the meet. He took fifth place in the 400-yard freestyle. Wolfe has been rehabbing an injury throughout the early part of the season.

Women’s Swimming & Diving
The women’s swimming & diving team took three first place finishes and four second place finishes on Saturday. Sophomore swimmer Milica Sostarec (Subotica, Serbia/Medical High School) came out flying taking first place in both of her individual events including the 50 freestyle and the 100 freestyle. Freshman Karlie Rimat(Stanwood, WA/Stanwood High School) took first place in the 400 Individual Medley with a time of 4:30.62, which is just 0.05 seconds off pace from an NCAA B qualifying standard time. Rimat took second in her other event, the 200 butterfly. Freshman swimmer Meredith Geyer (Germantown, TN/Germantown High School)continued to impress taking second place in all three of her individual events, including the 200 freestyle, the 50 freestyle, and the 200 backstroke.

McKendree swimming & diving is back in action at the University of Indianapolis for the UIndy Invitational on November 3rd and 4th.

LEBANON, Ill. – The Truman State University men’s and women’s swimming teams hit the road for the first time this season on Saturday in a tri-meet featuring the Bulldogs, host McKendree and Division I Southern Illinois. On the men’s side, Truman fell to the Salukis, 158-130, and the Bearcats, 171.5-118.5. For the women, they lost to Southern Illinois, 238-70, but defeated homestanding McKendree, 145-129.

Starting with the men, they won two events including the 50 free and 400 IM. Sam Heveroh and Will Shanel took home those titles with times of 21.37 and 4:05.60, respectively. As far as second- and third-place finishes, Truman achieved such honors six times and two times, respectively.

The Bulldogs were the second-best finisher in two events including the 200 medley relay and the 400 free relay. In the medley relay, it was Riley Brown, Mark Franz, Caleb Kruse, and Sam Heveroh with a time of 1:35.18. In the free relay, the four swimmers were Lliot Gieseke, Jack McCormick, JT Thayer (pictured), and Heveroh with a mark of 3:10.02.

The women didn’t take home any titles, but secured a second-place finish in two events and a third-place showing in four of them. In second was the 200 medley relay (Grace Fodor, Natalie Galluzzo, Libby Opfer, and Nikki Sisson) with a time of 1:49.73 as well as the 100 free (N. Sisson) with a mark of 53.48.

Next up, both Truman squads will be at William Jewell on Saturday, Nov. 4 with the action set to begin at 1 p.m. from Liberty, Mo.