Ryan Murphy Swims Fastest Ever 50 Back with 20.20 Relay Split 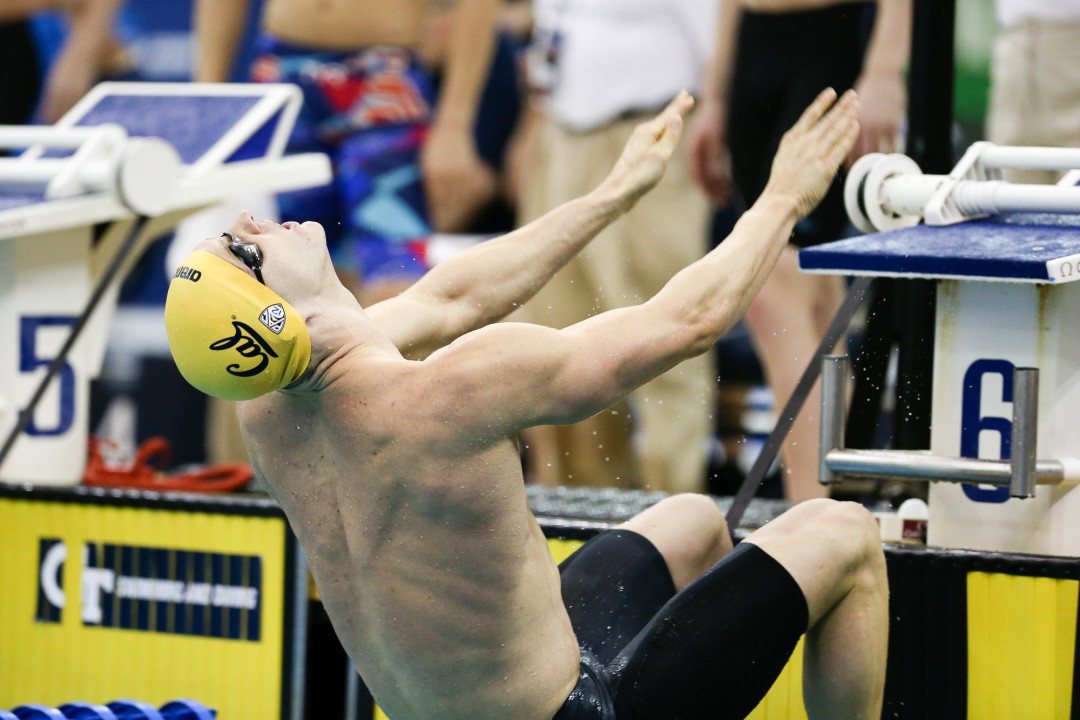 Cal's Ryan Murphy rolled to another historic swim as the backstroker on the Golden Bears' 200 medley relay. Murphy split a 20.20 on the lead off, clearing the previous mark of 20.35 done by Junya Koga in 2014. Current photo via Tim Binning/TheSwimPictures.com

Cal’s Ryan Murphy rolled to another historic swim as the backstroker on the Golden Bears’ 200 medley relay. Murphy split a 20.20 on the lead off, clearing the previous mark of 20.35 done by Junya Koga in 2014.

That was a best time by Murphy. He swam a 20.69 on Cal’s relay in finals last season and 20.49 in prelims today. His time tonight was over four tenths faster than the 20.84 he swam on Cal’s American Record setting relay in 2015 NCAA prelims.

Compared to the rest of the field, Murphy was over 7 tenths faster than anyone else. The next fastest men on the backstroke split were Alabama’s Connor Oslin with 20.86 split and Georgia’s Taylor Dale with a 20.82 split.

Murphy is now the fastest swimmer in history across all 3 backstroke distances in short course yards. Before swimming the fastest 50 ever tonight, he won the 100 backstroke in record setting fashion with a 43.49. His top mark in the 200 back is a 1:36.77. After his strong showing tonight, he’s the clear favorite to win another NCAA title in that event and break his own American Record.

Schooling nabbed the 50 fly fastest split tonight as well (with the 100, too, obviously). If he gets the 200 record tomorrow, that’ll give Bolles a complete sweep of the fastest back and fly at all distances, plus the 50 free (and potentially 100 free)

…I forgot they were all Bolles kids. Damn.

Pretty much the top 3 swimmers at this meet, Haas notwithstanding.

Backstroke ledge is worth how many tenths? Discuss.

I like the idea of the ledges but I think they need to stay below the water line. It did not seem like much of an in water start the way some of the teams had them set up.

This is just me…but I feel anybody discussing the merits of the ledge are pre 90s…as long as Colorado or Omega pads are properly fastened in it is ridiculously easy to get a perfect start of off them. As someone that swam my whole LSC career watching Murphy swim, there is nothing in my mind to denigrate that 20.2 and 43.4, next level swimming