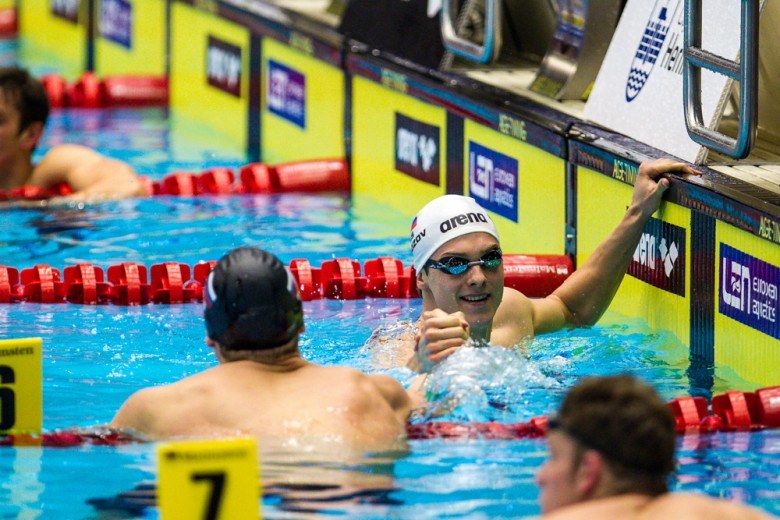 Vladimir Morozov recorded a season's best and the world's number two time in the 50 freestyle winning the event in a time of 21.65... Current photo via courtesy of Jesper Nielsen, www.sttfoto.dk

Vladimir Morozov and Yulia Efimova both finished the Russian National Championships with strong performances on the final day of competition.

Andrey Grechin finished second in a time of 22.03 which ties him with Cameron McEvoy for the eighth place spot in the world rankings. Grechin’s time is also faster than the World Championships qualifying standard. Evgeny Lagunov finished third in a time of 22.32.

Yulia Efimova was impressive her win in the women’s 100 breaststroke taking the event in a time of 1:05.90. Efimova was one one-hundredth of a second off her season’s best of 1:05.89 which she posted in March and currently sits atop the world rankings.

World record holder Ruta Meilutyte is the only other woman to have broken the 1:06 mark this year posting a 1:05.99 in March.

Efimova was the only woman in the event to swim faster than the World Championships qualifying standard.

Efimova also collected a silver in the women’s 200 IM finishing second to Viktoria Andreeva. Andreeva took the event with ease winning in a time of 2:12.31 more than two seconds ahead of Efimova who finished in a time of 2:14.67. Her time puts her under the World Championships qualifying standard.

Natalya Lovtsov took the women’s 50 butterfly in a time of 26.05 tying her for sixth place in the world rankings. Lovtsov’s improvement in the event is extraordinary and simply unheard of as her lifetime best going into the event was a 27.37. With her time she sets a new Russian national record beating Svetlana Chimrova‘s mark of 26.24 which she set last year.

Daria K Ustinova was the only woman to break the one minute barrier in the women’s 100 backstroke taking the event in a time of 59.89. Ustinova’s time is under the World Championships standard and also places her sixth in the world rankings. Her lifetime best is a 59.78.

Semyon Makovich and Alexander Osipenko battled for the men’s 400 IM crown with Makovich coming out on top by three tenths of a second winning the event in a time of 4:17.73. Osipenko finished second in a time of 4:18.03 followed by Alexander Tikhonov who posted a 4:21.49.

All three men finished under the World Championships qualifying standard.

some philosopher somewhere said something along the lines of “if your not first your last” I think it was rickey bobby.

Good 200 times, but expected a lot more from Izotov.

Russia who could be a contender on 4×200 won´t cut with these times.

Morozov 50 free was great, but if he was tapered his time won´t make the time needed for medal against Manadou Cielo and Fratus tapered (sub 21,4 probably for all)

The women medley relay is good, but Ustinova is not as good as Zueva, and the Fly leg disappointed a little..

The men medley which could be bery good will suffer from the weakest breast leg of all the teams who can qualify for final..

Can Morozov fake his way through a lot 100m Br?

I think if he tried that we would probably see him with a piano on his back on the last 25 swimming to a slow death..

Great 50 free time for morozov, i think manaudou, fratus, cielo and morozov will fight for the medals. Its really sad that sedov didnt compete, i think he couldve been as fast as 21.8 at least. Mens 200 free is a really good event in russia, i think only australia and gb have a better depth in mens 200 free. On the other hand it will be very difficult for all the russian guys to reach the individual 200 free final. What happened with izotov? He was more than 2s slower than at 2013 wc. Ustinovas time is great for a girl born in 1998, but i thought she would swim a new pb, because she was about 1s faster… Read more »

JPN probably can put a faster 4×200 than Russia, same for France and US now.. unless the Russian Bounce Back on Kazan