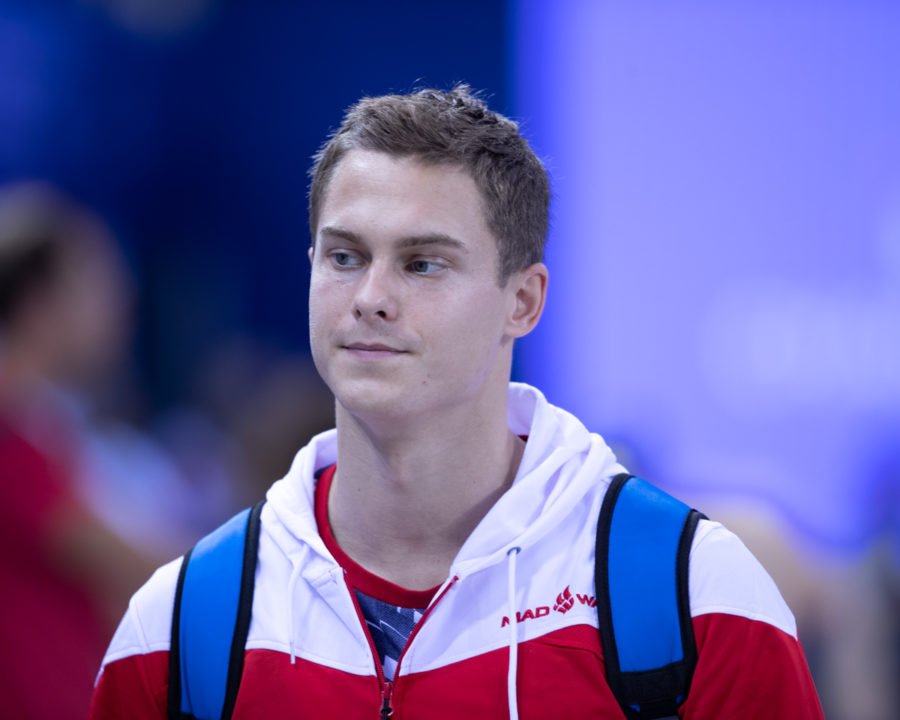 Though Morozov once again advanced to the skins final in Budapest, he was overtaken by nearly a body length by London Roar's Kyle Chalmers Current photo via “Rafael/Domeyko Photography”

Once again, a swimmer from each team advanced to the semifinal, with Vlad Morozov (Iron) leading the way.

Michael Andrew got off to a good start and turn, but Kyle Chalmers and Vlad Morozov — swimming next to each other — will advance to the finals.

Chalmers, breathing ever stroke, pulled ahead over the last 15 yards or so to take the win. Both he and Dressel swam 21s on all three rounds in their wins.

Just like the women’s skins event, all four teams advanced one swimmer to the 2nd round, with Vladimir Morozov leading the pack with a 20.90 for Iron. Kyle Chalmers of the Breakers, Nathan Adrian of LA Current, and Kyle Chalmers of London Roar also advance. Morozov led through the first 25 meters of the 2nd round but was overtaken on the 2nd lap by Chalmers, who touched first. Chalmers and Morozov advance to the final round and will earn triple points. Adrian and Andrew do not advance but still earn double the regular points for their efforts. Chalmers takes the victory in round 3, breathing every stroke yet still managing to hit the wall in under 22 seconds. Chalmers and Caeleb Dressel, the skins champion from Naples, swam 21s in all 3 of their 50s in their respective skins events this weekend and two weeks ago. In terms of team points, Chalmers brings in another 27 points for Roar while Morozov pulls in 21 for Iron, crucial to their 2nd-place campaign in the team standings.

All the new racing, and money-making, opportunities for the professional swimmers seem great, but I wonder how the constant racing, travels, etc. impact the top-level performance. It would be interesting to see the number of new world records at the 2020 Olympics and the relative performance between ISL swimmers and “amateur” swimmer at those games.

I was wondering the same thing